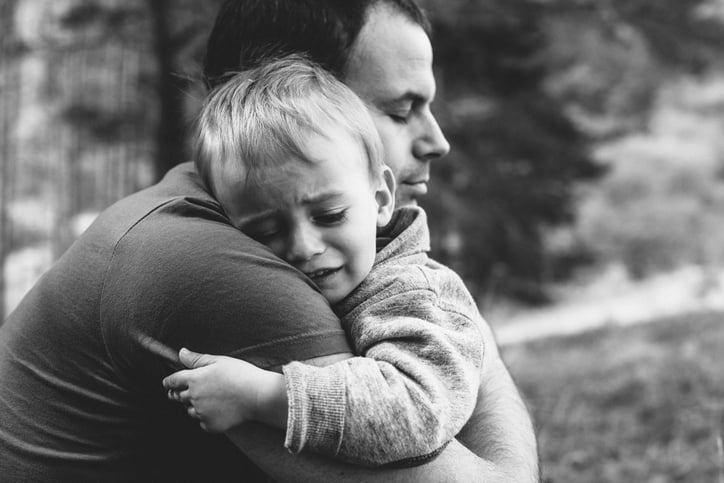 It seems like a new celebrity father gets divorced every week. Newly-divorced or separated dads in 2011 alone include Kelsey Grammar, James Marsden, John Mellencamp, Marc Anthony, David Arquette, Troy Aikman, Dylan Walsh and George Lopez —and those are just the famous ones. Roughly half of all American marriages end in divorce and some studies suggest 60% of those splits involve children.

But while there’s abundant advice directing divorced fathers to avoid “screwing up” the kids, there’s little out there to help dads appreciate the big parenting opportunity—yes, opportunity—before them.

Below are, IMHO, the ten most important things divorced fathers should realize as they transition parentally from “Husband and Father” to “One-and-Only Dad”:

1) You divorced your ex, not your kids

While some divorced dads disconnect from their kids when they separate from their ex-wives, the divorce can actually be an opportunity to re-connect with your children. Make the most of that opportunity.

2) The only parenting expectations worth a damn are your own

Divorce frees you from not only your ex-wife’s expectations, but those of your parents, her parents, Dr. Phil, and all those dads you see talking joyously about fatherhood on Jay Leno. You’re the expert when it comes to your kids. Create your own expectations and standards.

3) There’s no such thing as a part-time dad

You’re either a dad or you’re not. Many divorced dads spend more time with their kids than fathers in intact families—think of dads in the military, or dads who work 12-hour days. Do we judge their dadhood by how much time they’re able to spend with the kids? No matter how much time you spend, if you commit to it regularly and responsibly, you’re a dad. Period. Exclamation point.

4) You are not a babysitter

There’s no need to constantly take your children on expensive adventures, shower them with gifts, or keep them perpetually entertained, as if filling a perceived hole in their happiness. They are just as happy to simply be with you as you are to be with them.

5) Your children have two homes … and two sets of rules

Your kids don’t “visit” you; they live with you. They have one home with Mom and another with Dad. And if they can adapt themselves to different rules between home and school, they can do the same between home and home. The phrase “but Mom lets us!” carries no more weight in your home than “but Dad lets us!” does in hers.

There’s an “inner dad” inside you. He’s the one who tells you when it’s OK to let your son stay up late, when it’s appropriate to be interrupted on the phone by a whining daughter, and whether a tense situation calls for stern rules or just an all-out, no-shoes family wrestling match. You’ll get to know that inner dad gradually, moment by moment, and in the process become a more genuine dad—the best kind of dad you can be.

7) Most kids can cope

Divorce doesn’t necessarily mean you should start booking therapy for your kids. Studies show that many children cope well with divorce, especially if there’s joint custody and the kids are encouraged to openly express their feelings and fears. When I got divorced, a quick Internet search told me I was ruining both my own and my children’s lives. But it didn’t go down like that. In fact, I now feel like a better dad than I’ve ever been, and I’ve stopped treating Google like my surrogate conscience.

Too many moms and dads feel martyrdom is a necessary part of the parenting process. Find those things that you and your children honestly enjoy together—going to the movies, having cart-races at Kmart, bowling, or impulsively getting pizza in the mid-afternoon. Your children love nothing more than watching you enjoy yourself with them. And it’s way more fun than sitting on the playground sidelines checking your iPhone, isn’t it?

Like the corn and mashed potatoes on your first-grader’s plate, your parenting should be separated from any conflicts you have with your ex. Children need to know their parents’ love is unconditional and impenetrable, even—and especially—in the face of something as potentially devastating as divorce.

Making mistakes is as fundamental in parenting as making dinner. Own up to them. Your kids will learn that they can make mistakes too.

We’re having a conversation about what it means to be a good man in the 21st century. Care to join us? Receive our daily or weekly email. Sign up here.

Currently going through divorce,im active duty and have raised our son since he was born but is not my biological. Not that it matters. I just want to say thank you for the 10 pieces of advice…never looked at it that way.

I have been a good father and husband for 17 yrs but one day the wife decided she was unhappy and asked for divorce. It’s been almost one and a half years of separation now and we are about to divorce (right after settling our finances). We have tried to do this amicably and so far things are working okay but sometimes my ex talks very abrasive and disrespectful to me. She gets greedy at times and has said cruel things to me. This leads to arguments at times (over the phone) and that’s when I say mean things to… Read more »

From the ex-wives’ experience a couple of things that should be added here instead of reclaiming ones fathering rights don’t lose them to begin with. Being involved from day one and not taking a “babysitter” role ever is what will give not only the ex a feeling that the children will be cared for when with their dad but the courts also. Second while it’s important to do things your own way make sure you’re being grown up dad. Many try to bring the kids for the weekend into a bachelor lifestyle. While you may not be married anymore, you’re… Read more »

Great piece. Another thing I woud add is not to get into a competition trying to always buy or do more for your kids than your ex. You’ll go crazy and bankrupt yourself. Also make sure your focus is on your kids … especially in the early days.

Hello, I’m alex. I’m 21, and I’m a separated father..and in need of advice of what to do now. I’m very clueless on what to do, well I work right now, part time at a local hardware store, and part time maintenance . I just want help on what to do..I just need some one to follow, and listen..

Read the post, find other separated and divorced dads to talk to, and just remember:

a) You’re not alone
b) You’re still a Dad and no one will take that title from you.

My book may help — not advice so much as stories that relate — http://www.bookfordad.com.

Brian, it’s very encouraging to read your post. My oldest is 8, my youngest is 4, and I’m on the verge of divorce.

I’m carrying around a lot of guilt right now about how I failed my wife and, as a result, my kids. I’m getting therapy for the guilt, but it’s good to know that losing a strong relationship with my kids isn’t inevitable.

There should be a supplemental handbood and require course BEFORE you get married. They don’t teach you HOW TO DEAL; especially during your first holiday separated from your pride and joy.

Wonderful insights and thoughts, thank you.

I have been divorced for over 11 years and my two sons are now both over 18 and good men.

I was “under-qualified” as a husband, and as you say getting divorced was my opportunity to be the best father I could be.

And I am reaping those rewards now as my relationship with my sons is strong and intact.

Great blog post! Thanks for the advice, and keep up the good work!

Your time is the most important gift.
And time away is your worst enemy

Wow! Sebastian sounds like his wife has him by the balls.

This article reveals this dad’s self-centered (and almost teenaged mentality of “you can’t control me, ex-wife!”) perspective, which is the most pervasive reason why men find themselves divorced in the first place. Per the Pressmans of Rhode island, who wrote “The Narcissistic Family, Diagnosis and Treatment,” self-centered parents beget self-centered children. Children of divorce are 4 times as likely to become divorced themselves. And the cycles of dysfunction live on. (It’s antidote: “The greatest gift a father can give his children is to treat their mother well.” ~ Abraham Lincoln)

““The greatest gift a father can give his children is to treat their mother well.” ~ Abraham Lincoln) Is that really an Abe Lincoln quote? Never heard it. I prefer the Coach John Wooden version: “The best thing a man can do for this children is to love their mother.” IMO coash Wooden’s version is far superior because you can treat almost anyone “well.” Obviously, loving their mother implies many things well beyond just treating her well. One of the by products/related-benefits of loving your wife is that you are also very unlikely to not be a good father. The… Read more »

Given a society in which a) 50% of marriages end in divorce (and I would suggest, most for good reason) and b) children are NOT automatically scarred by divorce itself but by the immaturity of their parents (whether divorced or not), I’d hope you’d agree with me that it’s more important to help Dads reconnect with their kids post-divorce, than to castigate those Dads for making what in your mind alone is a bad decision. The many Dads I’ve spoken to find a new confidence in knowing they’re not alone and seeing this result as an opportunity to form a… Read more »

Let’s be clear, what’s done is done. I agree that there is not much value in castigating someone for something they can’t change. Your suggestions for divorced dads, IMO, seem balanced and reasonable.

However, divorce often is a bad an unnecessary decision; and there is clear value in helping men (and women) who are still married, especially those who are struggling, to appreciate how important it is to and for their children to keep their marriages intact, stable, and reasonably happy.

The vast majority of divorces are for trivial reasons – and initiated by the mothers. Divorce harms children. The statistics on this are clear.

The question is if the ex-wife agrees with that all.

For many fathers it is impossible to keep contact with their children, as visitation rights often are not respected.

Isn’t most of that just things Dads need to know in general, regardless of marital status?

Yes, absolutely. But when men get divorced they are immediately distanced from their kids and, as a result, more likely to fall from responsibility. It becomes harder to realize the points I make, which is why I share them. Too much of the help for divorced dads focuses on legal and logistical advice for mitigating damage, not creating opportunity. FacebookTweetPinEmailShares547
wpDiscuz
22
0
Would love your thoughts, please comment.x
()
x
| Reply
Share this ArticleLike this article? Email it to a friend!
Email sent!