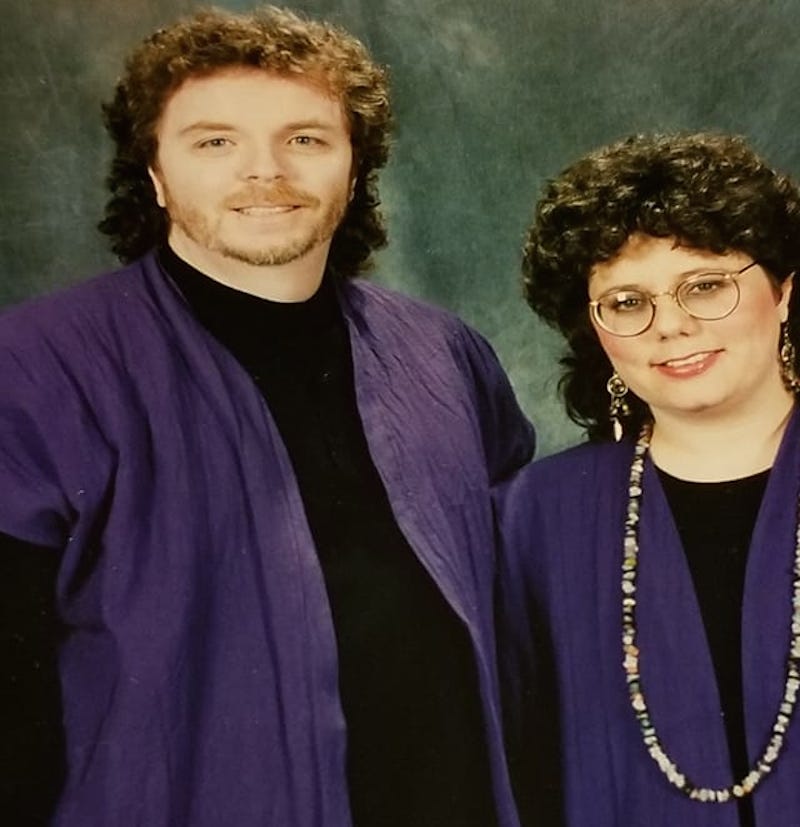 Curly-haired moptops circa the mid-1990s. (both courtesy of perms). Twinning it as far as outfits were concerned with get-up ordered from a catalog of organic cotton clothing, called Deva. That, combined with the multi-colored stone necklace and earrings labeled us “New Agey”.  Makes sense since, for 10 years, we published a magazine called Visions that focused on holistic health, spirituality, environmental concerns, as well as peace and social justice. We met at a Ram Dass lecture and our first date was The Great Peace March. What does that tell you?

The woman I was back then was far more timid, co-dependent, and people-pleasing than the 62-year-old who is telling this tale. My husband used to say that I was ‘an emotional contortionist who would bend over backward to please people,’ ‘a deer caught in the headlights when it came to making decisions,’ and ‘I was always looking over my shoulder to see if the propriety police were watching’.

When Michael died, coming up on 22 years ago 12/21, that aspect of me did too. Those who have met me since then, could not have imagined how I navigated the waters, splashing around, treading water, and sometimes feeling as if I was drowning. Good thing I had been a lifeguard in my late teens and early 20s. My ‘savior behavior,’ took hold, by which I thought I had to heal, save, fix, cure, kiss all the boo-boos, and make them better. Tragically, I couldn’t do that for my husband who had his own wounds that no amount of love could bind. His childhood traumas, combined with a true desire to do good in the world were at odds with each other. He wanted to be seen as worthy. I wonder now whether he had an underlying depression, blended with the belief that he would never be enough, do enough, or have enough. He was good at so many things, cooking, music, writing, problem-solving, sewing, managing, and organizing among them. Many years after he passed, someone close to us asked me that if I thought he had OCD, could I have understood him better? A control freak at times. He wanted things to be ‘just so,’ predictable and orderly. Truth is, life is messy. People are unpredictable. Patience was not his strong suit. He covered his insecurities with bluster, anger, and some would say arrogance.

I have compassion for that younger version of me that accepted the chaos, panicked that despite support and marketable skills, I couldn’t bring myself to leave the marriage. A year or so ago, in conversation with my now happily married 33-year-old son, he reminded me that had I left with him and we moved to Florida to temporarily stay with my parents who would have gladly taken us in, he would not have met his wife. As I watch him with his own son, now a dynamo on legs who walks, climbs, cuddles, and drools, my heart leaps at the man he has become, either in spite of or because of the example set by his own father. A few years ago when communing with Michael as I do often, I told him that I wished he had been kinder and more patient and that being dead didn’t let him off the hook. He still needed to be there for his son. Now that he is a grandfather, I remind him that as an ancestor, he has an additional job of watching over his grandson.

Now I don’t hesitate to speak out, albeit with compassion and without hate. I am no longer willing to sell my soul for love and approval as I did then.

My stretch has been to have compassion for Michael. If I had walked a mile in his shoes, I might have developed as he did. He had a good heart, but it was clouded over by his fears. A few years after he died, a talented psychic friend who knew nothing about our personal life; only acquainted with us professionally, since she had advertised in the magazine, gave me a reading. She told me that Michael was standing behind her and was crying. He said to tell me that I was right. “Right about what?” What wife doesn’t want to hear that she was right? “You were right about his anger. It’s what killed him.” (He died of Hepatitis C which caused liver failure). Since the liver detoxifies the body, it has been metaphorically referred to as ‘the seat of anger’. Makes sense to me that the anger was more potent than his liver could handle. He said, “You were his heart and he is sorry for anything he said or did that was hurtful.” At that moment, I too began to weep for the two people who had love between them but had not been able to overcome the shadow that hovered over them.

He was 48 and she was 40 when the life support was turned off and at the moment he exited the pulverized body that had sustained 5 1/2 weeks of care in the ICU, she cried tears of relief. Relief that he was no longer in pain. Relief that she could finally sleep through the night. Relief that she would no longer need to contemplate leaving since he left first.  I use the reference ‘she’ because I am no longer that same person. As I approach two decades plus two years, I gaze back down the timeline and see all I have survived and thrived through. Health crises; one that almost had me joining him on the Other Side, single parenting, job changes, financial challenges, relationship ups and downs, the deaths of both of my parents and dear friends. What sustained me was the love and support of those dear to me. Occasionally, I get the sense that he is proud of the woman I have become. I know I am.

The Rose sung by Bette Midler was our wedding song and it was a portent of all our relationship had become.