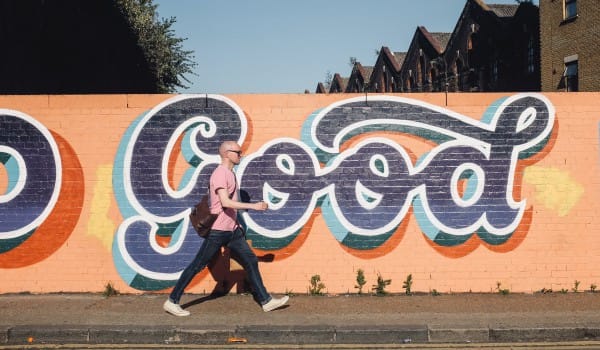 I remember my mom saying these words to me when I wanted to start dating. The words pressed pause in my psyche and made me question my heart. Was the guy who asked me out not good? Was my mom giving me this warning for a reason? Did she not trust my judgment? Or, were good men really as rare as my mom said they were?

I learned my mom didn’t make those words up. They were born from a short story written in 1955 by American female author, Flannery O’Connor. Flannery’s catchy title soon became branded into the psyches of romantics everywhere like some kind of twisted truth.

Flannery, who died of Lupus at the age of 39, was never married, though she had a love affair with a book salesman. I wonder if her good man was there somewhere between the salesman and the lines of the books he tirelessly sold?

A Good Man is Hard to Find.

I’ve spent years pondering what a good man really is. I’ve seen good in every man that has graced my world, whether romantically or platonically, no matter how twisted up they might be inside. Let’s face it, every human being on this planet has good in them. The better question might be, how in tune are they with their good? How do they handle their pain? How do they process their stress? And what type of support system do they have in this world? My therapist self knows that coping tools and support systems are the primary indicators of someone’s mental health.

I was trained not to trust my intuition when it comes to men. Maybe you were too. I’ve had to reparent myself to trust my gut instincts by paying attention to the red and green (as in good) flags along the way. Here are some of the green flags that male friends, colleagues, and past lovers have held. Before you read on, ask yourself, do I also embody these characteristics?

How do I know if he is a good man?

1. He is able to listen instead of jump to advice-giving or try to fix me when I need to vent.

There is a 2 minute Youtube video called, “It’s Not About the Nail.” If you want to understand how the male brain instinctively acts, watch it. Active listening is a learned skill and not an innate ability. A man who can listen is way more sexy than a man with a six-pack. One of my friends recently said her favorite foreplay is having a deep heart to heart conversation with her husband. “When he listens with his heart, I swoon,” she said with a big cheesy smile.

How do you know if your man is listening? He is quiet and attentive, and if you’re sitting in front of each other, he gives you direct eye contact. Then he does something that will make you melt: he reflects back what you’ve said. “So that made you feel frustrated and caused you to shut down because you needed space to process. Did I get that right?”

You got it right. You heard me. You didn’t try to change or fix me. You just re-stated what I expressed to you and that is all I needed. Okay, let’s make out now.

Make-out session aside, it is sexy, enticing, and Oxytocin-producing (aka very bonding) when a man can just listen and be present for a woman.

2. He expresses his feelings easily and effortlessly.

I’m not talking about overexpressing — like carrying a box of tissue around and honking his nose every 20 seconds. I’m talking about a man who has no problem telling you how he feels. I had a male yoga student who recently walked into the studio and said, “I feel nervous, I’ve never done this before. I just wanted to let you know that.” The receptionist and I were floored by his openness. I said to her, “Can every man be like that?” For most men, the courage it takes to say: I’m nervous, I’m scared, I’m feeling alone is buried behind years of man-ups and don’t be such a sissy. Feelings are feelings. They are no different from gender to gender. They start with a thought and then form into bodily sensations. Men have them just as often as women do. A man who expresses his feelings, however, is a rare gem. And if he expresses them, he is one step closer to processing them through. Enter coping tools.

3. He is aware of his coping tools and he uses them.

No codependency here. Whether or not your man has been to therapy, he is aware of his own stress management tools and he uses them like a champ. Perhaps I’m biased, but a man who is in therapy and owns it has his own I’m all about self-growth kind of sexiness.

Coping tools are healthy outlets for stress or stress-preventative techniques. Too much of anything can be unhealthy. This is a man who knows what balance is. If he lifts weights or goes to yoga or runs, he doesn’t burn himself out in the process. He feeds his mind, body, and spirit with just-right doses of healthy activities. He might even inspire you to join he and his furry companion (insert your favorite pet here) in a morning meditation or try out the new sensory deprivation chamber or go to opening day at the local baseball stadium.

If you’re used to playing a caretaking role, you can hang up that hat with this man. He’s got himself covered. No unresolved mother issues here. He knows that he doesn’t need a relationship to fill in his emotional wounds. He wants a relationship that enhances his life. He is drawn to you because you seem to have that self-care stuff going on too!

4. He thinks you’re enough because he thinks he’s enough.

This is a man that is as humble as he is secure. He isn’t cocky or arrogant or narcissistic. Instead, he is authentic. He loves himself enough to take space when he’s stressed and gets that you need to do the same sometimes. You don’t feel a strong need to impress him with a new hairstyle or outfit or hours at the spa. When you dress up for him, it’s for fun, not for approval. You can be your sometimes messy, sometimes ultra-feminine self around him and it doesn’t change the way he treats you. He thinks your vulnerability is as beautiful (if not more) than your ass. He doesn’t want to run when you express your insecurities. In fact, he becomes more attentive and available to you.

5. You can set boundaries and he honors them.

Insecure egos need not apply. When you say, “I need to have some alone time Friday night,” He says, okay. You can also trust that he will express his feelings and not repress them. He might say, “I will miss seeing you for our date night, but I am glad you’re taking care of yourself.” You melt. Why? Because he stated his feeling directly and while also validating your need for space. Win, win.

You feel secure setting boundaries with him because he is open and honest. He won’t hold a grudge against you and do something passive-aggressive like cancel your next date night to go out with the boys. You know how he feels, which makes you feel even closer to him. Your open communication allows you to honor each other’s needs for space so that you savor the time you have together.

When healthy boundaries are part of a relationship, couples are able to show up for each other with their whole selves. A man who accepts no is a unicorn. Don’t let this one go.

There are no perfect men.

But I do believe there are plenty of good men. And they may not be that hard to find. Look closely at the men in your life. How do they exemplify any of these 5 characteristics? And more importantly, look within. How do you resonate and embody these characteristics?

This post was previously published on Publishous and is republished here with permission from the author.

Facebook78Tweet2PinEmailShares80
wpDiscuz
0
0
Would love your thoughts, please comment.x
()
x
| Reply
Share this ArticleLike this article? Email it to a friend!
Email sent!