Think of it like a gift that keeps on giving in many scenarios when viewed through the lenses of the family court apparatuses at play.

Often times hard evidence is dismissed and critical inconsistencies ignored, in many cases, from being put on the record by lawyers and judges in divorce and custody ordeals in an effort to create situations where one parent can be labeled the “custodial” and the other the “non-custodial” even if the reality is such that a shared child spends close to equal time with both parents whereby each provides support — meeting the needs of a son or daughter both emotionally and monetarily.

In such a scenario, and others like it, what possible incentive can call upon players within the industry to award one parent anything more than equal status over the other — especially if a parent is fit, able and willing to be an equal part in the life of the child?

The answer is complex in explanation — yet simple to describe with one word in far too many situations of this nature — money!

Motivations in awarding the “custodial” label are driven towards a certain direction by players with the intention to invest within their own industry by raising the prospects of repeat business down the road — often in the form of continued litigation and appeals stemming from the repercussions directly resulting from positions a parent has been put into by being given the “non-custodial” status in the eyes of the court. Parents are many times put into this position by having been subjected to a host of disingenuous tactics, forced settlements, unethical judgments, denied due process and overt impropriety playing out.

Access to recourse offered within the judiciary is often unobtainable to most — appearing as nothing more than a mirage. Thus the “non-custodial” has now become another mother or father unwillingly offered up as an integral part of the “supply” to the “demand” of a 50-plus billion dollar a year industry. 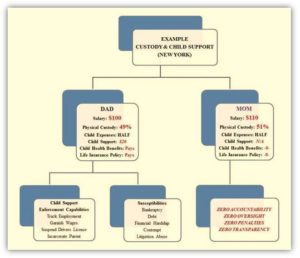 One of the entities that is tasked with targeting the “non-custodial” parent is a state’s Child Support Enforcement Agency — acting on behalf of the state’s interest, but not necessarily for the best interest of children residing there.

At the very basic level when a parent is put into the child support services system and funds are collected at regular intervals, at the behest of the “custodial” parent, a portion of those fees goes to the agency (the state). Hence the more parents put into this system, regardless of whether it is warranted or not, supplies a steady stream of cash to the state by means of the child support enforcement agency.

When folks decide to be parents many accept their inherent responsibility to care and provide for their child without question. In a perfect world, when parents are no longer together, that level of caring and support ideally continues with each contributing to the best of their ability. We are not in a perfect world, however, and sometimes one parent intentionally detaches at these junctures and removes themselves from this responsibility and in doing so has indeed provided reasoning for entities to engage them in pursuing support for a child — often in the form of a states Child Support Enforcement Agency. More times than not though, this type of individual represents the minority in terms of parents contending with this enforcement arm of the court.

Using various tools and tactics in pursuing child support these agencies adversely impact many good parents by pulling the carpet out from under them — usually on the back end of forced litigation and court orders that leave many of these folks financially (and emotionally) harmed to a point where the amount they are ordered to surrender exceeds their ability to pay leaving them at the mercy of a system that is in short supply of that trait.

Examining the “tools” of this enforcement agency in many of the states you find similar items at their disposal that often, when used, compound the problems of parents.

Once a parent becomes vulnerable to the “tools” of child support enforcement the potential is now there for an array of negatively impacting events to ensue — causing a series of domino effects impairing the ability of a parent to provide and be there for the best interest and well-being of a child and themselves.

The number of scenarios that can go into motion are numerous — where problems directly created with one tool can set off a domino effect involving the use of another tool.

The enforcement arm of family law often responds with template messaging offering types of recourse procedures one can take if in a financially, or otherwise, precarious situation. Unfortunately the “recourse” for these problems created from the “tools” of child support enforcement are often intertwined with orders from the court, whereby responding to them involves additional time and money — something many cannot afford due to the financial vacuum running them over vis-à-vis the child support enforcement agency.

Untangling the web of money, and intent behind it, is to engage in the exercise of connect-the-dot throughout several interwoven layers of court players, agencies and independent entities forming a picture of broken system — detailing and identifying the many culpable actors and institutions profiting off conflict and undermining the best interests of children and parents in favor of their own self-serving interests.

Facebook204TweetPin2EmailShares206
wpDiscuz
Share this ArticleLike this article? Email it to a friend!
Email sent!