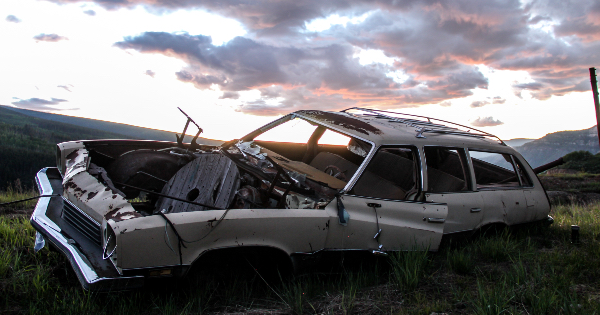 I have been in three major car accidents in my life—two of my own making and a passenger in the third. Having survived all three, I have always felt that I am not going to die in one—I just hope God doesn’t take that as a challenge.

This is the story of the first one. It’s not the most harrowing; I think driving off a mountain would take that honor (but more about that another time). This was just me being a very stupid new driver.

I got my learner’s permit in October of ’75 when I was seventeen-years-old. As all new drivers, I would jump at the chance to drive given any opportunity. So, when my Mom said she needed something from the store I quickly volunteered to go get it.

It was the Friday night after Thanksgiving and I enlisted my sister, Diane, to be my licensed driver. She, in turn, enlisted our two dogs, Tammy, a German Sheppard Collie mix and Rags, my brother’s mentally-challenged Bull Mastiff, to join us. Rags would pee when he sneezed – you had to be very careful during allergy season as to where you could step. With the dogs scrambling in the back seat and my sister and me in the front, I backed out of the driveway, and we were headed off to the store.

Unfortunately for us, we never got there.

As I drove on Throckmorten Lane (our main street) my sister turned around to try and settle down the dogs that were jumping all over the backseat.

We never had a new car when I was growing up. My oldest memory was a black Ford Country Squire with fake wood paneling, red leather seats and a million miles on the odometer. So, when my father came home one night with an almost new Mercury Marquise with thirty-thousand miles and all the newest features, it was like Christmas in July.

With my left hand, I used the power window button to lower the backseat passenger’s window while my sister was doing the same.

Suddenly she shouted, “They’re jumping out the window!”

I looked back as my sister tried to corral the dogs back into the car.

My left hand forgot that he was controlling the direction of the car as he turned. Within seconds, I ran into a parked car. Then again, to make sure everyone was included in this party, the two of us ran into another parked car. The three of us ended up on someone’s front lawn.

In the dazed, confused seconds that followed all I could see was the steering wheel – everything else was black.

There was a roaring sound that filled my head and just as I thought, ‘what is that noise?’ I realized that my right foot was still on the gas pedal. While the engine raced, my damaged car pushed for all it’s worth the two parked cars further up onto that front lawn leaving fingernail-like scratches across the grass.

I took my foot off the gas, and the roar of the engine was replaced with the screams of an older woman in a flannel robe who stood outside my driver’s side door.

“You’re on drugs! I heard you racing up the street doing drugs!”

I wasn’t sure how she heard me doing drugs, but I opened the door and stepped up into her rants. She continued her shouting until the Dad of a girl I went to high school with, who lived across from this disaster, stepped between me and my new admirer.

“She’s an asshole,” he said as he guided me toward the curb.

While that might have well been true, I was the one who just parked three cars on her lawn. I would give her a pass on that for now.

Soon, a couple of police cars and a fire engine showed up. I told my story, and then told it again to anyone who asked me, “So, what happened?”  My sister was led to someone’s house where she could use the phone and call our parents. She dialed and prayed with her whole heart that my brother, not my mother, would answer the phone.

“Hello?” my mother said as she answered the phone.

“Oh, hi, Mom,” Diane said with a huge fake smile on her face that could not be seen by my mother on the other end of the phone line, but it was there just the same. “Since we are out we decided to do some Christmas shopping,” she continued, the pitch of her voice grew steadily higher until soon only the dogs in the car would be able to hear her. “Is Joey (our older brother) there?”

God knows what those people in the kitchen thought as this girl talked about Christmas shopping as three cars were threatening to explode out on the lawn.

When Joey took the phone, my sister told him, through sobs and gasps, what had just happened. My brother had the more difficult task to not show any emotion since my mother was standing next to him in our kitchen.

“Uh huh,” he said, “sure, uh huh, yup.” He never gave us up. But all that would be in vain because as soon as he left with the excuse of Christmas shopping, some neighbor called our house to ask how we were since she heard we were in a terrible car accident.

I guess that’s what we get for lying to our mother.

As my brother came over the crest of the hill on Throckmorten he was greeted with the sight of me seated on the curb, several police cars and a fire truck with their lights flashing, dozens of neighbors milling about, and a thin river of water and gasoline that ran along the gutter under my legs after the firemen hosed down the cars to prevent an explosion.

We took the dogs out of the urine-soaked backseat wreck of our car and put them in my brother’s. Soon I was moving up the front walkway of our house as my mother stood there, framed by the doorway. I expected the worst, but she just threw her arms around me and gave me a hug and then led us all inside.

The next day, we sat with a police officer in our kitchen as he explained that up until that point, this had been the most expensive car accident in our town’s history (and they thought I wouldn’t amount to anything). He also issued a ticket to my sister since she was the licensed driver in the vehicle.

After that, I wasn’t so anxious to drive anymore, and when I did I basically drove so far over to the left to avoid parked cars I was lucky I didn’t get killed by oncoming traffic.

My brother, on the other hand, would drive so close to parked cars I was forever clutching the dashboard and stomping my feet down on imaginary brakes. Eventually, I just started sitting in the back seat, on the driver’s side.

I’m a pretty cautious driver nowadays, even mocked by how slow I drive. But when you challenge God you have to keep your hands on the wheel, eyes on the road, and the dogs out of the backseat of your car.

This was originally published on HuffingtonPost.com and is republished with the author’s permission.

Photo by Alex Person on Unsplash