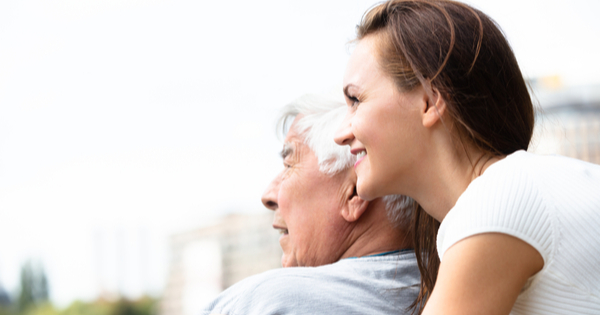 If you wanted advice from your Dad but he knew what he had to say was NOT what you wanted to hear, would he give you the straight goods…or candy-coat it?

My Dad passed away a few years ago but I just finished writing a screenplay entitled, “The Pooh Stone.” In that script, there is a scene in which the characters based on my Dad and I are walking beside a river, having a conversation about spiritual beliefs. The dialogue is a compilation based on several real-life conversations I had with my Dad in the weeks following my husband, John’s, death (and in the years to follow).

I loved writing this scene…I felt like I was right there at the river’s edge with my Dad. This scene takes place a couple of weeks after “Sam’s” death (I am “Alex” and John is “Sam”):

Alex and her dad walk Sasha along river. Alex throws ball for Sasha and she races after it.

So…I gather you don’t believe in the possibility of some sort of divine plan unfolding here?

That would be correct.

Then how do you explain all the weird stuff that’s gone on?

Alex’s Dad stops walking so Alex does, too.

Do you want my honest answer? Or one that makes you feel better?

Sasha returns with ball and drops it at Alex’s feet. Alex picks up ball and throws it. Sasha races off. Alex and her Dad resume walking.

Do you remember when you were little and we used to look up at the stars together?

Yeah. You’d tell me I was wasting my time wishing on shooting stars!

So…you know how when we look up at the stars and see, for example, the Big Dipper?

Well…it’s not as if the stars were designed to be in the shape of a big soup ladle. That’s just how the configuration of stars ended up, right?

But then someone came along…

Alex’s Dad points to sky and with his index finger, makes the shape of the Big Dipper.

And connected those dots into a meaningful pattern and called it “The Big Dipper.”

Alex nods slowly, listening carefully. Sasha comes up and drops the ball at her feet again. Alex shakes her head.

Sasha picks up ball and walks alongside Alex and her Dad.

What I’m saying is…the human brain seeks patterns, Alex. People have been searching for meaning in their surroundings for thousands of years…it’s how we make sense of our world.

I wish I went with the answer that made me feel better.

Alex and her Dad stop and sit at bench overlooking river. Sasha lies down, ball in mouth.

I’m sorry…but I’m not going to lie to you about my beliefs.

Alex’s Dad sweeps his arm across the river.

That all this is just randomly unfolding…with no larger entity at the helm, guiding the ship.

So we make up stories to explain how we got here, WHY we’re here…that we’re still being cared for while we’re here…and where we go next.

Wow…you sure know how to rain on a widow’s parade!

Obviously, my Dad was very honest about his beliefs. Even though I was in a highly vulnerable state, he still felt the need to be candid. He didn’t tell me what I wanted to hear. In hindsight, I’m awfully glad he didn’t.

I’m not saying my Dad was correct in his beliefs (he may have been…but who knows?). But I am thankful he had the courage to provide me with a valuable perspective that helped pave the way for a more…balanced spiritual journey through the grieving process.