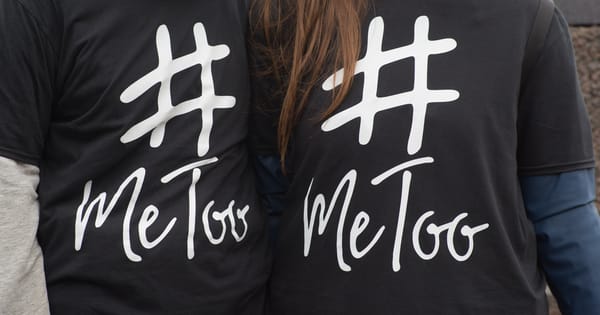 A year or so ago, I wrote about hashtags. I wish I could say that a lot has changed in that year, but I fear that there is much more to do. My focus then and now is on what has happened since so many of us proclaimed #MeToo and #TimesUp.

Like many women and girls, I proclaimed, Me Too. And, like most, mine was not a one-time experience but rather a lifetime of inappropriate comments, catcalls, and unwanted sexual contact. As I’ve written before, I’m glad the Hollywood and USA Gymnastics scandals had us talking about powerful men who abuse that power. But it isn’t just men in power who commit these same acts of sexual harassment, abuse, and assault. Men harass women and girls in the streets, at the stores, in schools. Everywhere. Simply acknowledging it helped elicit conversation and some solidarity, but it wasn’t nearly enough.

I am 45 years old. Not long ago, I experienced unwanted sexual conduct from someone half my age. The only power he has over me is that he’s a man who feels he’s entitled to say and do as he pleases to women. I have been catcalled by boys recently out of high school on the campus where I teach nearly on a daily basis—a university with a commitment to social justice. A random guy at the gym thinks it’s OK to make a lewd comment about my weight, while another one at the market felt it was complimentary to mutter about my body to the poor female cashier, as if she wanted to hear his verbal diarrhea. As I drove to present a version of this piece at the Miami Women’s March second annual event last year, a man pulled up next to me so he could make a vulgar sexual gesture.

So, yeah, Me Too. Speaking up matters. Shedding light on the scope of these problems to those who had inexplicably missed it, matters. Solidarity matters. And no, I do not believe this is fake feminism. But now what?

Celebrities like Emma Watson, Reese Witherspoon, and Shonda Rhimes launched #TimesUp as perhaps a next step. With their attention, which wonderfully dominated the Golden Globes, they’ve also started a legal defense fund to help individuals come forward without fear of legal, career, or financial retaliation. This is great: they’ve pledged to help create a cultural shift that will end sexual harassment.

That’s where things get a bit more vague. What does that look like? And how does it happen? Stories and accountability are elements of it, but they alone do not shift the culture.

Perhaps some other hashtag ideas can be helpful here. I have to admit, I’m not that big of a hashtagger, so forgive me if some of these may already be in circulation. But, how about #Iwilldisruptit? Someone saw or heard all of the instances I mentioned earlier, and in most cases of harassment, abuse and assault, that is true. What if in addition to being committed to speak up as persons who have been victimized, we also committed to speak up when we see or hear troublesome comments or behavior? Some of us do this, others need to start doing it.

Or how about #teachkidsgenderequality? If we want to change our culture, we need to socialize both boys and girls differently. All kids need to know that no one is entitled to control your decisions and your bodies but you. I am guilty of being too nice, of too easily dismissing or forgiving. Many of us are. And yet I’m pissed off that I still have to live in this rape culture and that my daughter does too. As Barbara Kingsolver so importantly wrote, “Feminine instincts for sweetness and apology have no skin in this game.” As this last year has affirmed, when women channel their anger about gender inequality, amazing things happen.

I’m sure we can think of many more ideas—and they are that, not just hashtags—that will help transform our culture into one in which women don’t face these daily microaggressions. The 2018 midterm elections that brought a record number of women to public office, including lesbian women, women of many faiths, and women of color, can potentially be a big step. But it remains on all women—and the progressive men who support us—to stay vigilant, to disrupt male entitlement when we can, and to make things better for both our daughters and our sons.

I vow to disrupt the kind of puerile and disgusting male behavior that you describe as having been directed towards you, whenever and wherever I observe or encounter it.
It makes me feel ashamed to be male.
This crap has to stop now!

Facebook14Tweet7Pin2EmailShares23
wpDiscuz
1
0
Would love your thoughts, please comment.x
()
x
| Reply
Share this ArticleLike this article? Email it to a friend!
Email sent!