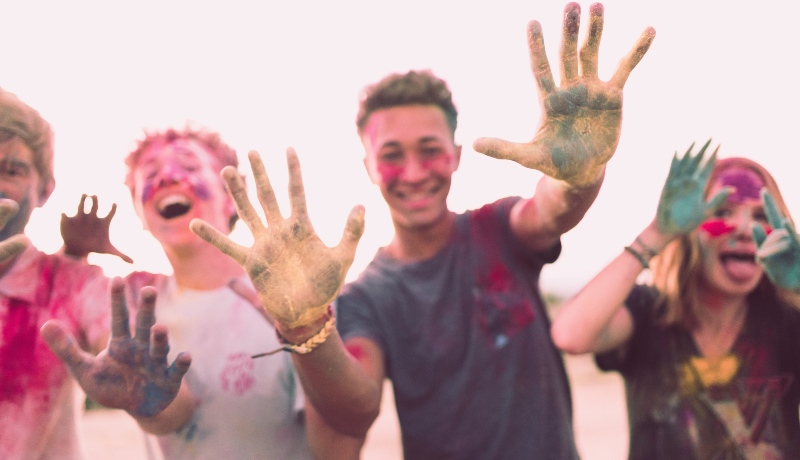 As a parent of soon-to-be teenagers, I confess that I am anxious about navigating that period of time, looming large on the horizon, where my children transition into adulthood.

So when the opportunity came up to interview Michael Knight, I jumped at the chance. You see, Michael Knight is an adolescentologist — a person who studies adolescence.

If anyone has some insights that might help me as a parent, this is the man. While he is humble about his achievements and is quick to point out that he is still learning, Michael has walked down the road of experience enough to be considered a genuine expert in the field.

He is the founder of the Australian arm of Peer Power — an organization that specializes in that challenging period between childhood and adulthood. Over the last three decades, Michael has engaged with hundreds of thousands of young people, visiting schools and presenting seminars to teenagers on leadership and life skills. He also provides professional development workshops to teachers and parents alike.

As a parent, I couldn’t wait to pick his brains about adolescence. Here are some of the key insights from our conversation.

A Brief History of Adolescence

I already knew that the period we now label “adolescence” has only been acknowledged as a distinct life stage from a psychological perspective in fairly recent times. When I put this to Michael, he agreed, and provided some really interesting background information on the history of adolescence.

The earliest use of the term appears around the 15th Century and has its roots in the Latin word, “adolescere” meaning, “to come to maturity”. However, the term wasn’t popularized until 1904 when the first president of the American Psychological Association, G. Stanley Hall, was credited with coining the term to describe the developmental phase between childhood and adulthood.

Apparently, G. Stanley Hall was not too fond of teenagers. He believed the chief goal of adolescence was the overcoming of one’s beast-like impulses and to “Burn out the vestiges of evil in their nature.” I’m sure every parent and school teacher must have felt the same way at some point!

Despite the acceptance of adolescence as a distinct life stage, it wasn’t widely acknowledged until the mid-twentieth century. In my home country, Australia, it wasn’t until 1942 that the government lifted the legal marriage age from 12 to 16 for females and 14 to 18 for males. Prior to this, the assumption was that a person went straight from being a child to an adult with the trigger to this transition being the onset of puberty. The changing of the legal marriage age was a recognition by authorities of the distinct stage between childhood and adulthood.

What Makes Adolescence Different to Other Stages?

Michael describes the adolescent journey as similar to the metamorphosis of the caterpillar to butterfly. “Adolescence is the cocoon stage where the transformation is taking place.” I think about how much time I spent hidden away in my dark bedroom when I was a teenager and I can appreciate the analogy!

Some of the changes that occur during the cocoon stage are obvious — like the physical ones. Michael points out that teenagers are prone to be moody because their hormones have gone into overdrive in order to facilitate the necessary physical changes between child and adult.

Some of the other changes are less obvious. Michael says that it is common for teenagers to have conflict with their parents during their teenage years. There is a pushing of the boundaries and a questioning of the parent’s authority. This is a normal process as the child begins to strive for independence and autonomy. Essentially, they are trying to break free of the apron strings.

Another distinctive of the adolescent stage is the tendency of teenagers to engage in high-risk behaviors. These risks could be negative (like experimentation with elicit drugs) or positive (such as auditioning for the lead part in a school musical). Risk taking is an important part of the adolescent’s journey in finding their identity and becoming an independent young adult. It is important to remember though that the areas of the brain that handle impulse control and planning don’t completely mature until about age 25. This means teenagers are more likely than adults to make quick and risky decisions. Therefore, teenagers still need the advice and guidance of their parents and other adults.

And while the guidance of parents is crucial, it’s important to remember that adolescence is a “peerachy” where teenagers are ruled by the opinions of their peers more than anything else. During adolescence there are changes in the brain that make teenagers more focused on the reward they feel when they are admired by their friends, and the positive reinforcement they get by being included. This is why adolescents feel real distress if they don’t have friends or are socially rejected.

Advice for Parents of Adolescence

“The goal of parenting,” explains Michael, “is to produce an autonomous, independent adult who contributes to society.”

Michael is clearly passionate about this topic. He believes that the phenomenon of the elongation of the adolescent stage that we observing in society today is often related to parenting style.

The goal of parenting is to produce an autonomous, independent adult who contributes to society.

Michael’s top piece of advice for parents of adolescents is to let their kids experience struggle, challenge and pain. Too many parents rescue their children from all their difficulties. This sets them up to fail in the long run because pain is one of life’s greatest teachers. Be there for your kids, by all means, but don’t solve all their problems for them.

The second piece of advice that Michael offers parents is to keep the end goal in mind. “Realize one thing,” Says Michael, “The job of parenting is to be a parent. Many parents make the mistake of trying to be their child’s friend.” A parent’s job is to set boundaries. An adolescent’s job is to push those boundaries. However, if there is no clear expectations or challenge in the parent-child relationship, then there is no discipline and ultimately no growth.

Another piece of advice that Michael has for parents of adolescents is to not fall into the trap of doing everything for your child. In fact, do not do anything for a teenager that they are capable of doing for themselves. Adolescents should be learning to do their own laundry and ironing. They should be making their own school lunch and cleaning their own room. Parents who do this for their teenage children are setting them up for failure in the long run. As adolescents strive for independence and autonomy, parents should be equipping them for adult life by making them take on adult responsibilities.

The final piece of advice that Michael offers to parents is this: Laugh a lot. “Parents set the tone in the household,” Says Michael. “In all of your communications with your child, you are the one who sets the tone.” If you are anxious, the household will be anxious. If you use aggressive and caustic put downs then expect the same from your children towards you and others. If you are positive and calm, then that will be the prevailing tone in your house. Therefore, laugh a lot — especially at yourself.

I asked Michael, “Why do you work with this age group? I mean, people aren’t climbing over the top of one another to get into this field.”

“When I work with adults,” He says, “The things I say don’t make that much difference. Almost without exception, the adult brain, along with its preconceived ideas and biases, is fixed in place and hard to change. However, the teenager is still open. Their mind is still pliable. When you provide them with the facts, they are much more likely to consider what you are saying. When you work with teenagers, you can really make a difference.”

The same is true for all of us who work with adolescents — whether as parents, relatives, teachers or mentors. There is a wide-open window of opportunity to make a positive, life-long difference in the life of another human being. Despite the fact that teenagers can be difficult, our input is always worth the investment.