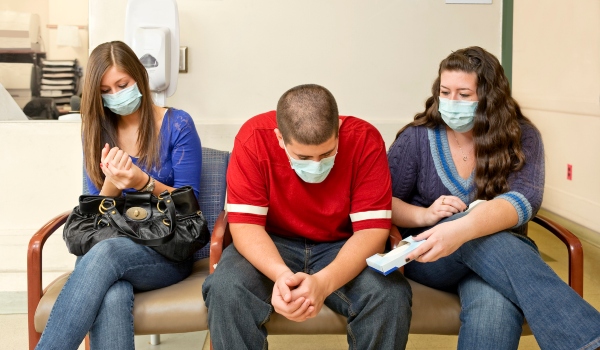 It is estimated that around 700,000 deaths occur annually as a result of infections by resistant bacteria – known as antimicrobial resistance (AMR). Without effective approaches to combat AMR, it is projected that by the year 2050, the rate could reach as high as 10 million deaths per year.

From an economic standpoint, AMR is also devastating. The cost of lost global production between 2014 and 2050 is predicted to be near $100 trillion USD.

Why prescription drugs are often no longer effective

Antimicrobial agents are any drugs designed to kill or inhibit the growth of microorganisms of different classes. This includes antibacterial, antiviral, antifungal and antiparasitic substances.

Generally, antimicrobial resistance to prescription drugs is a process that takes place naturally over time as a result of genetic adaptation of organisms to drugs that are designed to kill them. However, the process is accelerated when drugs are misused or overused in humans and animals.

Unfortunately, drug resistance spreads rapidly since resistant genes can easily transfer from one organism to another non-resistant one. Transmission can be among humans, animals and between species. Many once successful drugs are now ineffective in treating microbial infections and the total number of new drugs being developed continues to drop, as demonstrated by data collected since the early 1980s.

Antimicrobial misuse by patients is far too common due to a lack of understanding of the intended purposes, poor patient compliance to the duration of treatment and inappropriate prescription by health care professionals.

Antimicrobials are also used in livestock animals, poultry and fish for various purposes such as treatment or prevention of infections and to promote and accelerate growth.

What this means is that the emergence of AMR organisms can occur simultaneously in humans and animals, contributing to their overabundance in the environment and increasing the risk of a public health threat.

The World Health Organization (WHO) has urged countries around the world to establish practical steps in the fight against AMR. In May 2015, the World Health Assembly endorsed a global action plan with five major objectives aimed to reduce the AMR burden.

What is ‘Antimicrobial Stewardship’ and how has Canada responded?

Antimicrobial Stewardship was first recognized as an urgent public policy priority at a Canadian Consensus Conference entitled “Controlling Antimicrobial Resistance: An Integrated Action Plan for Canadians” in 1997. Since then, AMR has gradually received more attention by the Canadian government as a major public health risk.

In 2011, the Public Health Agency of Canada (PHAC) recognized AMR as one of the most significant public health risks for Canadians. In 2013, Accreditation Canada established “Required Organization Practices” (ROP) for an antimicrobial stewardship program in acute care facilities to promote effective use of antimicrobials. Finally in 2015, the government of Canada released the Federal Action Plan on Antimicrobial Resistance and Use in which stewardship was highlighted as one of the four pillars to combat AMR along with, infection prevention and control, surveillance and innovation. Additionally, the federal budget, through the Canadian Institutes of Health Research (CIHR), contributes $2 million annually to research that enhances understanding and control of AMR.

In addition to emphasizing the importance of AMS in the human context, this document highlights the significance of AMS in an integrated “One Health” approach to be adopted by federal, provincial and territorial (F/P/T) governments, where the interconnectedness of animal health, agriculture and ecosystem is acknowledged.

One of the major components of stewardship is to minimize dependence on antimicrobial agents through prevention efforts. Much of this relies on proper public education about ways to minimize and eliminate the spread of AMR organisms — for example, by regular hand-washing and keeping surfaces clean. The Canadian government launched an annual AMR awareness campaign in November 2014 to disseminate professional practice guidelines and messages to the public and among health care providers in acute and long-term care settings.

Education, development of guidelines for best practices and knowledge sharing among health care professionals is another aspect of PHAC’s stewardship strategy. An example of this is the updated guidelines for the treatment of gonorrhea infection to prevent the emergence of untreatable resistant strains. In 2012, WHO announced that treatment options for gonorrhea around the world were becoming exceptionally limited, with resistant strains detected in Australia, France, Japan, Norway, Sweden and the United Kingdom.

The threat in Canada was the doubling of infection rates since the year 1997, with increased risk among young people in northern territories and the prairie provinces and the emergence of resistant strains countrywide. PHAC’s new guidelines recommended combination therapy using multiple antibiotics. This strategy helps prevent resistance towards any one drug.

Judicious use of antimicrobials in food animal production is another aspect of antimicrobial stewardship. The Canadian Food Inspection Agency (CFIA) and Health Canada develop, monitor and regulate frameworks for veterinary medications and medicated feeds. Collaboration with provincial partners and stakeholders is considered key for strengthening veterinary oversight and regulation of antimicrobials used in food-producing animals.

Food safety programs and best practices that support appropriate use of drugs including antimicrobials in farm animals are promoted by Agriculture and Agri-Food Canada. In the federal action plan, the government of Canada describes its role in importing, licensing and sale of veterinary drugs and medicated feeds that contribute to animal health, which can ultimately affect AMR patterns in both animal and human populations.

Higher rates of antimicrobial use and the associated increased risk of AMR are influenced by various social determinants of health such as income, employment status, socioeconomic levels, history of illicit drug use and housing. In Canada, some First Nations communities are at a greater risk of antimicrobial use and the emergence and spread of AMR.

It has been recommended that we need to develop stewardship programs that could address the needs of specific populations based on targeted prevention.

Stewardship requires commitment from all public health practitioners such as nurses, doctors, pharmacists, dentists and health care administrators. Among these, prescribers of antimicrobials play a critical role as they determine the dosage and course of treatment. Inappropriate prescription may be higher in one group of health care providers than others and therefore, stewardship programs may be designed and implemented with different strategies for different groups.

A well-designed stewardship program will promote and encourage prescribers to minimize treatment to necessary and well diagnosed cases, while also withstanding pressure from patients and their families.

Multi-level collaboration and information exchange can help to create an environment of support among users of antimicrobials and heighten awareness and vigilance among prescribers that can gradually reduce the use of AMR and eliminate the risk of an emergence of new resistant strains.

Examples of Stewardship in Canada

In Canada, there are long standing stewardship programs that have been effective in reducing unnecessary prescription and use of antibiotics. Do Bugs Need Drugs? (DBND), a community-based education program first established in Grand Prairie, Alberta in 1996, provides such an example. The program was created with the objective of increasing awareness of antimicrobial use and AMR in Alberta.

Over the years, Do Bugs Need Drugs has been providing educational resources for doctors, nurses and pharmacists working in community hospitals or long-term care settings while also taking initiative to inform and educate the general public about the risk of AMR through the use of printed material, continuing education, awareness campaign and multimedia approaches.

Two of the major achievements of this program include a reduction in the rate of prescription of antibiotics at the community level for the treatment of respiratory tract infections among children in British Columbia and reduction in antibiotic prescription in long term-care facilities in Alberta through the education of staff and the implementation of audit and feedback strategies.

Antimicrobials are frequently prescribed in hospitals and intensive care units and stewardship in these settings are also necessary to improving clinical outcomes and patient safety by reducing AMR. In Canada, there are also examples of hospital-based stewardship programs. Mount Sinai Hospital’s stewardship program within the University Hospital Network (MSH-UHN) in Toronto aims to reduce the use of broad-spectrum antimicrobials.

Program evaluations at Mount Sinai over the years have shown a reduction in antimicrobial drug costs and use of specific antimicrobial drugs. The major components of the stewardship programs there included distribution of educational programs to hospital health professionals, implementation of prospective audit and feedback among prescribers and assignment of physicians or pharmacists as leaders of these programs.

Antimicrobials are powerful agents used in the treatment of different types of infections. In order for them to remain effective and to reduce the prevalence of AMR, a collaborative effort between all government levels, the public health sector, and the public is required. Scale up of leading practices of antimicrobial stewardship in Canada is needed to achieve this goal. With a few good examples of leading practices, Canada has the necessary resources to reduce the burden of AMR.