The day had gone over hill, but that still, blue light remained, cut with a gray edge, catching corners rice paddies lean out of. In the serious blue brilliance of battle, they’d become comrades becoming friends, just Walko and Williamson and Sheehan sitting in the night drinking beer cooled by Imjin River waters in August of ‘51 in Korea. Three men drably clad, but clad in the rags of war.

Stars hung pensive neon. Mountain-cool silences were being earned, hungers absolved, a ponderous god talked to. Above silences, the ponderous god’s weighty as clouds, elusive as soot on wind, yields promise. They used church keys to tap cans, lapped up silence rich as missing salt, fused their backbones to good earth in a ritual old as labor itself, these men clad in the rags of war.

Such an August night gives itself away, tells tales, slays the rose in reeling carnage, murders sleep, sucks moisture out of Mother Earth, fires hardpan, sometimes does not die itself just before dawn, makes strangers in one’s selves, those who wear the rags of war.

They had been strangers beside each other, caught in the crush of tracered night and starred flanks, accidents of men drinking beer cooled in the bloody waters where brothers roam forever, warriors come to that place by fantastic voyages, carried by generations of the persecuted or the adventurous, carried in sperm body, dropped in the spawning, fruiting womb of America, and born to wear the rags of war.

Walko, reincarnate of the Central European, come of land lovers and those who scatter grain seed, bones like logs, wrists strong as axle trees, fair and blue-eyed, prankster, ventriloquist who talked off mountainside, rumormonger for fun, heart of the hunter, hide of the herd, apt killer, born to wear the rags of war.

Williamson, faceless in the night, black set on black, only teeth like high piano keys, eyes that captured stars, fine nose got from Rome through rape or slave bed unknown generations back, was cornerback tough, graceful as ballet dancer (Walko’s opposite), hands that touched his rifle the way a woman’s touched, or a doll, or one’s fitful child caught in fever clutch, came sperm-tossed across the cold Atlantic, some elder Virginia-bound bound in chains, the Congo Kid come home, the Congo Kid, alas, alas, born to wear the rags of war.

Sheehan, reluctant at trigger-pull, dreamer, told deep lies with dramatic ease, entertainer who wore shining inward a sum of ghosts forever from the cairns had fled; heard myths and the promises in earth and words of songs he knew he never knew, carried scars vaguely known as his own, shared his self with saint and sinner, proved pregnable to body force, but born to wear the rags of war

Walko: We lost the farm. Someone stole it. My father loved the fields, sweating. He watched grass grow by starlight, the moon slice at new leaves. The mill’s where he went for work, in the crucible, drawing on the green vapor, right in the heat of it, the miserable heat. My mother said he started dying the first day.

It wasn’t the heat or green vapor did it, just going off to the mill, grassless, tight in. The system took him. He wanted to help. It took him, killed him a little each day, just smothered him. I kill easy. Memory does it. I was born for this, to wear these rags. The system gives, then takes away. I’ll never go piecemeal like my father. These rags are my last home.

Williamson: Know why I’m here? I’m from North Ca’lina, sixteen and big and wear size fifteen shoes and my town drafted me ‘stead of a white boy. Chaplain says he git me home. Shit! Be dead before then. Used to hunt home, had to eat what was fun runnin’ down. Brother shot my sister and a white boy in the woods. Caught them skinnin’ it up against a tree, run home and kissed Momma goodbye, give me his gun. Ten years, no word. Momma cries about both ’em all night. Can’t remember my brother’s face. Even my sister’s. Can feel his gun, though, right here in my hands, long and smooth and all honey touch. Squirrel’s left eye never too far away for that good old gun. Them white men back home know how good I am, and send me here, put these rags on me. Two wrongs! Send me too young and don’t send my gun with me. I’m goin’ to fix it all up, gettin’ home too. They don’t think I’m coming back, them white men. They be nervous when I get back, me and that good old gun my brother give me, and my rags of war.

Sheehan: Stories are my food. I live and lust on them. Spirits abound in the family, indelible eidolons; the O’Siodhachain and the O’Sheehaughn carved a myth. I wear their scars in my soul, know the music that ran over them in lifetimes, songs’ words, and strangers that are not strangers: Muse Devon abides with me, moves in the blood and bag of my heart, whispers tonight: Corimin is in my root cell, oh bright beauty of all that has come upon me, chariot of cheer, carriage of Cork where the graves are, where my visit found the root of the root cell—Johnny Igoe at ten running ahead of the famine that took brothers and sisters, lay father down; sick in the hold of ghostly ship I have seen from high rock on Cork’s coast, in the hold heard the myths and music he would spell all his life, remembering hunger and being alone and brothers and sisters and father gone and mother praying for him as he knelt beside her bed that hard morning when Ireland went away to the stern. I know that terror of hers last touching his face. Pendalcon’s grace comes on us all at the end. Johnny Igoe came alone at ten and made his way across Columbia, got my mother who got me and told me when I was twelve that one day Columbia would need my hand and I must give.  And tonight, I say, “Columbia, I am here with my hands and with my rags of war.”

So, What’s in My Wallet?

In the photo above are Tom Sheehan (Saugus, MA), Frank Butcher (Elston, Iowa), Tom Durocko (Springfield, Illinois) and Chuck Rumfola, Avon, NY (all RIP), taking a musical breather in a reserve area after Iron Triangle business. All three of them gone, Butcher and Durocko in Korean battles, and Chuck Rumfola the most recent of comrades’ deaths as he visited my home in 2017 with his daughter Carol and son-in-law Peter Konstraba. And managed to sign the Korean 1000 Won banknote, carried in my wallet all these years, after the day my whole squad signed it in 1951 when Chuck Rumfola was off on a special assignment of jacking up the rear end of an Army six-by truck, stripping two wheel rims of their tires and tubes, sending one rim to the top of the mountain where he connected the two rims with a cables and sent supplies up the steep face of the mountain that would have taken many Korean laborers many hours to accomplish. All he had to do was run the engine of the truck to spin the wheels and cut multiple days of delivering arms and supplies up the steep side of the mountain. Chuck visited my house in June, 2017, added his autograph to the bank note shown here, darkest ink signature a sign of the times. (Note: Five days after he signed the bank note, in the darkest ink, he passed away at home at 91 in Avon, NY, after two wars.) For subject material for a writer, Chuck Rumfola was a rich well and told some of the grandest stories I ever wrote thereafter. (Like how he told a neighbor he had to plant corn seeds pointing up, and caught him doing just that in the dark, and thereafter snuck out at night on his own to fertilize the neighbor’s glorious crop— or, on and on and on.

I’ve never threatened to spend the 1000 Won Banknote, but if I did, and we all were once again in the same squad tent, I might rig a party, call up a big band, or a single tooter to play some song suitable to all of us, or play a simple but special toot on his tooter, there being such toots available. 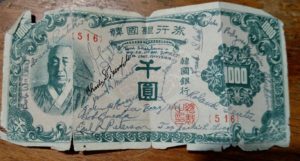 Photos Courtesy of the Author

Sheehan, in his 92nd year, has recently published his 43rd and 44th books,
"Small Victories for the Soul," and "The Grand Royal Stand-off and Other Stories."