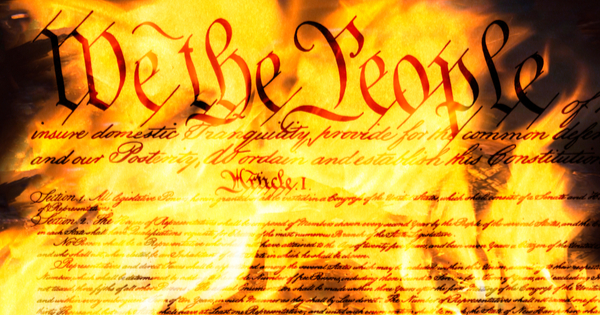 Every so often my friend Devin and I get into a heated discussion about government. He is much more optimistic than me, believes in the good that everyone possesses, and that as a whole, the country will right itself after these infectious and abhorrent times through voting, bi-partisan lawmaking, and community support.

I, on the other hand, usually resort to theoretical violence. I lecture about completely dismantling the country, turning it into a tire fire ruled by geographical juntas, the dissolution of all government, rule, order, and law. I want complete anarchy, a total destruction of everything we’ve ever known just to prove that this was the way our capitalistic greed was taking us.

We tried not to have this discussion because we both knew we would never agree. I was determined to destroy while he was determined to mend. I want the detonation of democracy while he seeks the application of it. It’s always an agree to disagree moment, and since we are such great friends and agree on so many other things, this wasn’t a make or break moment for us. We just chose not to go down this path in conversation, something that is both responsible and wise. But one day we did. One day we just went ahead and got right into it.

I learned something that day. Something of myself but more about what I actually was trying to say. I’m a hothead, but instead of going off the handle and talking about arming myself with an artillery of military-grade weapons to start my anarchistic militia, I did something we all struggle to do; listen.

I just closed my mouth and listened to Devin, a childhood friend who obviously wants the best for me and is a smart, responsible, contributing member of society. He stayed calm too, mostly because he is a level headed guy, but also because I wasn’t constantly interrupting with counterpoints or degrading comments.

After our phone conversation, I hung up and spent some time digesting what we had talked about. It suddenly dawned on me what I wanted to see in America and it isn’t complete chaos and destruction, but rather a disruptive political crisis from activists that will bring about substantial change instead of arguments that stall in the House and Senate. Our system of checks and balances is designed to keep radical majorities from quick impetuous change.

The Senate is there to stop the house from passing something that could be completely one-sided. But it’s inherently “unfair” to have a state like Wyoming with over seven hundred times the voting power of California. This is the opposite of one vote one person.

But this system has made us the most stable republic in the world while also making it the least responsive. What makes the system respond is civil unrest and it’s something we have only seen a few times, the last of which was the late 1950’s through 1965 which led to African Americans receiving the same rights as the rest of society. It took years of substantial protest and activism with a unified agenda to overcome something that was inherently unfair.

Eventually, both sides of the aisle, the House and the Senate agreed. Checks and balances are built into our constitution to keep people like me from burning down the house. But when individuals unite to force change at the behest of the supermajority, a chorus of American voices is too loud for any one branch of government to ignore completely.

My dystopian vision of tearing our country apart was misguided if not misinformed. We have the power to change as a society without dismantling what we know. But it’s going to take some sincere unifying power and a single issue that we would like changed. We need to unite over one issue, an issue that gives corporations the most power over us, an issue that hampers individual household economics the most, and something that we see as a right in this country and not a privilege; universal healthcare, something that would impact every American.

The issue will be uniting and then overcoming the natural roadblocks that are built into our constitution. With the house and senate fighting, the house arguing with the president, the president arguing with everybody, and no one agreeing on what it is we want and need in America, no one is listening. Everyone is shouting their disgruntled point, hot with anger, armed with confusion and insults, exploding with distaste for the “other side”. We are what our government has become and getting upset at what we see is distracting us from the mirror in our own homes.

Stop shouting and start listening. It turns out we’re all saying the same thing.