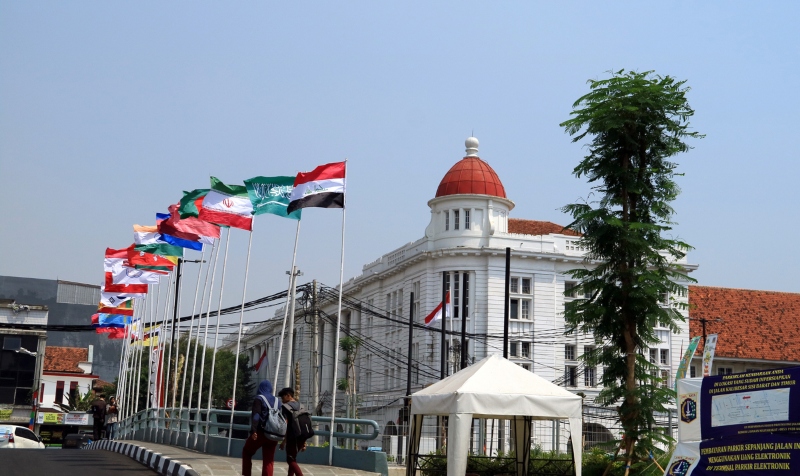 The 18th Asian Games opens on Saturday in Jakarta, Indonesia. This is the second time in 56 years Indonesia has hosted the largest sports event in Asia. This time, Indonesia is holding the games in two cities – Jakarta and Palembang, South Sumatra.

The success of the 2018 Winter Olympics in South Korea in promoting peace on the Korean Peninsula has raised debates on the role of sport events in global peacekeeping. In bringing together 45 countries, some of which are in the middle of protracted conflicts, can the Asian Games do the same?

Asian Games as a battleground?

As an international sports event, the Asian Games has every potential as an alternative means to promote peace. However, this can be challenging, both for the host and the participants.

Of the 45 countries participating in the Asian Games, 17 conflicts are still occurring within the borders of some of these countries. Three of the conflicts are between states. The rest are civil wars.

Among these conflicts are the long-standing war on the Korean Peninsula, the India-Pakistan dispute over Kashmir and the Yemeni crisis involving Saudi Arabia and Yemen.

We should not forget the ongoing conflict between China and Taiwan, which refuse to recognise each other’s sovereignty. The China-Taiwan conflict may not be an open conflict but it remains a noticeable scar on Asian politics.

What can Indonesia offer?

To ensure that the Asian Games can promote global peace, Indonesia needs to maintain its positive image as a host nation. A successful bid to host a mega sport event is an initial confirmation of Indonesia’s diplomatic stature. To keep up such a trustworthy image, it’s crucial to provide quality amenities and promote good sportsmanship.

The country can also play an intermediary role by providing a comfortable environment for the conflicting states to connect more closely. Indonesian President Joko “Jokowi” Widodo has practised this approach by inviting both the North Korean and South Korean leaders to participate in the Asian Games.

The joint teams are a follow-up to the decision by both countries to compete in the Winter Olympics last February as one group. This joint team has proven how sports have the potential to become a source of soft power when coercion simply does not work.

Similar events like the Asian Games are also able to make conflicting countries engage on a platform that conventional diplomacy could not provide.

Competitive sports have long been part of human civilisation. History suggests the first sports event dated back to 776 BC, when Greek city-states held the first Olympic Games.

As history unfolds, with modern nation-states replacing city-states, attempts to emulate the Olympic Games were made in different countries.

However, it was only in 1896 when we started having the first modern Olympic Games as the global multi-sport event. Since then, many smaller international sports events have been proliferating, usually spearheaded by regional federations. One of these is the Asian Games. The event was initiated in 1951 and governed by the Olympic Council of Asia.

Since sport has become more globalised, it has been slowly evolving as a new agenda in international politics. As the performances of athletes reflect the state’s image, world leaders have been prioritising the development of sports in their countries.

The same goes for the citizens. They tirelessly support the athletes as they consider them to be national heroes who make them proud.

In international politics, war and peace remain the most salient topics. Even though the number of armed conflicts has been in decline since the second world war, some parts of the world are still plagued by war.

When traditional means of diplomacy are unable to overcome this obstacle, sport is widely expected to fill the gap. The universal nature of the sport, which knows no language barriers, has made politicians look to it as a new diplomatic means.

Researchers Havard Mokleiv Nygard and Scott Gates at the Peace Research Institute, Oslo, argue that sport can be a peace-building tool in four ways:

Response to the sceptic

Some might be sceptical about the role of sport events in promoting peace. But this scepticism is only justified if we treat these events as a magic solution that breaks every barrier to peace-building.

In avoiding such a slippery slope, we should acknowledge that sport events like the Asian Games are competitive events.

There is a thin line between providing respectful meetings and creating an exhibition of animosity and jingoism.

To make the most out of such opportunities, leaders should be committed to respecting sport’s universal message to bring people together regardless of their backgrounds.

Certainly, the Asian Games is not a direct solution to peace.

Nevertheless, when everybody is equal in the face of sport, even the most polarised sides can learn to respect and trust each other. This is an advantage that sports events can offer compared to any traditional means of diplomacy.

After all, it is up to the participating countries to ensure they can use the Asian Games as the perfect moment to alleviate the tension they have with their enemies. The opportunity is there for them to take.