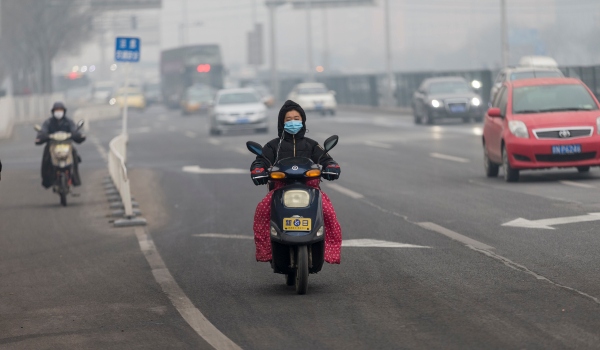 LONDON, 22 October, 2018 − Air quality in China has substantially improved over the last three years with a 20% reduction in small particulates, the most dangerous form of pollution that has been causing more than one million deaths a year.

The figures shows that Chinese government policies designed to improve air quality are working, and that life expectancy in the country will increase as a result.

The news is also good for climate change because the same policies mean less fossil fuel is being burned and fewer greenhouse gases released.

The study, published in Environmental Research Letters by the University of Leeds in England, is based on air quality readings taken at 1,600 locations in China from 2015 to 2017.

Hourly assessments were made of concentrations of nitrogen dioxide (NO2), sulphur dioxide (SO2), ozone (O3), and fine particles measuring less than 2.5 thousandths of a millimetre (µm), known as PM2.5s.

Concentrations of PM 2.5s − the most dangerous pollutant − fell by 7.2% a year over the three-year period, and sulphur dioxide by 10.3%.

Low-level ozone, which is produced by sunlight acting on pollution, rose by 5% per year. This increase, which would have caused some extra irritation of the lungs, may have been the result of more sunlight reaching the ground.

Study co-author Professor Dominick Spracklen, from the School of Earth and Environment at Leeds, says: “Rapid economic growth and large increases in emissions have led to serious air quality issues across China.

“One of the most dangerous components of air pollution is fine particulate matter that measures less than the width of a human hair.

“These particles can penetrate deeply into the lungs, causing serious health complications. Exposure to these particles is estimated to cause more than 1 million deaths across China each year.

“In response, the Chinese government introduced policies to reduce emissions and set ambitious targets to limit the amount of particulates in the atmosphere. This is the first detailed assessment as to whether these policies are having an impact.”

Ben Silver, study lead author and post-graduate researcher at Leeds, says: “Our work shows rapid and extensive changes in air pollution right across China. In particular, it is encouraging to see that levels of fine particulate matter have fallen rapidly in the last few years.

“While more research is needed to fully assess what is driving the trends we’ve uncovered here, particularly what is causing the widespread increase in ozone concentrations, we can see that China’s emissions control policies seem to be on the right track.”

Another study, published in Environment International, says that replacing fossil fuels with renewables in China and India will add years to people’s lives.

Harvard School of Engineering and Applied Sciences looked at the effect of air pollution on the life expectancy of 2.7 billion people who live in the two countries – more than a third of the world’s population.

Air pollution is one of the largest contributors to death in both countries. China is rated as the fourth most polluted country in the world, and India is ranked fifth.

Using local data from the worst-affected regions of the two countries, the researchers could calculate annual changes to life expectancy.

They were able to narrow down the areas of highest priority, recommending upgrades to the existing power generating technologies in Shandong, Henan and Sichuan provinces in China, and Uttar Pradesh state in India, due to their dominant contributions to the current health risks.

Chris Nielsen, executive director of the Harvard-China Project and a co-author of the paper, says: “This study shows how modelling advances and expanding monitoring networks are strengthening the scientific basis for setting environmental priorities to protect the health of ordinary Chinese and Indian citizens.

“It also drives home just how much middle-income countries could benefit by transitioning to non-fossil electricity sources as they grow.” − Climate News Network