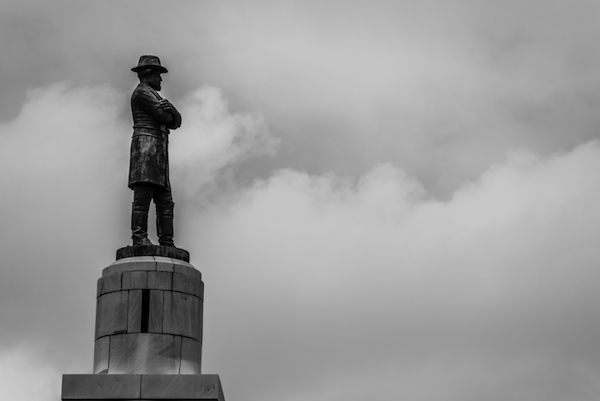 In the aftermath of two tragic wars perpetrated and rationalized on the socially constructed notion of “race” and racial superiority, and tied to issues of economics and land acquisition or maintenance, how have Germany following defeat in WWII and the U.S. south after losing the Civil War taught succeeding generations and commemorated their involvement in perpetuating the atrocities they instigated?

Since some time has passed and no single strategy has remained fully consistent in time and place, nonetheless, we have witnessed certain trends in addressing this important question.

In the immediate aftermath of Germany’s total and humiliating defeat, in terms of the Potsdam Conference (July 17 to August 2, 1945) after Germany’s unconditional surrender on May 8, 1945, the allies divided Germany into four military zones of occupation: the Soviet Union in the east, the U.S. in the south, Britain in the northwest, and France in the southwest, until the final reunification of the country following the fall of the Berlin Wall in November 1991 and the demise of Soviet Union one month later.

A national constitution serving as the law of the land holds together the laws of the unified BRD (German: Bundesrepublik Deutschland; English: FRG/Federal Republic of Germany), comprising 16 partially sovereign states.

The BRD from its inception has mandated a “denazification” campaign to eliminate the promotion, production, and the nostalgia of a bygone era of German shame, humiliation, and regret.

Except for extreme right-wing candidates for elective office, none mimic or paraphrase a motto of “Making Germany Great Again,” which would be understood immediately as a not-so-subtle return to the divisive and murderous racism of the past.

The German constitution outlaws the former Nazi swastika and other remnants as “symbols of anti-constitutional organizations.” The government bans their sales and display. Also banned in public are the Nazi salute and statements such as “Heil Hitler.”

Posting pictures with Swastikas or Nazi slogans is also illegal on social media. Violators of these provisions risk prison sentences.

The Criminal Code grants exceptions when used for “civil education, countering anti-constitutional activities, art and science, research and education, the coverage of historic and current events, or similar purposes.”

In addition, private citizens may own Nazi memorabilia if only a very limited number of people view them. Displaying a Nazi swastika flag in a window, for example, is generally not protected under this exemption.

No monuments celebrating, honoring, or commemorating the racism and unmitigated horrors of Nazi leaders, military personnel, or other perpetrators have been erected in Germany. May 8 each year in Germany has been celebrated by many as “Liberation” Day” from the Nazi regime.

Young people have access to historical exhibits, theater and art productions, and an endless array of books all intended to expose the truth about the brutalities propagated by the Nazi regime.

Students travel to former concentration camps to learn firsthand the loss of all human and civil rights, the enslavement and murder of Jews, homosexuals, Roma, Jehovah’s Witnesses, people with disabilities, communists, the so-called “work-shy” vagrants (unemployed and homeless) and others.

Such visits differ significantly from many of the school field trips organized for U.S. students in reminiscence of the “glory days” of antebellum southern plantations.

Though no memorials stand to honor any former Nazis, the German Parliament voted to dedicate 4.5 acres to a Memorial to the Murdered Jews of Europe (also known as the Holocaust Memorial), plus several smaller monuments located throughout Germany. A beautiful and extensive Jewish Museum has been erected in Berlin close to the Holocaust Memorial.

German schools do not deeply examine the actual military events of the war in consideration that to emphasize the war itself may incite positive attitudes of Nazi territorial expansionism. Resistance to Nazism in Germany and throughout its occupied territories is taught widely and resisters touted as heroes.

In my hometown of South Hadley, Massachusetts, a clear example can be witnessed of the vastly different frame of reference that we in New England reflect on the U.S. Civil War from those in the former Confederate states. If one places in the mind the Civil War monument erected on our town Common next to one in a Southern state, this is what one will see:

A high and tall, stepped concrete and granite pedestal dedicated in 1896 (some 31 years following the war) to the 224 local citizen-soldiers. Atop the pedestal stands a Union soldier looking outward into the distance holding a rifle perpendicular to the ground. On the granite pedestal is inscribed:

This monument is erected to commemorate the loyalty and patriotism of our citizen soldiers who fought for liberty and the Union in the great rebellion of 1861-1865.

Many monuments and commemorations on the Union side term the Civil War “the Great Rebellion” of “Southern Rebellion,” while the states of the former Confederacy call it “the War of Northern Aggression.”

Jefferson Davis was inaugurated as the President of the Confederacy on February 18, 1861 on the steps of the State Capitol in Montgomery, Alabama.

Atop the high granite column stands a bronze statue of a woman representing “Patriotism” holding a furled flag in her left hand and a sword in her right. Down at the base stands 4 pedestals on top of each standing granite statuary with bronze relief representing an officer of the 4 branches of the Confederate military, and with these inscriptions:

“The seamen of Confederate fame startled the wondering world: for braver fight was never fought, and fairer flag was never furled.” (italics added)

“The knightliest of the knightly race who since the days of old, have kept the lamp of chivalry alight in the hearts of gold.” (italics added)

“Fame’s temple boasts no higher name, no king is grander on his throne: No glory shines with brighter gleam, the name of ‘Patriot’ stands alone.”

“When this historic shaft shall crumbling lie in ages hence, in woman’s heart will be, a folded flag, a thrilling page unrolled, a deathless song of Southern chivalry.”

The Southern Poverty Law Center found in its updated 2016 report, 114 Confederate symbols have been taken down since the Charlottesville neo-Nazi white supremacist march and murder, though currently a total of 1,747 Confederate-related symbols remain standing across the United States, including:

Since the brutal killing by Minneapolis police officers of George Floyd, an unarmed black man, and the worldwide demonstrations demanding an end to police practices and policies inordinately symbolically and literally crushing the necks of people of color, we seem to have entered a watershed moment bringing us to a point of finally owning up to our collective legacy of racism in the United States and elsewhere.

Under increasingly intensive pressure, South Carolina led the way in 2015 by removing the Confederate flag from the State House grounds where it had hung since 1962. Other cities slowly and often reluctantly followed suit. Mississippi has recently become the final state to ban the Confederate symbol from its state flag.

Those on the other side of the issue who demand retaining these monuments and symbols argue “tradition” since they say these a part of their “heritage,” and they represent an era of American history.

These emblems and personalities do, in fact, represent an era of American history, an era of warfighting for the right to continue the enslavement of other human beings, one in which many Southerners believed they had the “God” given right to torture, work to death, separate families, rape, and otherwise abuse others for their own economic, social, and cultural benefit.

Most certainly, these monuments and symbols represent “tradition,” but a tradition worth remembering only as one of the leading shameful eras in our national story, and not as one to romanticize or admire.

These symbols actually inspire people to violence while for many others, they bring to the surface a legacy of oppression and pain.

Under the guise of preserving “tradition,” proponents of keeping Confederate symbolism fail to realize that most of the monuments were erected well after the Civil War toward the end of the 19th- and into the 20th-century. Southerners imposed these monuments primarily as a weapon of intimidation against black people in the Jim Crow South during what has come to know as the “Redemption Period.”

The so-called “Redeemers” included a coalition of the southern faction of the Bourbon Democrats: a very conservative and pro-business arm of the Democratic Party whose stated goal of “redemption” was to rid the South of liberal Republicans, northern “carpetbaggers,” and “scalawags” (poorer non-slaveholding whites).

Germany, though, offers a good model to place the past into a truer and proper perspective.

Facebook169Tweet73Pin1EmailShares243
wpDiscuz
0
0
Would love your thoughts, please comment.x
()
x
| Reply
Share this ArticleLike this article? Email it to a friend!
Email sent!