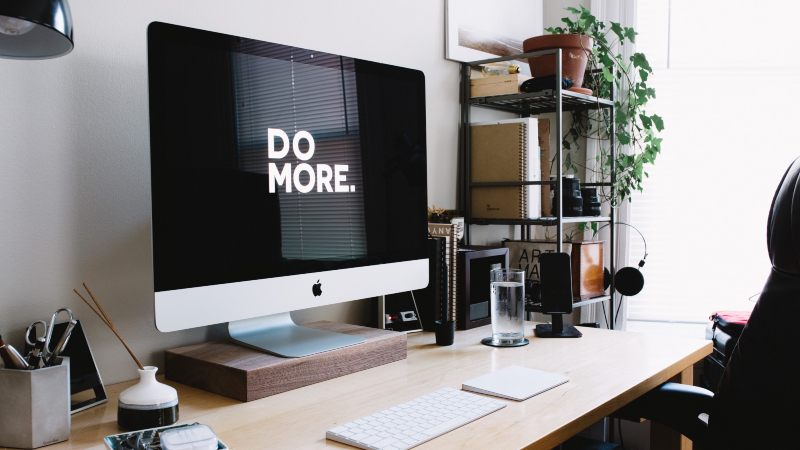 When schools began to close in my area, most switched to remote learning. I, as a teacher, and my students are required to keep video cameras on for the entire class.

I think every day when I look at myself on screen that I need a haircut. Zoom’s “Touch Up My Appearance” feature isn’t doing enough for me, frankly. I know all it does is soften the camera focus, but I’m pregnant and sleep-deprived. My face looks sallow and bloated, and my overgrown haircut isn’t helping much.

My students wear pajamas every day. I’m not sure some of them are bathing on a regular basis. One of them weeps on camera nearly every class. He keeps his camera on to “follow” the rules since he has to be marked absent if he turns it off, but I know it’s hard. I feel for him. I feel with him.

There has been a theme running through my LinkedIn, Twitter, Instagram, and Medium feeds lately, and that theme is “productivity.”

What are you using your quarantine for? Don’t give up your goals, double down on them! Learn a new language, take an online course, read through your TBR stack!

I’m a pregnant WFH (working from home) mother, stuck under the same roof for nearly a month now with twin toddlers and a fellow WFH husband. Anytime I see one of those posts, surveys, or articles come up from one of these “productivity” psychopaths, I want to scream “READ THE FUCKING ROOM.”

The message, with all of these types of posts, is that, whatever you’re doing, you’re not doing enough. Nick Martin, in “Against Productivity in a Pandemic,” says it best: “every nanosecond of our lives must be commodified and pointed toward profit and self-improvement.”

The messaging behind this is shame-based and damaging at a time when we are, as a society, experiencing collective trauma.

When the work schedule for teachers was originally put out by my school, we were expected to teach five classes per day, thirty minutes each, with one thirty-minute conference call with all faculty and admin once a week. After two weeks, when it became obvious that the school would be closed indefinitely, they began adding to our workload. It was as if they were needing to justify continuing to pay us our monthly earnings.

Now, on top of teaching five classes a day, we need to have “office hours” for forty-five minutes four days a week as well as attend five thirty-minute mandatory conference calls a week. This means we originally went from working thirteen hours a week to eighteen and a half hours.

Working from home for thirteen or eighteen and a half hours a week may seem laughable, especially when I had to be at school for forty hours a week before the pandemic, but you’d be ignoring a few things. My time in front of students does not include prep time or grading time, and I am still expected to enter one to two grades a week per class. That is time I need to make for myself now.

Further, and the biggest issue, is that I have two children at home full-time with me now. They used to be in school, learning things like shapes and colors, and now I somehow have to summon up the bandwidth to go from teaching 70+ students a day to my own children during my breaks.

It’s amazing I’m getting by right now. It’s amazing my family is okay right now. We will take some income hits, but we’re not yet one of the millions currently seeking unemployment, and hopefully we won’t be.

I’d be amiss if I didn’t mention all the memes I’ve seen about how Isaac Newton laid the groundwork for his theories of gravity and optics and invented calculus during a pandemic, or how Shakespeare wrote King Lear and several other amazing plays and poems when the plague was killing 30 or more people a day.

These memes don’t speak to me because these memes are about men, men who had that kind of freedom because of the women in their lives. Newton was unmarried and childless, but he lived with his mother, and his family had servants. He did not have to worry about taking care of children, and he likely didn’t have to prepare his own meals or wash his own clothes.

Though we don’t know much about Shakespeare, he likely had a wife, children, and a servant. It’s very likely those women handled all of the domestic burdens.

It’s great they accomplished so much, but they did because the onus of work fell on others. I don’t get that freedom today. I don’t know many women who do.

These “productivity” zealots forget that maintenance and care can still qualify as productive, that sometimes we just need to work on being instead of doing.

I worry about the damage some of these people will cause because they’re so intent on fighting against just being.

Recently, a friend of mine wrote openly on Facebook about her struggles with mental illness during this time. Many of the comments she received weren’t helpful. One responder actually said, “Have you thought about learning how to bake bread? It’s so meditative!”

I don’t want to be a monkey that throws feces, but I kind of feel that way sometimes. I get so intensely angry at these ridiculous recommendations.

What I think we need more now than ever are reminders of solidarity, encouragement that we’re all doing okay, however that needs to look, and that we’ll hopefully all make it through this okay if we continue to follow recommendations.

We can offer to help each other. We can remember that we deserve love and kindness and naps, and we can ignore those stupid voices, internal or external, that tell us we should take a Master Class or clean out our closets. 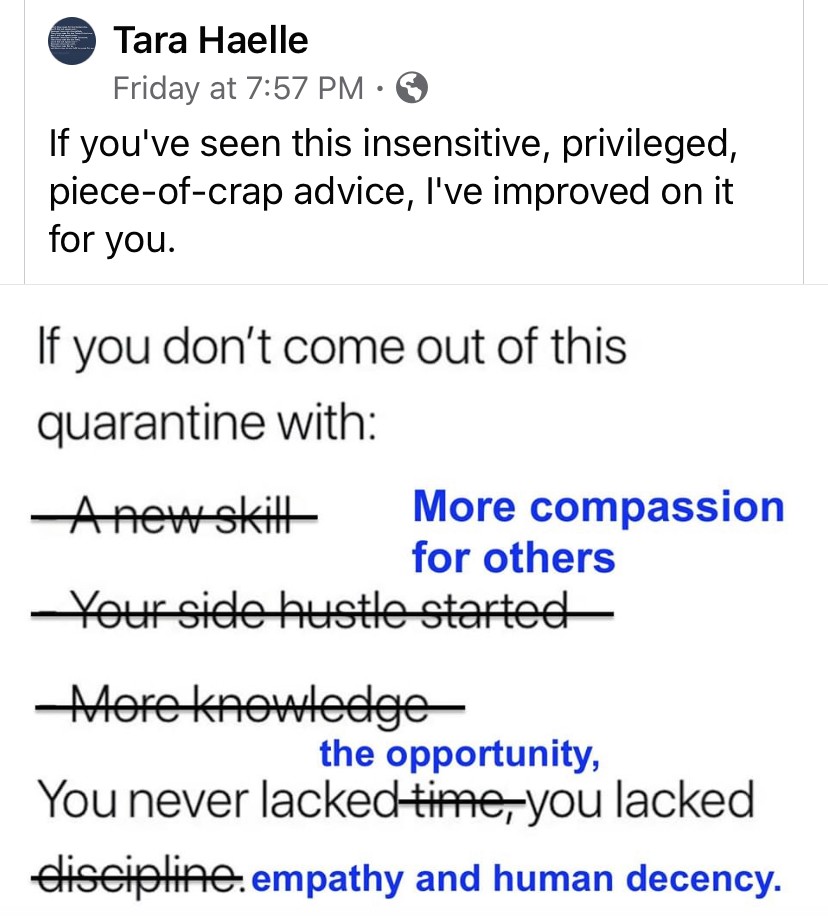 Photo by the author

Facebook8Tweet2Pin36EmailShares46
wpDiscuz
0
0
Would love your thoughts, please comment.x
()
x
| Reply
Share this ArticleLike this article? Email it to a friend!
Email sent!