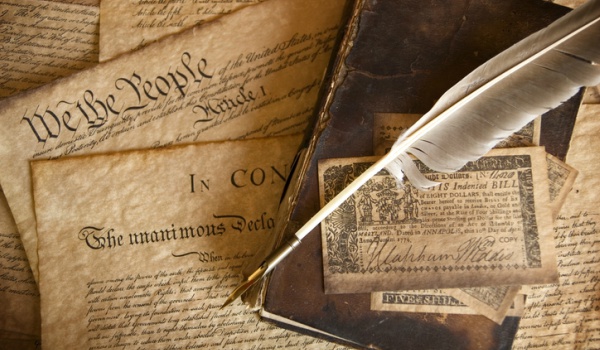 The Founders made the Constitution difficult to amend on purpose.

It’s understandable they didn’t want anybody fooling with a document that had been so hard to put together in a manner that had a chance of being ratified.

Perhaps, as a result, things have a history of getting bent if not broken to avoid the two methods set out in Article Five — -even as history marches on and unanticipated but critical situations arise.

Say, for example, a weapon that could (as we used to claim when I was in the Air Force) take the top three inches off the Soviet Union and the top six inches off the United States with no way to stop holocaust after decisions that have to be made in minutes.

The Constitution vests the power to declare war in Congress, which cannot order a pizza in minutes. This means the power moves elsewhere. It’s become the president, but it could have been the chair of the joint chiefs of staff or the cabinet-level secretary never created, the secretary of peace.

For the record, an amendment can be passed by two-thirds of both houses of Congress.

Or, a constitutional convention can be convened by two-thirds of state legislatures and that convention can entertain as many amendments as the delegates wish.

In either method, the result must be ratified by three-quarters of the states acting either through their legislatures or state conventions convened for the purpose.

That gauntlet has been run 27 times.

Before moving on to talk about informal amendments, I’d like to mention one formal amendment that did not make the cut but every undergraduate constitutional law class I ever taught was convinced that it had: The Equal Rights Amendment, as in for women, is not part of the Constitution, having failed ratification in spite of extensions of time granted by Congress to accomplish it.

If memory serves, the two primary objections brought up in public debate were unisex bathrooms and women serving in combat.

Civilization as we know it was saved when the ERA failed.

What’s that you say? There are unisex bathrooms all over the place and U.S. military women serve in front line combat units?

I don’t have to account for that, because we live in a time of post-truth politics.

After the Civil War, the reconstruction amendments — 13th, 14th, and 15th — were proposed to the end of memorializing the result of the bloodiest war in U.S. history. Those amendments were the only kind of sort of ratified, in that the former Confederate States had to ratify them to be re-admitted to the union. I can’t find that process in Article Five.

There is a sense in which the SCOTUS amends the Constitution in every term. If the 4,543 words of the original document contained a clear answer to the sorts of questions that wind up in the SCOTUS, the high court would be out of work by now.

Because the U.S. legal system still exists in the common law tradition, our law normally curves gently rather than lurching. The courts are required to treat like cases alike and keep the law predictable, standing by prior decisions. Decisions accumulate like so many barnacles, and there was quite a crust at the time of the Great Depression. The Constitution had been interpreted and interpreted again to require that both federal and state governments stay out of business regulation.

Wages? Hours? Child labor? None of these subjects were proper subjects for laws. The economic system would right itself without being pushed and prodded by Washington. And let’s not get started on major feats of social engineering like Social Security. When the SCOTUS got to speak, most of the first wave of New Deal legislation was struck down, 5–4.

President Franklin D. Roosevelt was unwilling to wait for deaths or retirements to offer him appointments to join justices Harlan Stone, Benjamin Cardozo, and Louis Brandeis in allowing an expansion of federal power dehors the Constitution.

New Dealers believed that the constricted view of federal power was also dehors the Constitution, and the so-called “Three Musketeers” were voting to allow Congress to enact legislation as far-reaching as the emergency in which the country found itself.

A string of 5–4 defeats led to FDR’s so-called court-packing plan to create new judicial appointments by increasing the size of the SCOTUS, a tactic likely to be resurrected if President Trump is able to replace Ruth Bader Ginsburg. I commend to your listening FDR’s “fireside chat” broadcast on March 9, 1937, in which he explained the problem in language much more sophisticated than any politician would dare employ today.

While the court-packing idea set off a wave of negative editorials and speeches (in those days, people would attend a political speech as a public entertainment) that all but assured defeat, the SCOTUS reacted to the next wave of New Deal legislation with 5–4 victories.

This change from 5–4 no to 5–4 yes is called in legal history “the switch in time that saved nine.” It rendered court-packing moot as it destroyed the idea that laissez-faire capitalism was contained in the words of the Constitution.

In present times, it’s hard to turn on a news program without hearing a discourse on what the Constitution has to say about foreign nations interfering in U.S. elections. There is no question that such interference is unlawful and even soliciting such interference — as President Trump has done publicly — is unlawful, but I remain unable to find the words in the Constitution that require the existence of those laws.

There is no question that the Founders feared foreign nations wielding influence on U.S. politics. The Founders themselves were roughly divided between Anglophiles and Francophiles and each harbored some distrust for the other. But the sanctity of U.S. elections probably is one of those principles thought so obvious it did not need to be written down.

The requirement that the POTUS be native-born and the prohibition on foreign emoluments are in the Constitution and the motive for them appears to be the protection of our politics from foreign influence. That argument cuts both ways in that the motive for those two provisions shows intent but, on the other hand, if the Founders could ban one form of influence then they could have banned other forms.

There is also the fact that modern politics requiring millions of dollars was far, far in the future when the document was written. That makes it as unlikely they could have anticipated the cost of saturation media coverage as that they could have anticipated atomic weapons. The money that concerned them was bribery, not political donations, assuming there is a difference.

This back and forth over whether the Constitution requires a ban on foreign political money can be argued both ways, but it seems highly unlikely that the bans currently in the law are unconstitutional. There was an attempt to move in that direction in a 2011 case, Blumen v. Federal Election Commission.

Aliens lawfully resident in the U.S. on temporary work visas and hailing from nations thought to be friendly to the U.S. and to democracy (Israel and Canada) sued to invalidate the bans on “foreign” money on First Amendment grounds. Their argument was crushed in the D.C. Circuit Court of Appeals. I am deleting case citations for ease of reading, but the words within quotation marks are words of the SCOTUS relied upon in the D.C. Circuit:

[T]he Supreme Court has drawn a fairly clear line: The government may exclude foreign citizens from activities “intimately related to the process of democratic self-government.” As the Court has written, “a State’s historical power to exclude aliens from participation in its democratic political institutions [is] part of the sovereign’s obligation to preserve the basic conception of a political community.” In other words, the government may reserve “participation in its democratic political institutions” for citizens of this country. When reviewing a statute barring foreign citizens from serving as probation officers, the Court explained that the “exclusion of aliens from basic governmental processes is not a deficiency in the democratic system but a necessary consequence of the community’s process of political self-definition.”

We read these cases to set forth a straightforward principle: It is fundamental to the definition of our national political community that foreign citizens do not have a constitutional right to participate in, and thus may be excluded from, activities of democratic self-government. It follows, therefore, that the United States has a compelling interest for purposes of First Amendment analysis in limiting the participation of foreign citizens in activities of American democratic self-government, and in thereby preventing foreign influence over the U.S. political process.

The D.C. Circuit opinion quoted above appears to be just a hair from finding that the Constitution requires exclusion of foreign nationals from funding our politics. It certainly supports the idea that the Founders thought the matter so obvious it did not need writing down.

Violation of these very laws is being put forward as a ground for impeachment of President Donald John Trump, who obviously does not find the exclusion of foreign nationals from giving things of value to political campaigns to be obvious.

How does this amend the Constitution? If President Trump is impeached for violating the laws against soliciting foreign contributions and the Senate fails to convict, those laws that arguably were required by the Constitution will have been shown, beyond cavil, not required.

The author of the D.C. Circuit opinion quoted above appears to differ with President Trump when he comes so close to finding the prohibition to be required. Some might find that the judge’s identity important to the debates in which we are likely to be immersed for at least the rest of the year.

The Circuit opinion in the Blumen case was authored by Judge Brett Kavanaugh, who has since 2011 gotten a new job.