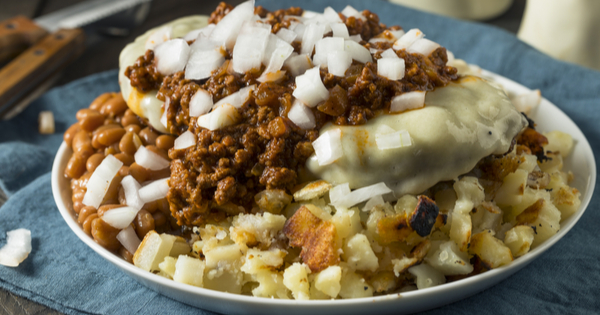 When you realize how perfect everything is you will tilt your head back and laugh at the sky.

My friend and I were standing at Nick Tahou Hots in Rochester, waiting in line to order garbage plates.   It was 1987 and I was a senior in college.  We were both home for winter break.  It was late and we were woozy and hungry after a night out dancing and drinking beer.

Actually, more like drinking beer and then dancing.   And by dancing, it was only one song.  Just the two of us on an empty floor in a near-empty bar just before last call.

We staked out opposite ends of the space and swerved and swayed more or less in place, each of us wearing long, wool-blend charcoal-gray coats, trying our best to channel the tortured, disdainful cool emanated by Mickey Rourke in 9 1/2 Weeks.  It was a film that came out a year earlier, and most of my male peers then considered Rourke’s character a teaching tool on how to look and act sexy.

Of course, my friend and I weren’t that cool, or that tortured, and not really disdainful.  More we were two young guys with pleasant demeanors, who liked to laugh, to play and to talk sports, and to share stories about our experiences at our respective schools.  Which is what we had done most of that night, sitting at a small round table and trading tales over pitchers of Genesee Cream Ale, a cheap, sudsy, Western New York staple (you could really taste the savings!)

I wish I remembered exactly the tune that propelled us from our stools and onto the dance floor.  I have a hunch it was “True Faith” by New Order, but I cannot be precise.  I had been introduced to this band (created by the surviving members of Joy Division) and others from the alternative music genre with full force a few years earlier, during my sophomore year, by a college friend who worshipped, and blasted from his cave-style dorm room, tracks put out by bands like Big Country, Echo and the Bunnymen, The Jam and The Clash.  He also had a fondness for hard-core punk, the sort of fast-beat, pulsing darkness presented by The Dead Kennedy’s, Black Flag and the Bad Brains.  And more comedic, lighter, lyrically-cynical groups such as The Dead Milkmen, Wall of Voodoo, and Camper Von Beethoven.

His passion for this music became mine, and I did my best to torment bar DJ’s and live club bands with alcohol-soaked pleadings to play, say, a Smith’s song, or something from the Violent Femmes.  But that night, with my friend, the song came out of the blue and without any such prompting.  It caught us off guard, but also inspired us to move.  My friend had also gotten the “New Wave Bug” at college, and maybe it was a chance to showcase in our native city our changing selves, even if the only people watching and caring were ourselves.  But while I have a hard time recalling the details of the moment, the feeling remains with me to this moment – of being young, but no so young, of being different but not so different, of being hopeful for the future but scared to let go of the past.

Back then, on the dance floor, we put no such deep thought into what we were doing.  We finished our gyrations, drained our glasses, and headed to Nick’s.  It was my first time at the restaurant, but my friend was a regular.  He was a true fan and told me all about garbage plates on the way over – how awesome they tasted and what was in them (the traditional plate consists of two sides, usually home fries and macaroni salad, with options of baked beans or French fries, and a protein, either two burgers or hot dogs, swimming in a hot meat sauce.)  He even shared with me a little history behind the dish, how it’s original creator made it for college students who came in asking for all the “garbage” from the day’s offerings on a plate to eat.

Whatever the origin, by the time we got to Nick’s that night, the “plate” was fully integrated into the Rochester culinary scene.  Despite the late hour, or maybe because of it, the place was packed.  We waited in single file for some time until it was nearly our turn to order.  A man was furiously working a large fry grill not far from where we all stood, wielding a spatula with slicing and scooping deftness, cooking meat and potatoes and other items and dumping the concoctions onto plastic plates and placing them on the counter for customer pick up.  We were next when a young man, about our age, got his order.  I remember he looked at his meal, frowned, and then returned it, voicing his displeasure to the grill worker that he had not received the side he wanted.  I will never forget how the grill worker snatched the plate and threw it hard into an actual garbage can.  He then wielded his spatula to correct the order.

My friend, next to me, watched with disgust.  Finally, he tapped the young guy on the shoulder and said, clear and calm:

“At Nick’s,” my friend explained.  “You get what you get.  What they put on your plate you eat is what you eat.  There’s no complaining here.

And that was that.  The young guy went off with his new order, and we got our plates next.  And we ate, as my friend said, what we got.

Maybe you have a similar moment in time, a song you danced to, a meal you’ve eaten with friends, that you can pinpoint as defining for that period of your life.  But that was mine.  When I think of the late 80’s, transitioning from college to the world of work, of truly entering adulthood, that is the night I think about.

Decades later, my friend’s words take on even greater meaning.  In some way, I consider myself now, as a middle-aged man, to be like a garbage plate: my experiences, my ups and downs, triumphs and tragedies, good times and bad times, all that I’ve gone through, making up the mixed-mash meal that is me.

You truly do get what you get in life.  It’s up to us to decide what to with it.