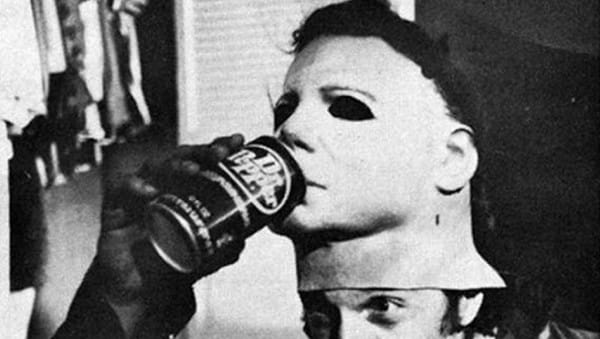 How do I love the zombie related holidays???

Halloween, Day of the Dead, Easter…let me count the ways! Speaking of the magical bunny that travels the globe to deliver high fructose corn syrup and plastic eggs full of silly putty to deserving children (what do the bad ones get? Heroin and razor blades?) the genre of risen-from-the-dead in film has its own unique lore and whimsy. And just like on Good Friday, there is great comfort to be had in knowing that a world exists in which no one is ever really dead for sure. You can get stabbed in the neck with a badass knitting needle, gouged in the eye with a wire hanger, shot multiple times and fall backward off a second story balcony and live to tell the tale!

Not that Michael Myers is the chatty type. He is a man of action! A man, not unlike Jesus, of reanimation!

A man, also not unlike Jesus, with morals and values that he wants to share with the world! That is the other comforting thing about horror films—they have rules of conduct that can ensure your salvation.

Horror films and religion have a lot more in common than you might suspect, so let’s go there, shall we?

First off, the most obvious parallel is that both horror films and religion aim to scare you. Don’t agree? Most religions rely on the acceptance of an invisible entity that will punish you if you displease it or don’t follow its rules…hey, that sounds like the basic premise of a lot of great horror!

The Changeling, The Haunting, Burnt Offerings…invisible entities that punish you if you don’t follow the rules are scary as hell! Both religions and fright flicks are also heavy into the mythology that there are evil spirits (devils or Satan) that are out to trick you, whether by possession or temptation, into breaking the rules so that you will be punished by spending eternity in their company.

On this topic, The Exorcist is one of my top ten films EVER!!!

I don’t believe in the devil, or a version of God who lets the (imaginary) devil screw with his constituents, BUT it is fun and scary to pretend, right? Another thing is that both horror films and religions want your MONEY. Although the horror films only require the one-time admission fee.

There is no promise that giving EXTRA money to the horror film industry will get you any kind of protection from God, or even Harvey Weinstein.

Some religions promise you eternal life; Jehovah’s witnesses even think the saved will be resurrected after Armageddon, which seems frightening to me. Zombies also have eternal “life”, but it doesn’t look like it’s much fun. I think living forever sounds horrible, but I must be a minority. Michael Myers clearly agrees, however, because each time he resurrects he comes back more vindictive than ever!

Even Jesus only hung around for a few days, and that was to prove a point. Speaking of Jesus, his “frenemy” doubting Thomas would TOTALLY be the first to go in a classic horror scenario. “I don’t believe Jesus came back from the dead, I want proof, I want to put my hands into his wounds myself…”

WHAM! In the horror film version of that story, Jesus would cram his fingers into gory wounds, pierce his hands with nails for irony and say something like, “Do you doubt now, Thomas?” Thomas would slump to the ground, dead. And Jesus would kill the rest of the disciples for very good moral reasons, I’m sure.

Horror films and religion both posit that the good ones are “saved”. How do you know if you are a good one? Premarital sex, drugs and being unkind to the less fortunate get you a one-way ticket to hell in either. The meek shall inherit the earth!

And live to be the “final girl” in horror.

It is usually a girl that makes it to the end of any good horror film because let’s face it, a boy who doesn’t drink, have sex or bully is really just a loser, and nobody wants to watch a loser for 90 minutes. Virginal girls seem to have superpowers (like giving birth to Jesus!!!) while virginal boys seem like they might need a diaper change and a good burping. And woe to him that tries to lure our goody girl heroine to any immoral behaviors! Lucky thing Ben Tramer was never able to make good on the plan to take Laurie to the dance in Halloween.

Dodged a bullet there, Ben! Metaphorically, of course…Michael Myers kills people with his super strong bare hands. And Ben bites it in Halloween II, so that’s where impure thoughts will get you.

So if you, like me, enjoy being scared, you can curl up on the couch with your Netflix account…or go to church! If you like to listen to people telling you stories about a mysterious, unseen entity that enacts its own brand of justice on a hapless world, you should totally check out John Houseman’s opening monologue from The Fog. Or, you know, go to church.

If you like the idea that sex outside of marriage is bad and you should be punished for having it, you should go see the super scary film It Follows. Or church again.

If you like the concept of people coming back from the dead, pretty much any film by George Romero will work…or Easter mass!

Happy Easter, btw! Enjoy your jellybeans and the only benevolent zombie aside from Ed at the end of Shaun of the Dead. Great flick for laughs AND scares, if you are in the market.

Last thing religion and horror films have in common—get a good one, and it can be a real lifesaver. I feel totally prepared for both the possibility of an afterlife AND a zombie apocalypse. How can that be a bad thing?