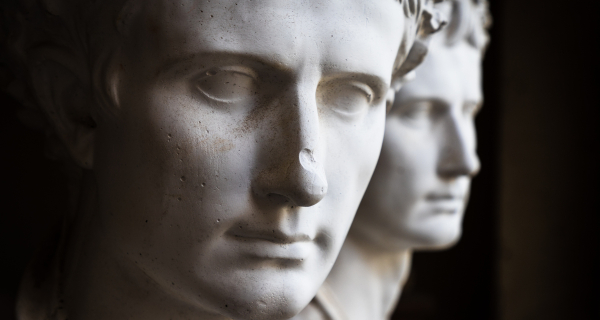 The greatest empire is to be emperor of oneself. — Seneca, Letters, 113

When I came up with the title of my latest book How to Think Like a Roman Emperor it was intended to have a double meaning. First of all, of course, I had in mind a specific Roman emperor. Not one of the bad ones like Caligula, Nero, or Commodus, but rather one of the good ones: Marcus Aurelius. That’s made explicit in the book’s subtitle: The Stoic Philosophy of Marcus Aurelius. Indeed, we might say that we have an excellent guide to thinking like the Roman emperor Marcus Aurelius in his private notes, known today as The Meditations.

However, I was also referring to one of the famous paradoxes of Stoicism, the notion that being a king, or a ruler such as an emperor, is actually a state of mind.

We can all be kings or emperors, in this sense, as long as we free ourselves from certain unhealthy desires and emotions, which the Stoics call the “passions”. We might view this as a striking metaphor, although the Stoics intended it to be taken more literally. The true meaning of kingship, for them, is self-determination and freedom from slavery to our passions. Most of the individuals, though, who are popularly called “kings” (or “emperors”) aren’t actually worthy of the name.

Over a hundred years before the Stoic school was founded, Socrates had considered equating moral wisdom with the art of kingship, according to Plato’s Euthydemus. As is often the case, notions hinted at in the Socratic dialogues appear later to have been embraced more fully by the Cynics and their philosophical heirs the Stoics. Indeed, according to Diogenes Laertius, Zeno, the founder of Stoicism, wrote a lost book On Kingship. We’re told that he said, presumably in this book, that as only the wise are truly free only they can truly be called kings. This obviously seemed ridiculous to many people. The third head of the Stoic school, Chrysippus, had to defend his paradoxical use of the word “king” by arguing that a true king must know the difference between good and evil, and that only the genuinely wise can be said to possess this knowledge. Once again, therefore, only the wise man can be called a king.

When Epictetus later says that “An ill-fortuned king does not exist more than an ill-fortuned god”, he means that a true king makes his own good fortune out of whatever circumstances befall him in life (Discourses, 3.22). According to the Stoic definition, the mythic tyrant Eurystheus wasn’t a true king, although he appeared outwardly to be one. How could he be if he did not have sovereignty over himself? By contrast, his cousin Hercules, despite being constrained to complete the Twelve Labours, and having no kingdom of his own, was a true sovereign because he exercised wisdom and self-mastery of the kind revered by the Stoics.

[Zeus] does not supply me with many things, nor with abundance, he does not will me to live luxuriously; for neither did he supply Hercules who was his own son; but another (Eurystheus) was king of Argos and Mycenae, and Hercules obeyed orders, and laboured, and was exercised. And Eurystheus was what he was, neither king of Argos nor of Mycenae, for he was not even king of himself; but Hercules was ruler and leader of the whole earth and sea, who purged away lawlessness, and introduced justice and holiness; and he did these things both naked and alone. — Discourses, 3.26

The training in self-mastery endured by Cynic and Stoic philosophers is in the service of attaining the sort of inner “kingship” possessed, at least according to the their interpretation of the myths, by the hero Hercules: “Great is the combat, divine is the work; it is for kingship, for freedom, for happiness, for freedom from perturbation” (Discourses, 2.18).

According to Stobaeus, the early Stoics held that the wise man is the most fulfilled (eudaimon) type of person and therefore also the most blessed, prosperous, pious, and indeed the most like a king and a general. Hence, the vicious, foolish and base are the opposite, being essentially bankrupt and servile by their very nature. Therefore, “only the wise man is a king and regal, but none of the base is”, because true monarchy is absolute and superior to everything else, we’re told. Likewise, “only the virtuous man rules, and even if he does not in all circumstances do so in actuality, still in all circumstances he does so by disposition.” In other words, even if he lacks any worldly power, the wise and virtuous man is still kingly in his very character.

By this standard, men like Socrates and Diogenes the Cynic were kingly and free. Socrates lived in relative poverty, was ridiculed by many Athenians, condemned, and eventually cast into prison and executed. Diogenes was an exile who lived like a beggar, was mocked even by children, and ended up being kidnapped and enslaved by pirates. However, they were considered wise and therefore absolutely free. Powerful rulers like Xerxes I, the Great King of Persia, and Alexander the Great, by contrast, were more like slaves than kings, according to this paradox, insofar as they lacked moral wisdom and were ruled by their passions.

The Roman emperor Marcus Aurelius was one of the most powerful men in European history. However, ironically, we can see from his private notes in The Meditations that he dedicated his life to learning how to think like the Stoic philosopher Epictetus, a crippled former-slave who had lived, a generation before him, in poverty.

What are Alexander [the Great], [Julius] Caesar, and Pompey when compared to Diogenes, Heraclitus, and Socrates? For these latter [were wise and free]. As to the others, consider how many cares they had and to how many things they were enslaved! — Meditations, 8.3

If this sounds like he’s being a bit harsh on these great rulers, he does comes back to this point later to justify his remark.

Go on, then, and talk to me of Alexander [the Great] and Philip [of Macedonia] and Demetrius of Phalerum. If they saw what universal nature wishes and trained themselves accordingly, I will follow them; but if they merely strutted around like stage heroes, no one has condemned me to imitate them. The work of philosophy is simple and modest; do not seduce me into vain ostentation. — Meditations, 9.29

Here famous rulers are compared to actors playing a role on stage. They pretend to be regal, heroic, and powerful but if they haven’t mastered themselves, and aren’t living in agreement with Nature as the Stoics described the goal of life, then it’s just an appearance rather than reality. The external trappings of wealth and power are of negligible importance from the perspective of philosophy because, in the grand scheme of things, they’re temporary: “Alexander the Great and his stable boy were brought to the same level in death” (Meditations, 6.24).

In one well-known passage, Marcus does say that he’s seeking to avoid having his character turned into that of a Caesar:

Take care that you are not turned into a Caesar, that you are not stained with the purple; for such things do come about. Keep yourself simple, then, and good, sincere, dignified, free from affectation, a friend to justice, reverent towards the gods, affectionate, and firm in the performance of your duties. Struggle to remain such a person as philosophy wished to make you. — Meditations, 6.30

However, he clearly means that he must avoid being made ostentatious and insincere by his position as emperor, again, like an actor playing the role. On the contrary, the true ruler speaks plainly, without affectation. He is also someone unafraid of death and totally committed to virtue.

When you act, let it be neither unwillingly, nor selfishly, nor unthinkingly, nor half-heartedly; do not attempt to embellish your thoughts by dressing them up in fine language; avoid excessive talk and superfluous action. Furthermore, let the god within you be the overseer of one who is manly and mature, a statesman, a Roman, and a ruler, who has taken his post as one who is awaiting the signal for his recall from life and is ready to obey without need of an oath or another man as his witness. And show a cheerful face to the world, and have no need of help from outside or the peace that others confer. In brief, you must stand upright, not be held upright. — Meditations, 3.5

Marcus uses one of his favourite phrases here to express the self-reliance of the wise and good man, who rules over his own mind: he stands upright of his own accord, without having to depend on others to hold him up.

In his tragedy Thyestes, Seneca expresses the same notion albeit dressing it up in fine language himself:

Ye know not, for high place greedy, wherein true kingship lies. A king neither riches makes, nor robes of Tyrian hue, nor crown upon the royal brow, nor doors with gold bright-gleaming; a king is he who has laid fear aside and the base longings of an evil heart; whom ambition unrestrained and the fickle favour of the reckless mob move not, neither all the mined treasures of the West nor the golden sands which Tagus sweeps along in his shining bed, nor all the grain trod out on burning Libya’s threshing-floors; whom no hurtling path of the slanting thunderbolt will shake, nor Eurus, harrying the sea, nor wind-swept Adriatic’s swell, raging with cruel wave; whom no warrior’s lance nor bare steel ever mastered; who, in safety ‘stablished, sees all things beneath his feet, goes gladly to meet his fate nor grieves to die. — Seneca, Thyestes

In particular, one of secrets of true kingship is the ability to endure criticism and even insults from others with relative indifference. In Hercules Furens, Seneca wrote “’Tis the first art of kings, the power to suffer hate.” This notion perhaps goes back to Antisthenes whose saying Marcus Aurelius later quoted with approval: “It is a king’s part to do good and be spoken of ill” (Meditations, 7.36). If we’re easily upset by negative remarks then we make ourselves into slaves of our own passions, and we grant other people lordship over us. Someone who has the wisdom and strength of character to genuinely rise above these things, though, is a king.

I think, ultimately, though, the Stoic king, or emperor, is someone unafraid of death. Their inner sovereignty and freedom is grounded in the philosophical acceptance of their own mortality. Seneca said that to learn how to die is to unlearn how to be a slave. This reminds me of the final verses from William Ernest Henley’s poem Invictus.

Beyond this place of wrath and tears
Looms but the Horror of the shade,
And yet the menace of the years
Finds and shall find me unafraid.

It matters not how strait the gate,
How charged with punishments the scroll,
I am the master of my fate,
I am the captain of my soul.

Facebook93TweetPinEmailShares93
wpDiscuz
Share this ArticleLike this article? Email it to a friend!
Email sent!