Get Daily Email
Join/Login CLOSE
Home / Featured Content / How Do I Live Without You? 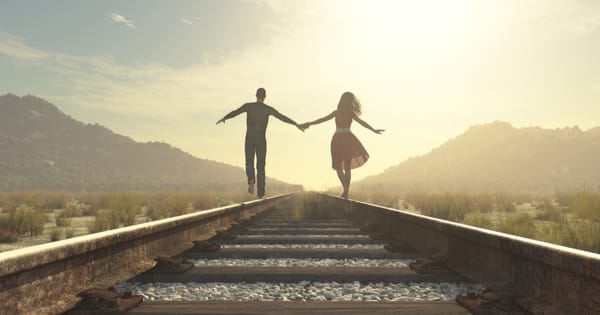 I don’t really listen to country music anymore, but this song still gets stuck in my head from time to time, a remnant from a childhood full of media romanticizing codependency. From “you complete me” in Jerry McGuire, to everything about Bella and Edward in Twilight, codependency has been celebrated so much as “true love,” that when I first began to understand the ways I was codependent, I had a hard time seeing the ways it wasn’t healthy.

In 4th grade, I had a “girlfriend” who I was already imagining a lifelong bond with. I had her buy me a Britney Spears CD for my birthday (upon my request, don’t shame my 10-year-old taste). This CD included a song that wasn’t really a hit, but stood out to me as a favorite back then, called “Born To Make You Happy.”

The point of this article isn’t where it came from for me, or for you, but how to recognize it, and begin to find ways to become less codependent. This is crucial because ironically, the tighter you hold on to people, the more likely you are to find yourself alone.

and divorced. I too got married young (she was 21, and I was 23). We fell in love fast, the summer after she graduated high school. This doesn’t mention the fact that I had just been dumped by my high school sweetheart, who I also thought I would marry, and though I promised myself I’d stay single and work on myself, I was quickly in love again.

I won’t bore you with the ups and downs of our relationship, but I will tell you about the first time I heard the word “codependency.” We attended a service at a Universalist church. If you don’t know what that is, basically it’s a church for everyone: atheists, occultists, satanist, agnostics, etc. It’s actually a pretty cool place for people who want the community of religion without the gross bigoted parts. One of the first sermons we heard was on Codependency.

So what exactly is codependency?

Psych central.com describes it as, “…a person belonging to a dysfunctional, one-sided relationship where one person relies on the other for meeting nearly all of their emotional and self-esteem needs. It also describes a relationship that enables another person to maintain their irresponsible, addictive, or underachieving behavior.”

As the sermon progressed, I began to feel sweat form on each of our palms as we held hands in black foldable chairs.

Did I rely on her and basically all previous relationships for most of my self-esteem? Check.

Did I rely on her to be my therapist for depression and anxiety? Check.

Was I content to never push myself towards individual goals because “my only goal is this relationship”? Check.

That last one might even sound a little romantic, or at least I thought so. There was no focus on Edward making straight A’s in Twilight, his only ambition was Bella. What did Noah do for work in The Notebook? What did he achieve? Other than building a house to prove his love, of course. Was LeAnn Rimes worried about her hobbies and physical health? I was all about the relationship, how is that a bad thing?

And that’s how I treated codependency in the year or so following. This was not a problem; this was a feature. Until it became apparent that I was the only one that felt that way. So we went to a wonderful therapist, and tried to work through it. Spoiler: we didn’t.

But I did continue to see that therapist after it was apparent that the marriage was not salvageable, for many reasons other than just my codependency and immaturity. Through that therapy, I learned a lot about myself, where my codependency stemmed from, and how to recognize and treat it going forward, so I could be a person someone would want to be with, but most importantly so I could be a person that didn’t need that outward approval regardless.

So let’s get to it. Here’s how I became (and am continuing to become) less codependent.

1. Recognize it as a problem

If you’ve read this far you probably have an inkling that you are codependent. You have a lifetime of examples of romanticizing codependency, and it may be difficult to see why loving someone with everything you have is a problem. It is. Loving someone that much, with no focus on personal ambitions, or evolution, is suffocating. Two halves of a person do not make a whole. They make two grotesque halves, that can’t function on a basic level alone. It’s not romantic to expect a relationship to fix you or give you purpose.

What would you do if you were the only person alive? If there was no one around to clap for you or cry with you? This sounded like a hellscape to me and I assume many others. The series The Twilight Zone, which has a history of exploring tortuous scenarios, focused on this in the very first episode. The protagonist didn’t fare well.

My therapist asked this question as I was trying to put my life back together, and after getting over the hellish image conjuring in my mind, I answered with a few things, nothing too outlandish: do outdoors stuff (hiking, climbing, kayaking, etc.), write, read, explore music. Those may not be your answers, but I bet you can come up with a few things that you are passionate about outside of the influence of others. What have you been neglecting about yourself?

Every chance I could after that conversation, I began hiking and exploring the outdoors near where I lived. I had been there for 24 years and hardly touched the tip of iceberg of what there was to see, and swim in, and climb up.

I also enrolled in a Creative Writing program online for my masters. I had been talking about writing for 24 years and never attempted to improve or get published.

I also bought a motorcycle. Okay, maybe I didn’t make all healthy choices, but it was fun, and it was a decision that was for me and no one else. I have since sold it, but I will always cherish riding through the Blue Ridge Mountains on a nice afternoon. You don’t have to go to that extreme, but find your motorcycle ride and gas it.

4. Stay single for a while (for real this time)

You need some time alone. I mean not really alone; use this time to connect with friends, especially those you neglected while being obsessed with your relationship. Or try to make new friends.

Just do not look for romance.

You don’t need it yet. Fix yourself first. Focus on your job. Focus on your passions. Focus on a new skill. In the time since the end of that relationship, I have learned 3 instruments, I have seen 40 something states, I have been out of the country, I have published two books of poetry, I’ve moved 1000 miles away from where I grew up, and yes I eventually found love again.

After spending enough time alone, like intentionally alone, I did meet someone else.

Instead of throwing away all my friends and passions to focus all my attention on her (and be disappointed if she didn’t do the same), I kept them. Instead of using her as my only therapist, I kept seeing my therapist, and now I have built up other coping mechanisms rather than relying on the person I love to be my savior.

Sometimes I think it’s still okay to learn about “true love” from media and art. At the end of John Milton’s A Paradise Lost, we see Adam and Eve leaving the Garden of Eden, “They hand in hand with wandering steps and slow, Through Eden took their solitarie way. (sic)”

The important thing to note here is that even though they are holding hands, they are taking their solitary way. In the epic, Milton argues that the first sin was not Eve eating the fruit, but rather Adam and Eve’s failure to have a healthy relationship. By the end, even though they’ve lost physical Paradise, they’ve gained a new relational one, hence “through Eden,” rather than “Out of.”

That moment is the core of a good relationship, being independent, together. Holding hands, but taking your solitary way.

C. Alexander is an existential poet and perspective blogger living in Providence, RI. His book, The Cosmic Hello: Lessons in Codependence, is now available on Amazon. He has an upcoming poetry collection, Islands and Men being released by Finishing Line Press in early 2020. Sign up for his newsletter, Poetry and Pop Culture here: http://bit.ly/calexanderpoetry.

Facebook23Tweet2PinEmailShares25
wpDiscuz
0
0
Would love your thoughts, please comment.x
()
x
| Reply
Share this ArticleLike this article? Email it to a friend!
Email sent!