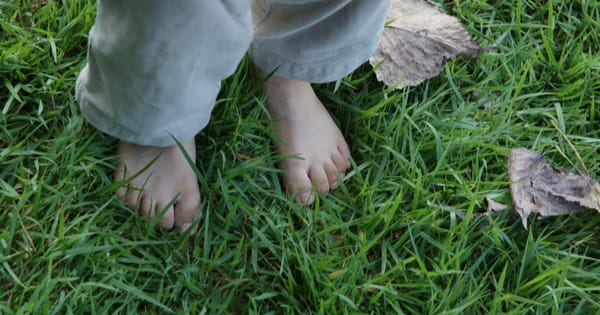 First I heard my daughter screaming.  Then I heard the dog barking.  Those two things are all that is required for dad brain to kick in.

“Hey, hey you.  You sleeping oaf.  Something’s going on.  Your daughter isn’t happy, your dog sounds like it’s going nuts and you are Dad.  So get up dad and do your dad thing.”

Sometimes I don’t want to do my dad thing.  Sometimes I just want to sit and watch football which is code for “I want to take a nap while pretending to watch football.”  I can almost make it through the 3rd quarter of a game nowadays.  But not today, today it was halftime and the screams of my daughter and the barking of my dog were getting fainter.

I know what happened.  Everyone who has kids and a dog knows what’s happened.  The dog has gotten out.

The dog has bolted, flown the coup, made tracks to adventure.  And my daughter is chasing him.  I bet she doesn’t have shoes on.

We got a new puppy.  An 8-month-old mix of lab and boxer.  It was a shelter dog.  The kids were begging for weeks and weeks and weeks to get a new dog.  I finally said ok because I’m not a heartless bastard.

Every kid deserves a dog, a dog that belongs to them.  A dog that they will remember when they are old and I’ll resent every time it craps in the house.  It’s nature’s way of reminding us that no matter how much in charge we think we are, there is always someone’s shit we have to clean up.

The puppy does what puppies do.  It jumps, chews on anything, pees when it needs to, eats whatever I say it can’t and it runs.  It runs very fast.

It’s a puppy, that’s what they do.  I made a deal with the kids.  If they got a new puppy, they would be responsible for taking care of it, cleaning up after it, going to the vet with him and training him.  And to my constant amazement, they have held up this end of the bargain.  But there are times when it’s a little too much, like now–and Dad has to step in.

My daughter was taking the dog out in the backyard to put him on the leash, give him some quality poop time outside instead of right outside my door. The dog saw our family squirrel.  The dog bolted.

The leash snapped because why not?

Dobby, the dog, doesn’t even notice the snapped leash.  We named him after the elf in Harry Potter. We got him at the pound and after seeing him it seemed very fitting.  It also now seems fitting as he is refusing to listen to my daughter and is doing his own thing.

Of course, he couldn’t catch the squirrel.  Jeff, our squirrel, has been ditching our pets for years.  I’m pretty sure that it’s not the same Jeff as when we moved in seven years ago, but I don’t tell the kids that.  One squirrel moves out, another one moves in, they are all named Jeff.  I’m good with this.  He lives in our walnut trees and if he can dodge the dogs, can live like a king.

I make it outside and see my daughter in near hysterics by the edge of our little forest.  She’s got no shoes on and is yelling “Dobby!  Please come back!  Dobby!  Please!”

The dog isn’t coming back and has gone into a thicket.  My daughter has stopped just at the edge.  She yells, pleads, begs.

I got to the edge and calmed her down, letting her know that it’s going to be ok that he hasn’t gone far.  She’s crying a bit because she really loves her dog.  My daughter usually won’t go into the thicket because it freaks her out.  There are bugs in there and where there are bugs there are monsters and homework.  She’s terrified of thickets.

She started to walk forward into the black mass of bushes.  No shoes on at all, to find her dog.  I can hear her heavy breathing, feel her fear, but she’s not going to stop.

My heart breaks.  I’m so proud that my daughter has put her fears aside and is going in barefoot for her dog.  This should be in a book somewhere.  And in this book, the hero shows up.  Me.  I’m the hero.  I’m the hero because I’m dad and dads do what they need to so that their little girls will stop crying.  Besides, dad knows a secret.

I know this because I know that just beyond the thicket is a six-foot-tall wire mesh fence.  I’m guessing that our new puppy hasn’t figured out how to climb it yet.  So I head into the thicket, making sure that I squash any bugs, monsters, and homework that I find.  Sure enough, the dog has its nose against the mesh.  I grab him and throw him over my shoulder (he’s a big pup) and head back to my daughter.  She sees me come out and sprints toward us.

This is the image that I want my daughter to have of me.  A dog over my shoulder as I emerge from the woods.  This is what a hero should look like.  Except he should have more hair and some sort of sword.  I’m working on that.

She hugs me and begins to scold and love the dog at the same time.  Dobby doesn’t understand any of this, of course, he’s a dog.  But he’s happy that he got to create some drama.  Perhaps dogs keep our life interesting and that’s a noble cause, isn’t it? And perhaps the best dogs help our little girls find their bravery to confront bugs, monsters, and homework.

The dog licks my daughter, licks me, and eyes where the squirrel has gone.  I’m sure that it’s supposed to be menacing to the squirrel, and I’m also sure that Jeff flips him the finger.