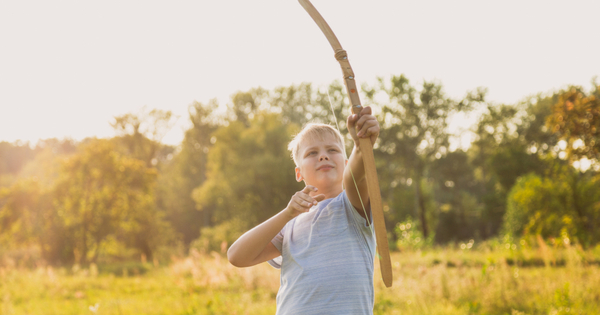 The sky is about the biggest target there is, can’t miss, but also there’s so much of it and only clouds any different, can’t see where the skinny arrow goes, it’s all blue on blue in the Wild Blue Yonder.

Then what does a hundred percent accurate count for?

And somewhere a where where the arrow came down.

That was the day in the middle of summer when everybody but my mother and the baby was gone when I snuck into the garage and saw the bow and snuck out the garage’s back door and tried to shoot an arrow at the target.  Missed and had to get it back from Mrs. Geister’s yard.

Don’t think it was my fault though, the bow’s too hard to bend and when I try and try to bend it then the arrow’s slot slips off the string.  Or, I take aim and get it to bend and my arm starts trembling so that aim’s way off.

I tried three times, three different ways.  Lewis must be super-strong to make it bend.

I put the bow on the ground, the arrow on backward, so I could bend the bow instead of the string, I almost got it to work but instead the bow sprang under my foot and knocked me down.

Arrow just lying there in the grass two feet away.

Finally, I did it the way you’re supposed to with all my might and aiming straight up at the sky and it did sail up and off and disappeared.

The arrow never came back.  Really.  Me under the oak tree cowering with my arms bent over my head because I was sure it would come back straight down and stick in my head or something.

Didn’t.  Never saw it again.  How was I gonna explain to Lewis if he counted his arrows and found one was missing?

Never saw it again—or so I was thinking.

I had a rubber-tipped bow and arrow once, it must have been Gary’s and my mother probably donated it to the Goodwill.  The way it goes when I remember something I haven’t played with it a while and hunt and hunt for and can’t find it and finally ask her—

“You weren’t playing with it.”

“And I thought some other little boy would really like it.”

“Besides, you were too old for it.”

See?  I had everything once and end up feeling like I have nothing.  She’s so sneaky.

Rubber-tipped bow and arrow with suction cups on the tips of the arrows.  That didn’t stick to walls or windows or trees or the garage door or Tippy when I shot her, only to my own forehead and only if I licked it and stood still and didn’t turn my head, and then only for about a minute.  I guess it was old.

Tippy’s our dog.  She’s pretty old too.  She mostly follows my mother around and does things opposite to the way you think she’s going to.  Because, I bet, my mother doesn’t like dogs, my mother likes cats, and I’m allergic to cats and Lewis wanted a pet.  Tippy—her real name’s Tipperary, Dad says, like Long Long Way To Tipperary, and he sings it to her like she’s even listening.

Tippy was supposed to be Lewis’ dog but my mother feeds her so she follows my mother around unless it’s dinnertime when she gets under the table ready to gobble down stuff I won’t eat.

Dad made Tippy her own door to the garage.  She won’t use it, you can’t even push her through it.  When we watch Lassie on TV and Lassie barks, she doesn’t believe it’s a real dog, she won’t even look at the TV.  But if a dog barks a mile away she gets upset, if she’s inside she scampers to the door wanting to go out, if she’s outside, she scratches on the door wanting to come in.  I think she doesn’t believe other dogs exist.

Did I tell you about the dartboard?  But it’s been put away because Lewis and Gary got in a fight about it and I saw it with my own eyes when Lewis walked away and Gary threw a dart and stuck him right in the butt.

I never heard Lewis scream like that before or since and both my older brothers got in trouble, nobody yelled at me or asked me anything about it.

But it’s the next summer now, and Benny and Nicholas and me were playing tag and Benny was “it,” and I ran between houses, the Mitchell’s next door and the Moon’s next to that.  Because the Moon’s live on a corner and the side door faces the side street and the Mitchell’s side door faces the other way, faces my house, this space between the houses has no doors, nobody going in or out, nobody looking out—I mean, in at the windows.

And I’m there a few feet in, in between because there’s a fence, and I’m leaning on the fence and I’m glancing along the way between houses—

Stop looking, watching for Benny to come around the Mitchell’s big tree—

Think, but what was that?  Something I’d seen I didn’t even know what I’d seen.

Looked again, and yep, there was my arrow sticking out of the Moon’s house’s bathroom window.

You wanna believe it came down between houses and stuck in the bathroom window between the screen and the pebbly glass that you can’t see through, through the screen but it didn’t break the glass?

A year ago.  And nobody saw it?

What if someone had been sitting on the toilet and right then it came down?  Funny but of course I guess somebody wasn’t.

See, I was never supposed to touch Lewis’ bow or arrows, I had to wait ‘til he was gone and Gary was gone and my dad was at work and my mother was probably too busy with the baby to be looking out the window.  Lewis’ target was still in place, far end of the yard, full of straw and too heavy to move in and out too much.  His steel bow and his quiver left on a shelf in the garage.  Easy to get.

The target is still where it was in the yard.  I don’t think he’s practiced shooting yet one time this year.  I’ll have to sneak out of the house after dark somehow, and sneak into the Moon’s back yard and around their house and retrieve the arrow and nobody will ever know what I did.  Except for the little hole in the screen.

But they’ll never imagine it was an arrow.