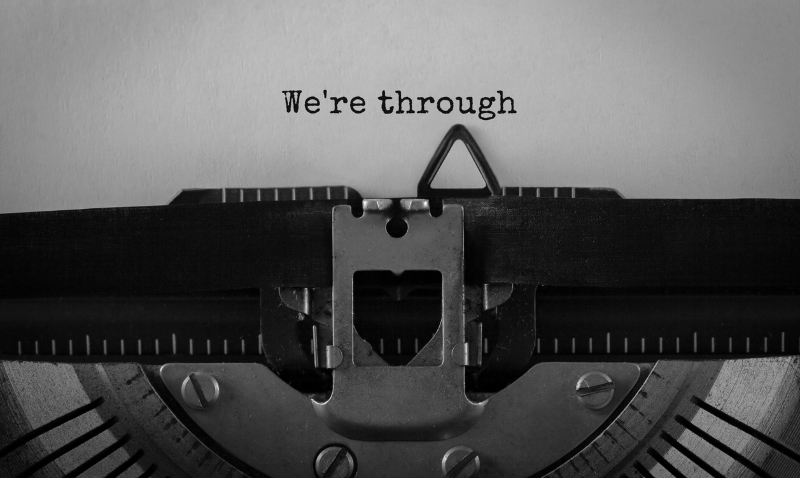 I didn’t see this coming, but then again, I’m autistic and there are some things that I can’t see coming from a mile away. Apparently, this was one of them.

She told me she did it because for the previous month I had wanted to, but I didn’t. Though if she felt that way, I must have been showing signs that I wanted to.

Sure, there was some tension between us, and, according to her, I was showing frustration at the tension. To be fair, so was she. But that doesn’t mean I wanted to break up with her. After all, she was my best friend.

She had been my best friend for several months before we started dating and that continued for the whole time we dated. She was the love of my life, and by her account, for many months, I was hers as well.

We could talk about a vast array of things, would help each other through problems, laugh with each other, cry, and just enjoy each other’s company. Where I was weak, she was strong and vice versa. It truly was a remarkable pairing and a true partnership.

Sure, like any other couple we had moments during our relationship where we weren’t especially proud of something we did or said, but we always figured a way through it and forgave the other. At least we did until that last month.

The sad thing is that as good as we were when we were friends and when we were dating, we’ve been just as horrible since. Looking back at the texts and emails between us since the breakup, we’ve both been mean, each has hit the other below the belt and said things we’re not proud of. At least, I’ve said things I’m not proud of and knowing her, I would guess that some of the things she’s said and written are things she’s not especially proud of as well. But that’s just a guess.

Tonight, I sat and read through just about every email and text that we’ve exchanged since the breakup and I cried. A lot. I cried about some of the things she said because they hurt, but mostly I cried at what I wrote and what I texted. I don’t remember all the phone conversations (thank God) but many of the ones I did remember made me cry at the things I said to my best friend

The truth is, after sitting, crying, and thinking. A lot. She still is my best friend. She has to be.

Every time I have something I want to discuss, get an opinion on, or when I feel lonely and just want to talk, she’s the first, and only, person, that pops into my head.

But I don’t because I can’t.

I’m not proud of the things I said or the way I’ve acted since our breakup, but I’m not too proud to say that I acted like a total ass and that I wish there was some way that I could take it all back. But there’s not and that’s something that I’m going to have to live with for the rest of my life.

After I wrote the original version of this I emailed her a copy so she would have a heads up and called her to apologize.  The phone went straight to voicemail, so I texted to have her check her email and to let her know I wanted to talk for a few.  I never received that call, but the next morning I awoke to an email.

The email said thanks for writing it but that I didn’t need to write it for her. If I wanted to apologize, I should just do it to her. That’s what I tried to do with the phone call and text.  What followed was a long paragraph full of mean and hurtful things about me.  This made me wonder if I had really lost my best friend or if what I had really lost was the illusion of my best friend that I had been keeping alive in my mind. My guess is that it was the latter.

The reason I wrote this wasn’t for her.  Not at all.  I wrote it for all of you so that you can learn from my mistakes and not have to live with the pain of hurting someone.  The same pain that I have to live with.  I wish she could see that.

When you get into a situation where you have to end a relationship, or if you’re like me and you’re on the receiving end of things I urge you to do something. Hit pause. Take a moment and think about how the things you do and the things you say today will affect you down the road.

Will they keep you up at night like mine do or can you put your head on the pillow knowing you handled things the right way? Do the right thing and be able to live the rest of your life without any regrets over the aftermath of that moment.