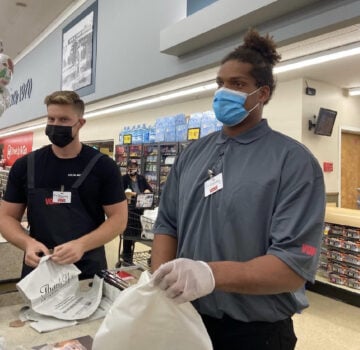 With the holidays coming up and the year coming to end, the season of giving is upon us.

Local Human, the non-profit apparel company founded by Los Angeles Chargers defensive end Isaac Rochell and his friend and neighbor Trevor Beck, is getting in the spirit of the season with its Five Weeks of Giving Campaign, a series of community programs Rochell has planned between now and the end of the year. But giving back and paying it forward is the daily work of Local Human, no matter the season, and it’s been doing this work, supporting a variety of causes, over the past seven months since its founding.

Local Human is an apparel line founded on the premise of giving back. Every single dollar of proceeds generated by Local Human from t-shirt sales is inserted back into the community – into a variety of causes – through the Do Good Foundation. Isaac describes Local Human as “‘facilitators of giving’: you buy a shirt, we donate the money.”

The idea for Local Human was born out of conversations that Rochell and Beck had in their local dog park during quarantine:

My co-founder, Trevor Beck, lives in my apartment complex and we spent a lot of time in quarantine at the dog park – I had just gotten a dog – we had all these dog park conversations turned into a realization that we are really fortunate in that we are not stressed financially and not in the most at risk demographic, so since we are in a good place and we should give back.

One of the organization’s unique strengths is that it isn’t tied to any one cause; rather, as Rochell explains, it flexibly supports a number of different causes with the money they raise from t-shirt sales through different campaigns:

Needs change at different times of the year. We want to be able to do as many different impactful things as possible. And it’s been really cool for us to not be tied down to any one specific cause. Even though its a little more work for us, it’s been really rewarding.

Additionally, as part of their layered approach to giving, every time one of their shirts is purchased, Local Human will in turn donate a shirt to a local California foster center:

We follow the “one for one” model. So for every shirt we sell, we also donate a shirt to a foster center here in Orange Country called Orangewood. When we started Local Human, we wanted to donate money but we also wanted to donate time. So we ended up volunteering at Orangewood Foster Center. They were explaining how they only take new clothes for donations, because foster youths deserve to put on a new shirt. And that hit us super hard. So we decided to put the one model in place to donate new clothes. Everything we have done has been really organic, and that aspect is just another layer of that. 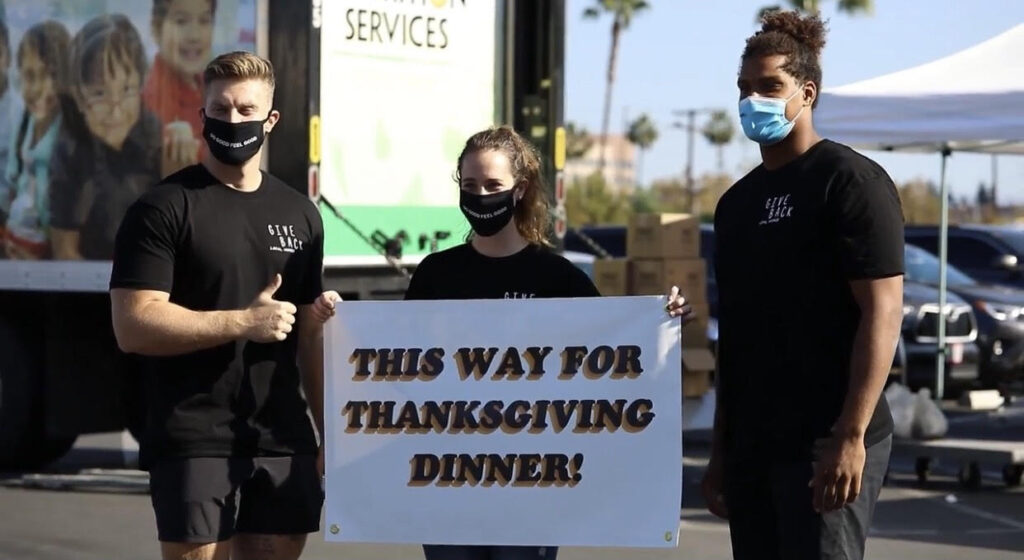 The duo worked with the Santa Ana Unified School District to identify in-need families this holiday season and offered them Thanksgiving meals – turkey, sides, and dessert – via an all-day drive-through pick-up at Robert A. Villa Fundamental Intermediate School. Volunteers followed all local and CDC health and safety protocols and placed groceries into the trunk of each family’s vehicle.

Last week, on Giving Tuesday, Rochell and Local Human surprised shoppers at a Von’s Grocery Store in Garden Grove, Calif. (Orange County) by paying for their groceries in the spirit of Giving Tuesday and the holiday season.

Rochell came over the loudspeaker to make the announcement and purchased $5,000 worth of groceries for the approximately 45 families who were shopping at the time. Wearing a “Mr. Giveaway” name tag, Rochell manned the bagging at check-out, and then Local Human picked up the tab.

For this week’s initiative, which was just announced, Local Human will be partnering with Starbucks and Lowe’s to give away 150 Christmas Trees to a group of low-income families in the Watts area of greater Los Angeles.

More is planned for the coming weeks. 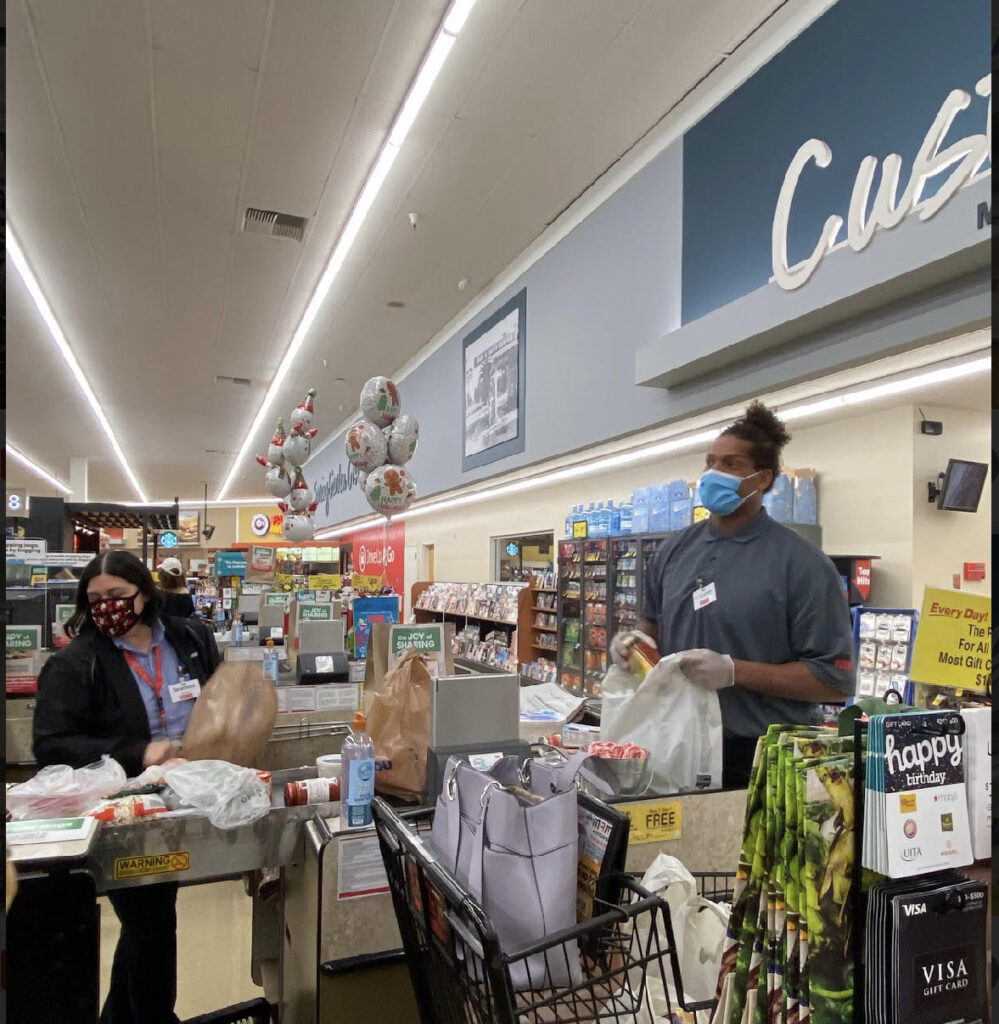 Raising money to support these types of community-based campaigns is not just a seasonal endeavor for Local Human.

It’s what they do year-round.

The causes that they have supported this year range from food insecurity to those focused on communities dually impacted by the ongoing COVID pandemic and racial justice issues. They include Meals-on-Wheels, No Kid Hungry, LA County Food Bank, Campaign Zero (legislation against police brutality), the United Negro College Fund (access to higher education), and the National Fair Housing Alliance (combatting redlining).

“We started Local Human seven months ago, and started selling t-shirts. After our first t-shirt campaign, in our first month, we ended up using the proceeds to donate 1500 meals to Meals-on-Wheels. Today, we are up to over $50,000 donated. We have done some really cool things, like the Thanksgiving food drive a few weeks ago in which we fed over 400 families Thanksgiving dinner.  A couple of days ago we gave out $5000 of groceries to people in the community. And we’re going to keep going – we’ve got other cool plans and we’re fired up about it. What began as almost a hobby has turned into a legitimate organized business that’s doing a lot of great things.”

For Isaac Rochell, using his passion, his platform and his power to change the world for the good is part of who he is. 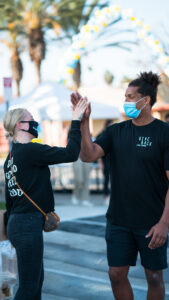 While he is a young man who has a demanding “day job,” as a defensive end on the LA Chargers, he considers these efforts to give back to be part and parcel of his everyday work:

I see giving back and making an impact as part of my day job, which is football. When I’m not on the field, I spent time watching film and I also spend time responding to emails.

He is proud to part of a generation that he describes as “ruthless” but in a good way:

I always say, kind of jokingly, that Millennials are ruthless.  And they’re super passionate. I always think about TikTok and how fast its grown. We see it with the BLM movement – we see individuals who are really passionate and pushing their agenda. And there is a wave of companies and individuals who are really focused on philanthropic actions. A lot of that stems from Millennials being open-minded and passionate.

And he credits having a great, hard-working partner in the endeavor, Trevor, with “giving me so much opportunity to chase this dream of making a massive impact, while playing in the NFL.”

LA Chargers DE Isaac Rochell and his business partner Trevor Beck launched Local Human earlier this year as an apparel line founded on the premise of giving back. 100% of proceeds generated by Local Human are inserted back into the community through the Do Good Foundation. Additionally, every time one of their shirts is purchased, Local Human will in turn donate a shirt to a local California foster center.