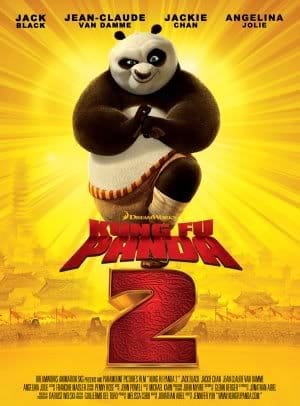 —
In “Kung Fu Panda 2” after an exquisite Wushu display, Shifu (voiced by venerable and irreverent Dustin Hoffman) says to student Po (Jack Black), “Anything is possible, when you have inner peace.” This belies a certain authenticity. The Founder of Aikido said, “True victory is victory over oneself.” At the narrative arc, sage Soothsayer, voiced with eloquent gravitas by the amazing Michelle Yeoh, instructs the Kung fu Panda Po, “Let it flow.” She tells him to let go of his painful stories of the past. In doing so, he has nothing, and everything is possible. She reminds Po that all he has is right now, and the rest of his life. “Kung Fu Panda 2” is whimsically funny in the unexpectedly transformational journey.

The story by Jonathan Aibel, Glenn Berger, and Robert Koo enhances the original “Kung Fu Panda”. First time Director Jennifer Yuh Nelson captures the essence of the martial arts path from ingenious angles without significance—a smart thing. She seamlessly fuses kung fu choreography and the spirit of the way in “Kung Fu Panda 2”. I did not see the movie in 3D, though it is visually breathtaking. We see serene mist covered mountain forests, austere castles, and elegantly crafted pagodas.

In the movie’s preface, Soothsayer (Yeoh) narrates the story of the ruling Peacock Clan in ancient China. The heir to the Kingdom is the arrogant Shen (ominously dark and wounded Gary Oldman). Prophesy foretells of his defeat by the Black and White chosen one. In a Machiavellian attempt to alter his fate, Shen orders the genocide of the Panda. Abhorred by the bloody actions of their son, Shen’s parents banish him from the Kingdom. Shen vows vengeance. But has Shen truly altered fate?

As no surprise and the source of irony in “Kung Fu Panda” Mr. Ping (wise and funny James Hong) reveals to Po that he was adopted, somewhat. Given that Mr. Ping is a goose, not a real “aha” moment. So Po must discover who he is, physically and spiritually.

Since Po became the Dragon Warrior, profoundly getting that there is no great secret, he leads the Furious Five against all evil doers. However, Po still seems a bit of a goof, not really the Kung fu Master. This may just be the clumsy charm of Jack Black’s embodiment. Strong and slender Tigress (sublimely confident Angelina Jolie) is clearly the powerful martial artist. She in fact schools Po in her prowess on occasion. We begin to wonder if, Tigress was really the chosen one, not Po. Jolie is subtle in dialing down Tigress’s arrogance and impatience with her leader. “Kung Fu Panda 2” works in the compassionate partnership of Black and Jolie, and the evil force of Oldman as the merciless Shen. Other members of the Furious Five appear relegated to the background this time around.

In this story, Shen has created a massively powerful weapon that may vanquish Kung fu. So Po must end Shen’s path of vengeance and domination. More importantly, Po must discover who he is and find the peace within. Yeoh as Soothsayer is impeccable eloquence assuming the helm for Shifu (Hoffman) as Po’s guide in his transformation into mastery. Black is surprising in balancing humility, gravity, and whimsy. “Kung Fu Panda 2” is hilarious, and state of the art CGI animation. What really inspire are the performances of Yeoh and Black, in the story of the hero reconciling the world and finding peace. “Kung Fu Panda 2” gets it right in this noblest of pursuits.
—

Facebook2Tweet2Pin2EmailShares6
wpDiscuz
0
0
Would love your thoughts, please comment.x
()
x
| Reply
Share this ArticleLike this article? Email it to a friend!
Email sent!