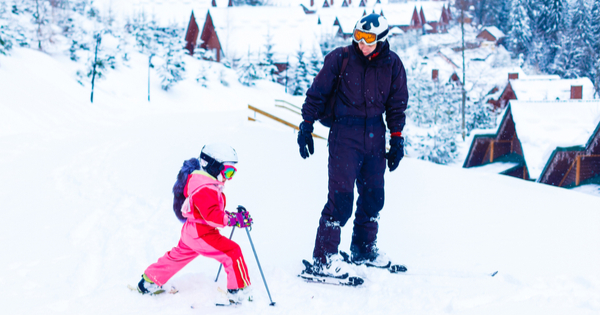 Ski holidays are weird. I say this as a huge fan but one who converted late in life, and so I take it all on with fresh eyes, not having grown up with this as normal. And yet, they are a great way to bond with your children, as I experienced with my 4 and 6-year-old daughters.

First of all, the whole process is expensive. The necessary equipment–warm jacket and snow pants, ski boots, skis, poles, helmet and goggles, insulating long underwear, oversized socks, gloves—it all costs hundreds or more, and that’s before you even set foot on a slope. Then ski passes–which pay not to ski but to use the chairlifts and gondolas that allow you to ski down without having to hike back up–can cost 50 or more a day in Europe, over 100 in the US and Canada.

And what’s the process? First the gondola. You stand with strangers in a metal box that carries you, precariously balanced and prone to swaying in a stiff breeze, up to the top of a mountain.

Then you carry your unwieldy and heavy equipment, all the while hoping you don’t have to go pee again, because it’s an opera, when you have many layers and snow pants on, out to a chairlift. The chairlift part is great, as long as you’re cool with heights and bumps and being wind-blown and are nimble enough to push yourself off at the correct moment, so the lift doesn’t drag you back down the mountain.

Then you throw yourself down a ludicrously steep slope, obliged to lean forward down into the fall, against all logic and your body which keeps screaming “Lean back! For the love of God, lean back!” If you obey your millions of years of animal instinct then you will fall on, and then down, said slope, quite possibly suffering a serious injury. Then, once down at the bottom, you get into the chairlift and head back up again. It’s Sisyphus, if Sisyphus really enjoyed the downhill part of his repetitive, seemingly senseless labor.

But it is fun, especially a holiday staying atop a mountain. Of course, getting to the top is fiddly, especially if you’re like me, with young kids in tow who need to be guided and cared for and bribed and encouraged and occasionally carried. It takes a few years of “work” holidays to get young kids solid enough on skis to be able to ski as a family–my girls are 4 and 6 and were not quite there yet at the start of our recent holiday –so we’ve had a few years of “getting the kids into it” ski holidays. These involve very little free skiing for mom and dad.

But for me, skiing is just one component of the totality of the ski holiday and I still love it. Especially with my girls.

This trip I’m at Vogel ski resort, a mountain about Lake Bohinj in northern Slovenia, about an hour from my adopted home. I’m testing skis for Elan, the storied Slovenian ski company that invented carving skis, the current standard format of ski that makes turning far easier and which revolutionized the sport. That sounds far more glamorous than it is.

I’m a lousy skier, mediocre at best. Speed and steep slopes are my nemeses. Give me a wide, gentle, slow ride and I’m happy. I enjoy blue trails, can handle red and wouldn’t touch a black trail with a ten-foot ski pole.

I’m almost forty and only learned to ski a few years back. My parents don’t ski, so I never did as a child. A friend got married in Gstaad about ten years ago and I figured there was no better opportunity to try to learn, since my wife (a fine skier since childhood) and I would be in one of the most famous ski resort towns in the world. I tried snowboarding first because, frankly, it looks much cooler. It is just about impossible to look cool skiing, whereas snowboarders really look like they’re having a good time and are far more relaxed. In preparation for my first lesson, I borrowed my friend’s couch pillow and stuffed it down my pants, to cushion my inevitable fall on my butt.

It didn’t help. Snowboarding was far too difficult for me, someone who looks at a skateboarder falls over. I am not very coordinated and so anticipated that this would be extremely difficult. Turns out skiing was far easier. I picked it up relatively quickly to get to a functional, if awkward and stiff, level.

While you’d normally think of ace professional skiers as the sort of people to test out skis, it actually makes sense for someone like me to do so. I am much more the profile of most consumers early on in their ski careers. And I’m not about to try testing some high-level race ski, but Elan has an introductory level ski called Element that is meant for children…and adults who ski like children. That would be me.

But actually skiing is just one of many components of a skiing holiday. I would frankly be happy on a ski holiday even if I didn’t ski at all. As soon as you get to the top of the mountain, it is the equivalent of going to a snowy Disneyworld for families.

First of all, everyone looks weird. I don’t care how expensive or designer your winter outfit is, it is impossible to look cool in the oversized snow pants and jackets. People seem to embrace the un-coolness, wearing ridiculous hats and clunky helmets and crazy goggles. This promotes the sense of holiday carnival.

Checking into a hotel at the top of the mountain (we stayed at the Burja apartment at Vogel) and you find people walking around and taking their meals in long underwear, something you would never see down on Terra Firma. And the ski boots look like some sort of interrogation device for witch trials. They are a real pain to get into and out of, and there’s something medieval and torturous about the latching system, trying to get your foot as tight as possible within the boot, rendering it essentially immobile, as this will give you more control over the ski, but is not everyone’s idea of fun (especially if your foot starts to itch while seated on a chairlift). It’s the podiatric equivalent of claustrophobia.

Yet being outside at the height of the mountaintops and seeing the snow-capped peaks and pillow-like billows of snow glazing everything around you is sublime and majestic. I find it far more inspiring and romantic than a beach holiday. It also feels good at that a holiday is built around sport, so that you are doing a workout and constantly honing your ability as you go. You can ski with others, but the comradery is in the pauses between the action and enjoying the apres-ski activities, like sitting around a fire or warming yourself over cocoa.

Otherwise it is just you and your body gliding over the snow, trying not to die and trying to improve all the while. It feels good at the end of the day. The best part for me is the pauses at mountain huts to enjoy food and drink, with an emphasis on the drink, with family and friends and amazing views and the feeling of satisfaction that you worked hard and sweated all day and now can, without a bad conscience, do absolutely nothing at all for the evening.

Bombardino, a hot eggnog-like liquor shot, and kaiserschmarrn, a sort of chopped pancake with marmalade topping, and beer and homemade schnapps and warming stews and taking your meal while gathered around a traditional tile stove that warms the whole restaurant—this is where it’s at. The alpine interior décor, lined with raw wood, just feels like a home away from home.

This sense of sporty escapism and bonding in “survival” is great for bringing together families. But for me, skiing with my very young daughters, was also enlightening. Little kids are fearless and rubbery on the slopes. My 4-year-old had two one-hour lessons on the kiddie slope before, to my surprise, the teacher took her onto a big, proper grownup slope. By the end of the third hour, she was carving with beautiful form, and my wife and 6-year-old joined her, able to actually ski together far more quickly than I anticipated.

I saw the success my girls had with the teachers at the Finzgar Ski School at Vogel, and decided to take another lesson. I also tried copying my 4-year-old’s technique, and realized that, while I was skiing functionally and enjoying myself, I was already not skiing properly. My Element skis were responsible for this, and here they are a mixed blessing. My teacher pointed out that the skis were so good, so well-engineered, that they allowed me to ski without correct form, but with function.

My goal on a ski holiday is to have fun, and so it’s not a problem for me to ski with less-than-ideal form. And there is no greater pride and pleasure than in seeing your tiny children carving up the slopes with beautiful form. Then, when the cumbersome and un-hip ski gear comes off, the bonding only continues, with Bombardinos for mom and dad and cocoa for the kids before a fire in the heart of the Alps.

We already booked for next year.

Noah Charney is an internationally best-selling author and professor of art history, specializing in art crime. He lives in Slovenia (believe it or not). Visit him at noahcharney.com. His latest project is a limited-edition parenting book + app trending on Kickstarter.