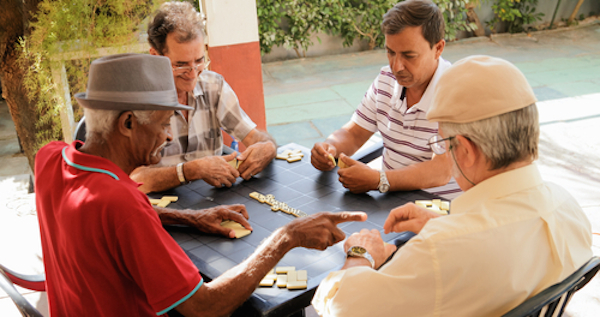 It’s hard to define “old”, but you know it when you see it, as in the guy with the grey hair in the car in front of you who is not going to make the left turn unless he has a mile of open space, so you yell, “Hey old man! Kick that pig!” Which he ignores…

That’s ageist. I know it. Even as I said it I knew it was ageist, but I still yelled it, but I regretted it, not because of that particular old goat, who needs to be a bit braver when it comes to left turns, but because of the way this guy, Old Bill, is treated at the office.

Old Bill is a sales guy in his mid-60s. He’s a decent salesman, and his numbers match anyone in the office, but he’s different from the rest of the crew…how, you ask? Mostly because of his out-of-date frame of reference. He talks about CHIPS like it’s still on TV, and he’ll tell you that the Stones are the greatest rock band ever, though most of the other guys grew up on Tears For Fears; he’s never been in a Chipotle, and vaping? It just confuses him. He talks about “gals”, and doesn’t like how baseball players wear long pants.

Well, one night I see him at the Crow’s Nest, my bar of choice, and he’s drinking a beer with a few other guys, all about his age. I panic–I came in there to have a beer and to interact with one other person–the bartender, and I certainly didn’t want to hang out with a bunch of coots, so I did a quick spin, with the intent of fleeing, but Old Bill saw me and called me over to the table.

Reluctantly, I went over. My brain went into overdrive trying to think up an excuse that I could toss out that wouldn’t feel too fake and free me from the agony of conversing with them, but nothing I concocted sounded anywhere near plausible, so I found myself having a Budweiser with Old Bill and his band of merry oldsters.

Well, guess what? I sat there for nearly four hours. Those old dudes were funny, pithy, smart, reflective, intuitive, and just downright cool as shit. They did have an odd-wad frame of reference, but you know what? Everything old is new…they had seen more, experienced more, lived more than I–if I brought up Trump they could compare him to Nixon–because they’d been in college during Watergate. If I talked about the sustatinability of a Prius, they talked about the ’68 Malibu SS 396 that didn’t save a lick of gas but were more fun to drive. And sex? Oh, Lord, it was fun to watch Old Bill’s eyes light up while he recounted a romantic evening at the old Star-Lite Drive-In…

You have to see past the wrinkles, and the age spots, and the bifocals, because these guys are old, but they have LIVED–they’ve made every bonehead mistake possible, from idiotic financial mistakes to work miscues to romantic gaffes, and lived through it, and that makes them smart.

I decided that I wanted to tap into that knowledge. This is knowledge from the Gods.

You should as well…but you have to dig a little to get it.

This week you have to hang out with an older man. Not older like one year, or a guy who was a senior when you were a freshman, but a real senior–someone over 65 years old. It can be a random guy–I mean, you can go to the nearest retirement village, or down to the park where the old guys play backgammon–but if you can, do some research and try to find a man from whom you might learn something.

Like a guy who did your job but has retired. Or a successful businessman that your dad knows, or the crossing guard who wears a Vietnam Veterans hat.

And you can’t use your own father, or step-father, or anyone related to you.

And when you’ve reached out to the guy, make an effort to spend some real time with them. Do what THEY want to do. That’s important. Don’t foist your lifestyle on them. Dive into theirs. Maybe it’s the early bird dinner at Denny’s, or a round of golf, or canasta with the boys, or fishing, or off to the library, or just a sit down in the city park where they feed the pigeons.

PREPARE for the meeting. Write up some questions. Let them talk and LISTEN to them.

Then go back home and write down what you learned, if anything.

END_OF_DOCUMENT_TOKEN_TO_BE_REPLACED

Facebook4TweetPinEmail1Shares5
wpDiscuz
Share this ArticleLike this article? Email it to a friend!
Email sent!