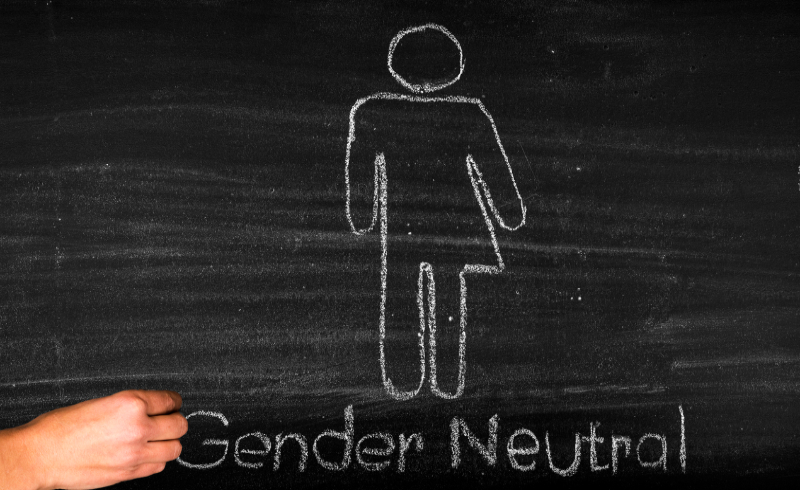 To the transgender kids, their parents, to the lawmakers, the bigots… My love does not discriminate.

Six months ago, on the eve of his 16th birthday, my son told me he was transgender. Of course, it wasn’t quite as simple as that. He had become very quiet, very withdrawn. It was obvious he was deeply unhappy about something. I had asked him several times what was bothering him and he just said he wasn’t ready to talk about it yet. Until that night. I was going in to say goodnight and he told me he was ready to talk but he was worried that once I knew I wouldn’t love him anymore. I held his hand. “Of course I will” I said. “My love is unconditional. Well, not totally unconditional. If you’ve killed someone, I’d probably struggle a bit …”

So he told me how he felt unhappy with parts of his body. “All teenagers feel that way” I assured him. But this was something more. Slowly he revealed to me how he identified as female. I kept reassuring him of my love, tucked him in, went upstairs to my own bed and cried. It was something I didn’t really want to deal with. I didn’t have the strength. Or so I thought.

It turns out I did have the strength. And it was easier than I had anticipated as bit by bit my miserable son turned into my blossoming daughter. She started wearing girls’ clothes at home. We told those closest to us and we swapped pronouns. My daughter taught me about gender dysphoria and for the first time in my life I considered what it must feel like when the outside doesn’t fit with the inside. Specifically, I considered how I would feel if I had a penis and testicles hanging off the front of MY body, how out of place that would feel and how I would then feel about myself. And then I got it. I didn’t need to question anything else. I didn’t need to go back and rethink every little comment, or replay scenes from her childhood looking for clues I might have missed. My baby, this beautiful thing I created with my own body, who I labored to bring into this world, who I nurtured and love with a power beyond life and death, my beautiful baby was asking for help, for acceptance and for the right to be who she is. It is my utmost pleasure to provide that for her.

For me, it really is as simple as that. A friend recently asked me, “Why are you not doing more crying and moaning about this?” The answer is, I really don’t have anything to moan about. My child is getting happier every day. Without exception, everyone I have told has been positive and accepting. Her school (a very traditional boys only school) is being amazingly supportive. When she came out to her whole year group at a special assembly there was a spontaneous round of applause and lots of handshakes (very British). Plans are already in place for the next school year. She has use of single cubicle toilets, she’ll be marked on the register as female and will stay in a single room on school trips. In terms of logistics, it’s really not very difficult, so I just can’t understand the big brouhaha going on in the US at the moment over where transgender people, or as I like to call them, people, go to the toilet.

I’m not going to go over the same arguments being waged on Facebook accounts and news programmes all over the US of A. There’s simply no need. What is needed is for America to look itself in the eye, give itself a slap in the chops, and wake up to see the bigger picture. In Europe right now, we are not bothered about where people take a crap, instead, we’re thinking about where people are going to live. We’re dealing with a migrant crisis on an unprecedented scale. We are wondering where thousands of orphaned refugee children are going to find loving homes. We’re talking about BRexit and Britain’s future in Europe. We look on in disbelief as the possibility of President Trump becomes a reality. We’re Tweeting about London electing its first Muslim Mayor, remembering the tragedy of Hillsborough, and reeling in the real truth of what happened on that football pitch 27 years ago. We’re signing petitions (because that’s how we handle our outrage) at the loss of a BBC recipe website. What we are not concerned about is toilets and who uses what. And you guys should really be asking yourself why that is.

Over here toilets are something to be laughed about, not fought over. You see, we love toilet humor and laugh at the way we behave in such a private public space. We don’t make eye contact with other people when using the facilities. We don’t want to look at them, or talk to them, or worst of all, let them hear the noises we make in the cubicle. We don’t want to wash our hands at the sink next to another person, or use the same hand drier. We would rather walk out with wet hands than stand awkwardly next to a stranger for 30 seconds. So there’s not really much of a chance that we’d be making judgement calls about the gender identity of other toilet users. We certainly wouldn’t loiter long enough to form thoughts about it, and even if we did, we’re far too polite to do anything about it. In short, we don’t care who uses what toilet as long as they don’t overhear our botty trumpet.

Making laws forcing transgender people to use a certain bathroom is laughable, aside from the fact it is actually happening. But here’s the thing. You don’t need laws about it. You just need to apply some common sense. You can’t legislate against transgender people any more than you can legislate against gay people or female people or black people. Not if you live in a progressive and free society. Because before each one of those was assigned a label based on gender or sexuality or skin color they were and always will be just people. People. But at the same time you can’t force a bigot to grow a social conscience and they are allowed the freedom of choice just the same as anyone else. So if they choose not to use a public bathroom because of the risk of other people, that is their choice. And with any luck there’ll be a single cubicle, possibly designated for disabled use, that will be available for them should the need arise. Just so long as disabled people don’t start asking for legislation to stop bigots from using their bathrooms.

My daughter, my brave, beautiful, talented, loving daughter is not a boy who has chosen to become a girl. She has always been female. We just haven’t always been able to see it. We raised her as a boy because that was what she looked like on the outside. Now we know better. Some parents of transgender kids feel a real sense of loss when their child transitions from one gender to another. I felt that the first night she told me. I lay there in my bed and grieved for the man I hoped my boy was going to become. I grieved for the life I hoped he would lead. But since then those feelings have diminished. I understand now that gender is not a binary issue. My child was not, is not, a boy who became a girl. My child is just my child; defined not by hormones or genitalia. She is defined by the content of her heart and the thoughts in her head. She is defined by those who love her and those who she loves in return. She is defined by her actions and achievements, by her potential for life and joy. She is my child.

I wanted to share this story. I needed to share this story. I want those fighting over toilets to see the human face behind it. You are fighting over people. Real flesh and blood people who hurt and bleed and feel just like the rest of us. They are our children. Our babies. Our world. I want to share the love I have for my daughter and hope that this love, this pure unadulterated force for good can travel across the invisible divide and reach out through the screens of laptops and mobiles wherever it is needed. To the transgender kids, their parents, to the lawmakers, the bigots… My love does not discriminate. It is more powerful than any hate, it is more powerful than any laws about toilets.

Limpet Girl is a 40 something single parent clinging to a rock somewhere between England and France. It's called Guernsey, where the cows come from. Find her on Facebook at https://www.facebook.com/pages/Limpet-Girl/163069693882564 or go straight to her blogwww.limpetgirl.blogspot.com - See more at: https://goodmenproject.com/featured-content/love-toilets-transgender-daughter-dg/#sthash.f59sfnZS.dpuf

Although I appreciate that you support your daughter (parents supporting trans kids is always a good thing) – I kind of take issue with your tone regarding the issue. No – there shouldn’t be bans on trans people in restrooms. But there are. And our solutions are not going to be your solutions – why? Because we seceded from the British. We are not European – our roots are puritanical. Our ancestors left because the climate in Europe was simply not strict enough. I know this probably isn’t making a whole lot of sense – I just found the tone… Read more »

It’s great that you’re both happy but you need to understand that people are going to have individual and valid views on the subject. Censoring people’s views is the exact opposite of freedom of speech – it works both ways.

Your son is a boy. This is not an opinion it is a fact. He was born a boy and no matter how much he believes he is a girl he is still a boy. What you are doing is not forward thinking, it’s incorrect thinking.

No. You’re wrong. Very wrong. You may certainly have an an opinion but an uneducated opinion has absolutely no value, to you or anyone else. So go get some about this issue and then come back and resume the discussion. In the meantime I might suggest you refrain from voicing said opinion until some study has been conducted. Lest you illuminate the probably incorrect idea that you might not be a very bright fellow.

Go Limpetgirl and Limpetdaughter! As a fellow Guern, I’m happily encouraged by the school’s reaction and hope that the rest of the island is becoming more inclusive and forward thinking.

Perhaps you should update your “About the Author”

FacebookTweetPinEmailShares886
wpDiscuz
6
0
Would love your thoughts, please comment.x
()
x
| Reply
Share this ArticleLike this article? Email it to a friend!
Email sent!