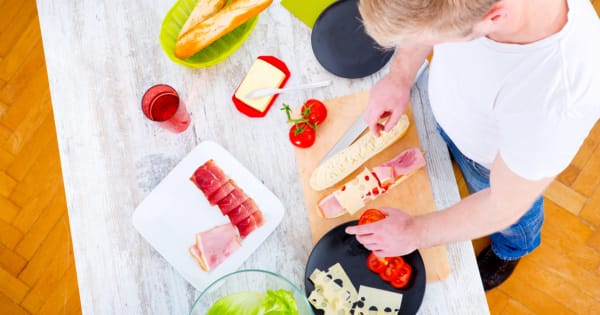 —
About eight years ago when I was still working a fulltime job, a co-worker complained to me that whenever her husband wanted a sandwich, he would pester her to make it for him. She assured me that he was physically and mentally capable of preparing his own sandwich, but he claimed that her sandwiches were much better than his. She wasn’t a master at sandwich making so she wasn’t fooled by his flattery. She knew that he avoided any kind of food preparation because in his mind real men didn’t cook. That was women’s work.

The idea that domestic chores like cooking, cleaning, and laundry were women’s work that real men were not expected to do and were often incapable of performing such chores was such a tired old stereotype that I found it surprising that any man who still believed it. But there was my co-worker’s husband determined to maintain the status quo. To make the situation even more absurd, she was the one with the fulltime job and he only worked part-time. She was the main financial provider and worked the longest hours, yet he expected them to continue acting out their outdated roles.

I witnessed the same behavior from my mother-in-law’s boyfriend. He was retired while she was a magazine editor. Though this man had been a merchant marine and a union negotiator, he was incapable of feeding himself. Well, almost incapable. He made bologna on raisin bread sandwiches. That was all he ever made. Either he really liked the disgusting combination of flavors or he did this in the hope that it would make my mother-in-law feel sorry for him because he had no idea how to make a decent sandwich. Along with being incapable of making a decent sandwich, he expected her home by a certain time every day to prepare supper and would complain if she was late. Again, she was the one with the career. He was the one at home sitting on his ass eating a pitiful bologna on raisin bread sandwich.

My mother-in-law’s boyfriend was born in the 1920s. He was of the generation where men worked and women cooked, which almost made his behavior forgivable, except my father was of the same generation and he was capable of making a damn good sandwich and did so even when my mother was around and could have easily made one for him.

My father was a dentist and my mother stayed home and took care of the children. There were times when my father did make dinner, but it was never anything as elaborate as my mother’s cooking. He made excellent salami and eggs and decent matzah brei, which was basically Passover French Toast. My father was good with eggs.

He also did the dishes every night after my mother cooked. My father was not hen-pecked into doing this by my mother. At some point, they had agreed to this division of labor. Watching my father cook and clean made it clear to me that domestic chores weren’t specifically women’s work. They were adult work. They were the actions adults engaged in to maintain a decent home.

From other conversations I had with my co-worker, I knew that her husband’s mother didn’t allow him to cook or clean. He was her prince and she took care of him. Before he was married, whenever he came home to visit, the first thing his mother did after taking his bag of dirty laundry was to insist on making him a sandwich. It was a show of love but also a way of maintaining a hold on his youth because if her son were to really grow up, then he wouldn’t need his mommy to take care of him anymore and she would lose her special bond with him. All very touching I suppose but by teaching him to view domestic chores as unmanly, what she really taught him was to remain a child. Children can’t take care of themselves. Any adult male (no matter what age he is) who can’t do domestic chores and refuses to make a sandwich is still a boy.

All through college and for a few years after, I had male roommates and we lived like we were raised in a barn. To be fair, I knew plenty of women who were just as terrible. Though my parents didn’t see any problem with men cooking and cleaning, they didn’t teach me how to do either. Since my roommates didn’t bother to cook or clean, I didn’t feel compelled to do it.

Eventually, I was able to afford to live alone which made it possible for me to decide how I wanted to live. I didn’t want to eat take-out food in a dirty apartment. I wanted to cook a decent meal and eat it in a clean and tidy apartment. My sister bought a new Betty Crocker Cookbook and gave me her old one. From that book, I learned to cook. I figured out the cleaning on my own. Soon after that I discovered that I didn’t need a fancy sports car or a lot of money to impress a woman. I just needed to invite her over to my place for a home-cooked meal. If the food alone didn’t seduce her then the clean bathroom always ensured that she spent the night with me on my laundered sheets.

I recently celebrated my 20th wedding anniversary. I can’t say that I seduced my wife with a clean bathroom, but it helped. She saw that I was an adult and she didn’t have to take care of me. For years, she did the cooking and I did the dishes. She got stuck with the cooking because she was a picky eater. We hired a housecleaner to do the cleaning. Recently, I began to work at home while she continued to commute to work. It didn’t make sense to us for her to have to come home and cook dinner if I was already there. So, now I do the cooking which meant learning how to cook for a picky eater. And she does the dishes.

In my novel, American Judas, I made a point of showing that the main character, Seth, was an equal partner to his wife Maggie. They both cooked and he was even better at preparing traditional Jewish dishes than her. I wanted Seth to be a modern man trapped in a repressive society which seemed like a disadvantage until he and Maggie were forced to escape this world. Their equal standing increased their chances of survival.
Whether he’s married or not, learning to cook and clean will increase a man’s chances of survival. We no longer live in a world where the man went to work, and the wife stayed home. In today’s economy, everyone has to go to work. Everyone has to make their own damn sandwich. Men can’t afford the luxury of being perpetual boys anymore. They have to grow up with the rest of us.

Mickey Dubrow has been an award winning television promotions writer/producer for major cable networks for over twenty years. His essays have appeared in Creative Loafing, The Atlanta Jewish Times, Prime Number Magazine, and McSweeney’s Internet Tendency. Under the pen name, Allan Kemp, he is the author of the Black Phoenix urban fantasy series.

Facebook80TweetPinEmailShares80
wpDiscuz
Share this ArticleLike this article? Email it to a friend!
Email sent!