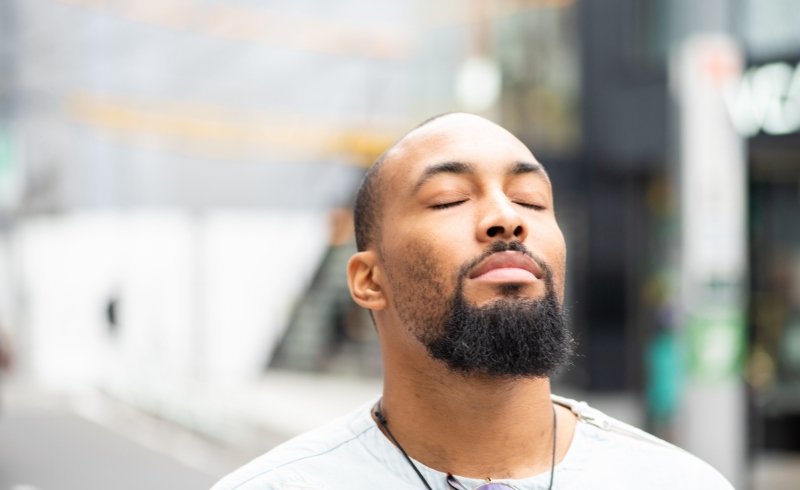 It was news that was unbelievable. It was unspoken but we could see it on the face of the ultrasound technician before she uttered a word.

It was around seven years ago—we hadn’t planned the pregnancy but once we found out that my partner at the time was pregnant, we could not be happier. The morning came for us to go for the three-month scan and the peak of happiness quickly turned into one of the most testing times of my life.

As she looked up, the technician told us that, unfortunately, the pregnancy had become unviable and our child had died.
I remember feeling numb at the news—it wasn’t real, it couldn’t be true.

That numbness very quickly changed into a sense of helplessness.

I’m a man, there must be a way to fix this? I must be able to do something, but what could I do?

The journey home was unbearable, with the first 10 minutes being in an uncomfortable silence. I had to step up, I had to be strong. I did what I thought was right.

I broke the silence and uttered a few words: “It will be OK. We can get through this but today is all about you. Whatever you want, that’s what we will do. Just let me know what I can do for you”.

The nightmare continued as my partner had to endure procedures to remove any remanence of our child. All I could do was wait patiently, be strong and supportive. Be a man.

I didn’t know how to “fix this,” I just knew I had to be the way I was. Every ounce of my being told me I couldn’t grieve, not now. I couldn’t be weak, that is the last thing my partner would need.

Making that decision to be a “man” was one of the biggest mistakes of my life.

We had kept the pregnancy quiet, not because we expected any of this to happen, just because that is what you do. Even my parents didn’t know, or so I thought. We had planned to visit them to break the news on the day after the scan. Instead, I made excuses, telling them I felt under the weather and we would come over once I felt better.

My mum began to ask questions… She knew. After all, she had spent her working life as a midwife and told me much later that she had suspected my partner was pregnant a couple of weeks before when we had called round. She didn’t press things, deciding it was best to let me tell them what had happened in my own time. That turned out to be around four months later, after I had bottled everything up as all around me things began to crumble. The events had taken their toll—my relationship initially became even stronger before coming crashing down.

I didn’t so much tell my parents what had happened, it was more a case of them filling in the blanks as I broke down into an undecipherable crying mess on the phone. I hadn’t just lost my child, I had also failed in my pursuit to be a man. To fix the situation, to be the provider and protector of my partner.

That was the turning point. Looking back, I can now see some of the most valuable lessons that life has ever taught me on what being a man is actually all about. Lessons that I could only learn the hard way, by being broken by an horrendous event that would take me years to come to terms with.

Life throws challenges at all of us and, at some point, we will all feel helpless and out of control but that doesn’t have to mean that we have failed as men. We just have to face those challenges in ways that go against the mainstream beliefs of what being a “man” is.

Getting through this darkest period of my life taught me three things that will stick with me for the rest of my life, and stand any man going through tough times in good stead.

3 Gentler Lessons About How To “Be a Man”

Being strong and supportive can only work from a position of strength.

To look after someone else, you first have to look after yourself (or at least be doing so at the same time as looking after them). Support from a position of weakness simply leads to something (you) breaking, at which point you will not be able help at all. Accept the fact that you are just human and, as such, just as vulnerable as anyone else. Pretending otherwise isn’t being strong, it is just foolish.

Being a man isn’t what society would have us believe.

The widely held belief of hiding emotions, being strong and silent is perhaps one of the most damaging and dangerous beliefs we men face today. Being an emotional robot is the complete opposite of being strong—it is hiding away, burying your head in the sand.

Face the demons, accept that you may need help and seek it out. Realise and accept there are some things that will always be out of your control, things that you just can’t fix. That takes real strength, it takes courage and it takes a being a real man.

It takes a man to note his reactions and measure his responses.

Through the dark times, it is very easy to allow everything to spiral out of control. In trying to be strong, it is all too easy to push the people we care about away or to vent our self-perceived inadequacies at the slightest opportunity. Being strong enough to stop the spiral seems almost impossible, but all it takes is for you to realise that you are vulnerable, like a cornered wild animal, and that you need to make a decision…

You need to decide whether this feeling will control how you respond to situations in your everyday life? Once you decide that you don’t want to live that way, you can then begin to practice noting your reactions and measuring your responses.
By its definition, reaction is instantaneous—something happens and you immediately react. In truth, something happens and you quickly (almost, but not quite instantaneously) decide how to react. With practice, you can learn to stop the reaction for just a second, which is long enough to ask yourself: “Do I really want to do this?”

Once you have asked that question, the reaction has normally lost momentum, which then allows you to think about what you want to do next. Will that response aggravate or calm things? Will it improve your current situation or make it worse than it needs to be?

Over time, you will learn how you tend to react, which will afford you the ability to avoid situations that you react badly to in the first place.

Chris is a digital marketing consultant, speaker and writer. His ability to help explain complex strategies in an easy to understand and, more importantly, actionable way has led to him working with large national and multinational corporations – ultimately helping them to gain more customers who spend more, more frequently. To find out more about Chris, go to chrisweatherhead.com or you can connect with him on Facebook.

This is brilliant – well said, deeply felt and dead on target.

Thanks Kris! Glad you enjoyed it.

FacebookTweetPinEmailShares2.7k
We use cookies on our website to give you the most relevant experience by remembering your preferences and repeat visits. By clicking “Accept”, you consent to the use of ALL the cookies.
Do not sell my personal information.
Cookie SettingsAccept
Manage consent