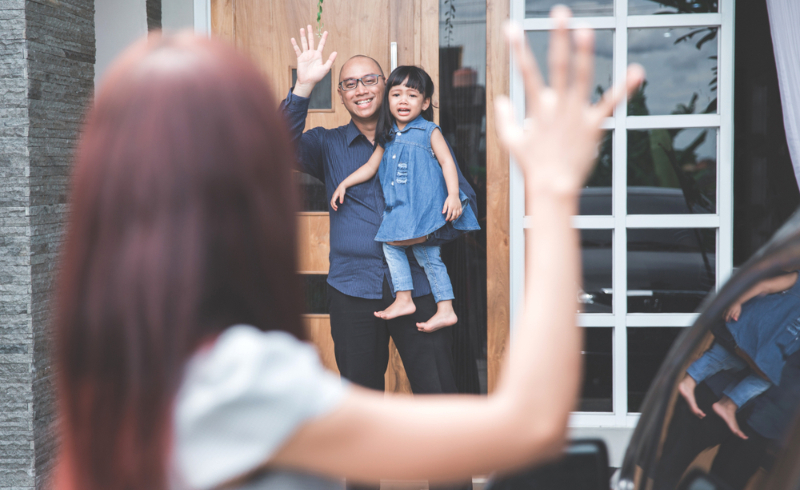 Overwhelmed with nausea, I sit down on one of our kitchen chairs. My fingers fumble with my medication injection pack as I open it, remove one of the cartridges, and insert it into the pen. I suck in air and hold my breath, pressing the pen into my thigh until it indents a circle on my flesh. I wince. Later, a black and blue bruise might replace that indentation. I don’t care.

I push the trigger with my thumb and listen for the soft ‘swish’ as the medication rushes out of the pen. “1, 2, 3, 4, 5,” I mutter. With shaking hands, I hold the pen for a few extra seconds to make sure I got all the medication out. Soon, I might have relief. I breathe again.

“Mommy is fine, don’t worry,” I hear my husband assure our nineteen-month-old son as he is holding him in his arms. Until he spoke, I hadn’t realized they’d walked into the room. I notice my son staring at me, trying to figure out what I’m doing. Normally, I try not to inject in front of him. He’s too young to understand the reason I’m hurting my own leg: I’m desperately trying to abort a migraine.

If my husband hadn’t been here, I wouldn’t have been able to lie down after the injection and rest with the assurance that my son is happy and safe. Within the next twenty minutes, the pain, nausea, and dizziness subside, and I’m a functioning parent again.

Migraines attack about two to three times a week, two of which I can abort with medication. Using an abortive medication more often than that can lead to rebound headaches, which can result in more migraines that are often harder to treat.

When a third migraine strikes in one week, I’m bedridden in a dark room in too much pain to sleep or talk for fifteen or more hours. But when I’m able to inject, relief usually arrives. Unfortunately for many chronic migraine patients, no effective medication exists. Some sufferers have migraines that last for days, and they don’t have a support person to take over their duties during that time.

My husband’s remote job grants him the flexibility to be there when we need him most. Normally, he works all day while I care for our son, but when I’m having a bad migraine day, he is there to take over while I rest. I’m one of the lucky ones.

My son doesn’t know what ‘migraine’ means, and I hope he never experiences one. But he seems to understand what it means when mommy is locked away resting. Lying there in our dark bedroom lost in a static blur of pain, I hear their muffled laughter in the playroom.

My husband reads a book aloud, usually Chicka Chicka Boom Boom or Sammy’s Special Day. I hear giggling and can picture them sitting together on the floor, my husband’s stomach pressed against the rug and my son standing over his shoulder pointing to the illustrations in his picture books. I hear the click of the front door as they leave for walks, returning home hours later, sweaty and eager to share a water bottle.

My husband changes diapers, climbs out of bed late at night, gets up early in the morning, gives baths, serves snacks, reads stories, cooks meals, and shops for groceries. When I first started to need injections, he’d push the trigger for me as I gripped his shoulder in anticipation of the needle prodding my skin.

Traditionally, our culture has assigned a lot of the work my husband does to women. It’s tempting to assume mothers and fathers have achieved such equality that no modern person would view tasks of parenting as emasculating. Since 1989, the number of men who stay home with their children while their wives work has doubled, reflecting a shifting view of what constitutes “motherly” or “fatherly” work.

Unfortunately, most Americans still haven’t accepted that men can rear children as well as women can, even if it’s becoming more commonplace, according to a 2014, PewResearch report.

In April 2016, several news outlets drudged up a 2005 interview in which talk radio hosts Opie and Anthony asked Donald Trump whether he changes diapers. Trump responded by questioning why a man would partake in such a feminine job: “There’s a lot of women out there that demand that the husband act like the wife,” he explains, implying that diaper changing is a task so obviously relegated to “women’s work” that the only reason a man would do it is if he were being forced to do so.

Many parents with chronic pain worry about the effects of their health on their children’s lives, and with good reason. An article in The Atlantic reported:

“The results, published in the Journal of Child and Adolescent Psychiatric Nursing, are, well, painful to read. It turns out that children whose parents experience chronic pain are at increased risk for adjustment problems and behavioral issues, and are more likely to complain of pain themselves. The whole family suffers. some studies have shown that children are at higher risk for chronic pain and behavioral problems.”

But if chronic pain has a positive side, it’s that my son has more opportunities to witness gender-neutral parenting. In an age where men are sometimes accepted but not always expected to share in “motherly” duties, I’m relieved that my son observes my husband’s behavior every day. Sometimes, I can see his brow furrow as he studies our actions and mimics them.

He sees my husband take care of me while also taking care of him. He watches as my husband takes on domestic duties without hesitation or resentment. He observes my husband cook, clean, and parent without feeling insecure about his gender role.

I hope that through all that he witnesses, my son is hearing the message that there’s no such thing as “man’s work” or “woman’s work.” Through that message, I hope he accepts that men can care, support, feel, empathize, and love just as well as women can. Most of all, I hope he will realize that his actions and the roles he takes on need not be limited by his sex.

A few nights ago, I bathed my son, put on his pajamas, and turned off the light. For at least the past year, I’ve held him in my arms as he drifts asleep.

But on this particular night, instead of closing his eyes, he sat up and hollered, “Dada! Dada!”

“Time for sleep now, night night,” I answered him.

My husband walked into the room. “Daddy’s here,” he announced.

He lies down next to both of us at bedtime. Our son has come to rely on not one, but both of us for comfort. He knows that we’re both his caregivers. He knows that my husband is equally his parent, not a part-time accessory subordinated below the head role of “mom.” Lying between us, our son rests his head against my shoulder, reaching out for my husband’s hand and rubbing his beard every couple of minutes. Assured of his presence, he drifts to sleep, knowing that we’ll both be there when he needs us again.

As a parent with chronic migraine, thoracic outlet syndrome, and occipital neuralgia, Christina Carrell writes about the challenges faced by moms and dads parenting through chronic pain and illness, Her blog is Mothering With Chronic Pain (https://momswithpain.wordpress.com/). Her work has been featured on The Mighty, The Huffington Post, and BlogHer, among others. She also loves to write about food and subject her husband and toddler to whatever new dish she just concocted. Follow her on Twitter or Facebook.

FacebookTweetPinEmailShares227
We use cookies on our website to give you the most relevant experience by remembering your preferences and repeat visits. By clicking “Accept”, you consent to the use of ALL the cookies.
Do not sell my personal information.
Cookie SettingsAccept
Manage consent