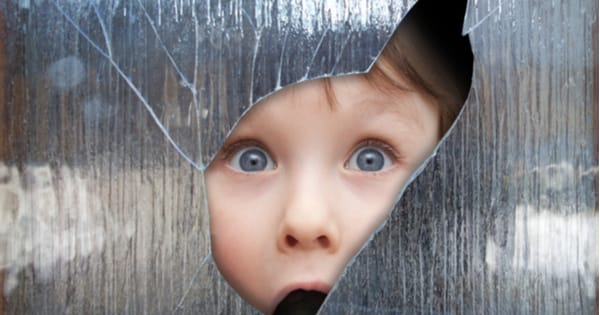 Maybe I thought my brother could do magic—but, if he could, I could too.

Maybe I thought it was a trick but by doing it exactly the way I saw him do it (make a fist, run hard, smack the window) I’d learn what the trick was.

Maybe I thought, well, all of the above but none of it clearly.  It was dinnertime, I was hungry, I knew we were having Tuna Noodle Fish Casserole (I saw the can out) I wasn’t in a hurry for that (she puts peas in it!).

See, it was fall and everybody was back in school, so after school and before dinner we had to play harder (by after dinner it would be too dark).  So tonight we were in the Riley’s backyard but not for long because Mrs. Riley called out the side door “DINNER!” and Denny and his older sister and his younger sister and his little brother all went in.  The kind of sudden stop that causes things to happen.

My brother Gary—still in the yard next door where he “pole-vaulted” without a pole.  He was busy trying to impress Denny and Polly.  Nobody else’s legs are as long, he just grabs ahold of the fence’s stop bar and hurls both feet over.

See, so when everybody was impressed and then disappeared that meant it was me, the only one left.

A strange lull on the block.  Every kid in the world must be home having dinner now except, for no explained reason, my older brother and me.

The Riley’s back porch was wide open, like a room with windows all around but no windows in the windows.  Also, no door where the hole for a door was.   (Looked like the back end of a pirate ship, I thought, Denny said, “You’re crazy.”)

But the porch was attached to the house, bricks, windows with glass (what must be the windows to two back bedrooms), and there was a back-back door, not just the side door, a back-back door to the house from the porch.  A little odd, a door made of five windows of glass side-to-side.  I mean, if the glass wasn’t there it would have looked like a ladder.

I knew this, I saw it before, but now this was the door Gary—

“I can do something you can’t do!”  He was up on the porch, he didn’t even wait for me to come up or say anything, I had to jump up by one of the openings, the empty frames for the windows that weren’t there…

“Watch this,” he yelled.  I couldn’t see without standing on tiptoe, pulling myself up to, but I jumped up and saw—and heard—and realized what must have happened by the time I scooted around to the porch’s door opening:  Gary had run with all his might at that door, the back door to the Riley’s real house and BANG! smashed one of the glass panels with his fist.  Hard.  But, miraculously, it didn’t break.  That was the trick.  I saw him hit.  And he stood there now shaking his hand from the pain of hitting.

“Hey!” I said, and clambered up on the porch behind him.  “Do that again!”  He didn’t.  He stood there smiling at me, and for once he didn’t add Let’s see you do it.  Didn’t have to.  I put up my fist, took a ferocious breath, and ran the ten feet at the door.  I put my hand through the glass, shattering, crashing, a terrible noise, and was sure the Rileys—inside—eating dinner—all eight of them—must have heard.

Suddenly very quiet, and if I stood where I was, surely someone from inside the house would come running, I’d be caught.  I ran home.  Only five, I hoped I was too short to be spotted out their kitchen window.

Wide-eyed with terror I sat at our own kitchen table, dinner not on the table yet (I never do that).  And Gary sat there too, already, early, both of us suspiciously showing up without being called.  Gary sat trying not to look at me while I was staring at him.

Problem was, the neighborhood had the wrong ages and two different religions.  Polly Riley was a year younger than Gary, she was eight, and she’s a girl.  And she went to a different school—Catholic—and went to school with her best friend Dina, a girl and a Catholic too.  Gary’s nine; for him there was nobody else on the block his age until you get to the corner, ten houses down, and that was too far down the block to go.  With me, Denny Riley’s a year older, his brother Patrick, two years younger, and you can guess all the Rileys are Catholic (it happened like that).  Anyway, Gary had nobody to play with except—when he gets bored—me.  Four years too young.  An easy target.

“My hand hurts, too,” I told Gary now.  He said nothing.  “But—not as much as you played like yours hurted.”  Still nothing.  “I don’t think it hurts as much when the glass—”

Whoa!  Mom was busy at the stove, but she stopped now, listening.  Carefully.  A red flag.

“But—I didn’t get cut.”  And I showed my brother my hand without any cuts.  I thought what I’d been confiding in him was in code, only Gary would know—

“What glass?” my mother demanded.  Not a casual question.

“He put his fist through the Riley’s back door.”