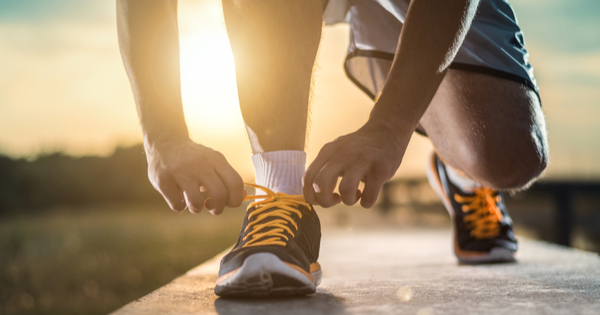 My daughter Sophie shuffles across the kitchen, stepping between fresh fruit, bagels and cans of beans, all waiting to be sanitized from COVID 19. She opens up the dishwasher setting off a domino-cascade of boxes—Golden Grahams, mac and cheese, baking soda. I snort. She rolls her eyes.

“You guys could at least put away the shopping before eating lunch.”

“I’m starving.” I tell her, not pointing out that she, too, could put away the groceries. “At least we put the cold stuff in the fridge.”

I’m bonking. Or since I’ve already started eating, I guess I should say I bonked.

Bonk: (verb) a condition of sudden fatigue and loss of energy which is caused by the depletion of glycogen stores in the liver and muscles.

Recently, I remembered that I prefer to start Saturday with a run. For the past year, I put off my weekend long-run all day and wound up squeezing it in just before dinner—hours after lunch, usually fueled with Ring Dings or ice cream or hard pretzels. Then, when I got home, I ate dinner uncomfortably hot with sweat running down my spine. A couple of weeks ago, facing a ninety-five-degree scorcher, I ran first thing in the morning. Oh, right, I thought. Now I remember why I love running so much.

On a bike ride yesterday, my wife Susan told me she planned to get out early this morning to sit. Sit? She meditates. She convenes with nature. She monitors a colony of beavers. One of the most popular attractions on the Gettysburg Civil War Battlefield is Devil’s Den. Not only was a key part of the battle fought there, but it’s one of the few places in a long, dull day of tourism where kids can actually have fun. It’s a tight cluster of rocks, perfect for an hour of scrambling. Its features include caves, stove-pipes, high drop-offs and a stream-bed loaded with snakes.

A few months ago, we noticed a beaver lodge in an out of the way section of Devil’s Den’s stream. On a couple of occasions, Susan has sat near the lodge early in the morning to keep vigil for the beavers. One time, she was successful. Her plan to sit this morning motivated me to get up early, eat a healthy, filling breakfast of oatmeal, blueberries and walnuts and catch a ride with her to the battlefield. She dropped me off at a trailhead and I jogged off, legs still sore from a brisk four-miler on Thursday night.

So that right there, Thursday night, that’s the point of this story. I run once a week. Oh sure, a few times per week, I’ll pace Susan on her neighborhood loop, but that’s two miles. It’s more relaxing than exercise. I see it as a chance to spend time together. For years, when I pushed myself on a run more than once a week, my body rebelled. My calves seized up, my knees ached, my plantar fasciitis crept back across my heels. Last week, I ran hard three times. Monday: a six-mile trail run. Thursday: that four-miles I already mentioned, and today, eight wooded trail miles at the crack of dawn. Every other day this week included a bike ride.

On February 9, I wrote Crash. And Burn, an account of the worst race I’ve ever run. It was so terrible, it took me more than a month to muster any enthusiasm to write about it. Like almost all my runs over the past year, this one hurt from the start. I arrived later than I hoped, and I ate my carefully prepared pre-race meal—pasta, sausage and Ragu. I made it the night before. Overnight, the pasta absorbed all the sauce and then dried out anyway. The fat on the sausage congealed into unappetizing greasy lumps. It was truly disgusting.

Because I needed to eat something, I gutted down as much of my meal as I could. And I stood on the starting line bonking. Shaking with hunger despite my distended, stuffed belly. I might as well have eaten nothing.

I never got my nutrition regulated and I suffered the whole race. On Crash. And Burn, blogger Kate Duff wrote a comment. Watch “Game Changers” on Netflix. I haven’t looked back since I changed my diet – lighter, freer and energised are words that spring to mind. Anyway see what you think.

The Game Changers is a slickly produced documentary floating the theory that all food products originating from animals are essentially poison to your body. It makes a convincing case that the nutrition of a plant-based diet is better suited to endurance performance. I watched the video. And I was sold.

I immediately decided to become a vegan. And I was a vegan for two entire days. Here’s the problem: I eat pizza no less than four times per week. Eggs at least three times. Giving up these meals would pretty much ruin my life. I already gave up alcohol, I think I’ve given up enough of the things I love in this lifetime.

I did, however, give up meat—all meat except fish and eggs (if those can be called meat), four months ago. And suddenly, over the past few weeks, I’m reaping the reward. I’m running faster and more frequently.  I’m recovering quicker. I’ve stopped walking the steep trail sections. And while I haven’t been tested yet, I guessing my cholesterol is far lower than it was. I love(d) meat. Burgers and sausage were my staples. Ribs and steak, my treats. Improving as a runner is the only reason I can imaging dropping meat. And now I’ve done it.

When I finished my run this morning, I drank some more coffee, and I slowly quit sweating. Then Susan and I went to the grocery store for our weekly shopping. By the time we got there, I was starting to bonk. As I often do on a Saturday morning shopping trip, I grabbed one of the store’s pre-made Italian hoagies for lunch. I stood there, sandwich in hand, and it hit me. I can’t eat an Italian hoagie; I don’t eat meat.

It’s going to take a while to get used to this diet change. When Susan asked if I wanted to go out for dinner on Father’s Day. my immediate thought was a barbecue joint for ribs. For years I scoffed at and pitied my brothers because they are both vegetarians. They both found a reason more important to them than eating meat. Now, I’m surprised to find that I have too.

But I’m not surprised that the reason is running.