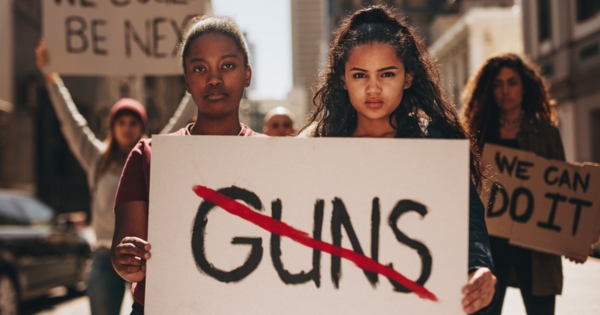 —
Americans are begging for alternative solutions to gun violence. Will 2nd amendment advocates offer any?

We hear from Australia, first.

It’s the day following another mass shooting somewhere in the states when you’ll see it – someone in your social media feed pointing to the example of Australia, which enacted major changes to its gun laws following the 1996 Port Arthur massacre. In a matter of months, the country placed heavy restrictions on high-capacity firearms, and instituted mandatory buy-back programs on such weapons. Mass shootings in Australia have dropped precipitously since then.

So it was a few years back, maybe after Sunderland Springs or Las Vegas or Orlando or San Bernardino or Newtown, a friend of mine on Facebook had posted such a callback.

“It wouldn’t work here because of the second amendment,” one of my relatives commented below the post. “And we’re not Australia.”

A shrug of the shoulders, essentially: I mean, really, what can we do? Our hands are tied by the language of this amendment, so clear in its intent to some, so muddy to others. (Is it condescending to offer the reminder that this amendment was written in a time when muskets could reliably pop off only three rounds per minute?) No alternative solution offered in response. Nothing beyond a casual remark as to why the other side’s suggestion wouldn’t work.

But he isn’t wrong. (Well, not entirely.) No matter the little ways we may chip at the sharp edges of the issue, we’re still looking into the granite face of that amendment. And despite nearly every president – from Ford to Carter to Reagan to H.W. to Clinton to W. to Obama – supporting the ban of so-called “assault rifles,” and despite most Americans, Republicans and Democrats alike, supporting the reinstatement of the ban, and despite studies showing that, while overall gun deaths were largely unaffected by the ban, mass shootings did decrease, it doesn’t appear to be the magic solution to the larger issue of death-by-gun in America. It’s something, essentially, but not everything.

We hear about universal background checks. A full-throated yell for them, in fact, with most Democrats in Congress, and a few moderates in the GOP, pointing to widespread support for the measure – upwards of 95%, depending on the poll – among gun owners and gun control activists alike. But the effects of such a policy are little understood. A predictable byproduct of the anti-science Dickey Amendment, where public health organizations sidestep any study of the effects of gun violence, or the efficacy of gun control policies, for fear of losing federal grants. And despite the indications that universal background checks are an effective component of a larger effort to curb gun violence, the disheartening response from experts when asked whether such a law would have prevented most mass shootings is often: “Not likely.” A 2016 NPR headline summed it up thusly: “Research Suggests Background Checks Work, But They’re Not Everything.”

We look, finally, to those resisting the change. When the refrain for a “common-sense” law grows loud enough, isn’t it natural to wonder who’s opposed to it in the first place? And is there an even more common-sense alternative we’re overlooking? But a strange phenomenon occurs following these massacres: the NRA, gun rights advocates, and the men and women representing them seem to have stepped out of the room. Sure, there’s widespread agreement that gun violence is a problem. But beyond dissent with the way the Democrats and their ilk have suggested tackling it, there doesn’t seem to be any discernible policy alternatives put forth. Nothing, in fact, outside of slavish adherence to an amendment written in a time when it was legal to own people. It’s a spite house, a platform built solely on opposition to the opposition’s platform.

Following El Paso and Dayton, a chorus began, familiar and simple, a two-word plea to Congress and the President: “Do something.” I saw it splashed across every social media channel, comments on news stories, sports stars grabbing mics on the side of the field and yelling it into the void. Americans are begging for action, desperate for real solutions to a problem that killed nearly 40,000 of our brothers and sisters last year. Something more than think-piece lamentations about the erosive effects of fatherless sons. More worthwhile than victim-blaming narratives built around the idea that “if someone in that crowd had a gun to stop him…” (particularly when rates of gun ownership by American household have continued to drop for the last 35 years). Certainly something more actionable than thoughts and prayers.

Maybe it’s a robust gun-licensing program, a so-called permit-to-purchase, a throwback to the 1960’s and earlier, when requests for gun permits went through the local police department. Maybe it’s a compromise that keeps firearms out of the hands of the most statistically at-risk individuals, those with violent backgrounds, a history of partner abuse, and the like. Maybe it’s new policies to assure compliance with our current gun laws, many so poorly-enforced it’d be laughable if it weren’t for the consequences. Likely, it’s a mix of solutions, and an agreement across party lines that new investment in research is key.

The mic is on and the floor is open. But if 2nd amendment advocates continue to offer nothing instead of something, with spite standing in for solutions, they’ve chosen service to steel, lead, and plastic, over service to their fellow Americans.

Joel Wayne is a writer living in Boise, Idaho. His work has appeared in The Moth, Salon, and the Sun Valley Film Festival, among other places. He can be visited at JoelWayne.com.

Facebook27TweetPin2EmailShares29
wpDiscuz
Share this ArticleLike this article? Email it to a friend!
Email sent!