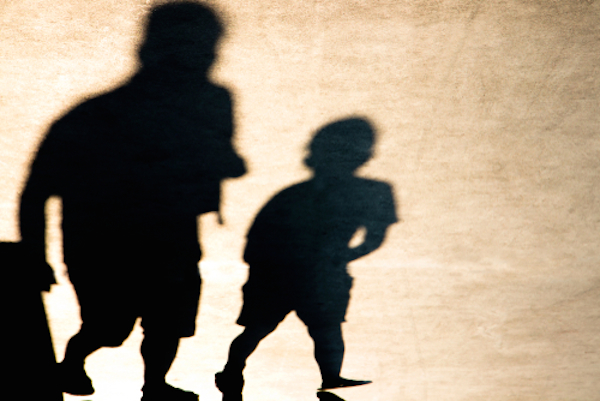 I just spent five hours on an airplane with my teenage son, in during that entire trip, during which we spoke at length, I never said one thing that made any sense, or was intelligent, or even a little bit smart, at least in his opinion. During that same time, however, he–as was painfully obvious by the looks on his face, especially the condescending sneer, was never wrong about anything–and mind you we covered more topics than Alex Trebec covers in a month.

It should be simple:

Son loves Dad. Dad loves son. It’s complicated for many reasons but I think the main reason is that as boys we never thought growing up and becoming dads, so we didn’t plan for it–hell, it never crossed our mind. As a matter of fact, I don’t think men think about parenting until their woman says to them, “I think my water broke”, and then, 24 hours later, they’re fathers.

My own father was simple. Primitive. He was not an intellect. He looked rural and he acted rural. He was mildly racist, sexist, and homophobic: if he’d seen a man kiss a man, he would have fallen to the ground and died, not necessarily in that order.

I loved him but I didn’t necessarily respect him. In my opinion, he was too passive, too pliant. He didn’t control his surrounding–his surroundings controlled him. And that which he couldn’t change, or understand, he lashed out at. I wanted to be close to him, but I was wary of him.

You don’t get to pick your father, of course. You get what you get. The question is: what if we could pick our fathers?

You are going to create your perfect father. Open your notebook, find some crayons or colored pencils or just cut pictures out of a magazine.

Create the father you see in your mind’s eye. Give him the house he should live in, the car he should drive, the job he should have–and if that man even remotely resembles your actual father–congratulations. And if he doesn’t, well at least you have the drawing and a notion of what kind of father you want to be.

END_OF_DOCUMENT_TOKEN_TO_BE_REPLACED

FacebookTweet1PinEmail1Shares2
wpDiscuz
Share this ArticleLike this article? Email it to a friend!
Email sent!