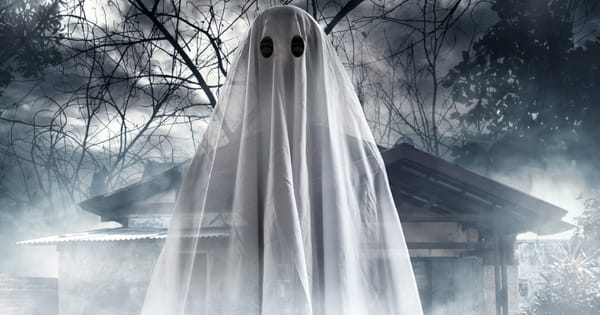 I woke up with a start the other night because I swore I heard someone knocking. All that I could think was that one of my friends was intoxicated and knocking on my door wondering if I had any more Miller Lites and if there was anything to eat. I laid there listening for a minute or two and then heard it again.

This time I couldn’t blame it on my dream or a neighbor or a car door or any of the other excuses my brain was giving me to stay in bed rather than check it out. I reluctantly got out and walked down my creaky hallway to the top of the stairs and stood in the dark listening intently. Nothing happened.

I figured there had to be a neighbor or something that was making the noise. We’re surrounded by houses here on all four sides and live in a busy neighborhood so it wouldn’t be a stretch. I looked out of all the windows upstairs. I look out my son’s room first, then the office, the bathroom, and then my bedroom and saw nothing. Whatever made that noise was gone and I could go back to sleep. I cursed under my breath getting back into bed for not being able to afford a house out in the country where I could get some rest.

I laid back down and got comfortable but just as soon as I did I heard a little beep noise in the distance. At least it wasn’t knocking. I thought someone was messing with me.

It was probably a couple of friends outside that had one too many and were trying to cause a scene. That wouldn’t be out of the ordinary for me and seemed the most plausible. I decided not to get out of bed. They’d tire themselves out. They wanted me to come downstairs, turn on the lights and look outside. Then they pelt me with water balloons or toilet paper or do some other immature thing. I wasn’t going to give them the satisfaction.

But the beep was relentless. It wasn’t in any regular interval so I didn’t think it was phone notification or a rogue kid toy. I couldn’t get comfortable. That noise was never going to let me sleep and the more I listened, sitting up in bed with my hand cupped around my ear, I realize that it was coming from downstairs. I got up again and stood at the top of my stairs and waited in the dark for it. It came and went again and again. I crept downstairs to find the source.

I had to first stand in the living room, then the kitchen, then in the former dining room that’s now a playroom. It was definitely coming from one of my son’s bins of toys. The hair on my neck sat back down and my adrenaline started to recede. This would be easy. Locate the toy and shut it off, then back to cozy slumberland where I belonged.

But it wasn’t easy. I dug down deep into a bin of his “make-believe” toys. Fireman clothes and accessories, a chef jacket, some musical instruments, and a superhero mask were all cast aside. Finally at the very bottom of the bin was two walkie-talkies. The second I spotted them I felt complete relief.

That’s when the noise changed. It went from a solitary beep to a kind of rolling multiple beep call. The kind you hear from a policeman walkie. I was floored. How to did it change the second I noticed it? I stood silent for a minute until the rolling call happened again and interrupted me. I grabbed one of the walkies and took a close look.

It was off. One down and one to go. The rolling call happened a third time and I swear it was louder than the first two. This one was face down so I couldn’t see the screen right away. I grabbed ahold of it and spun it around and to my absolute and complete surprise, it was off too. I stared stupidly at the empty screen wondering what to do next.

It beeped at me. I dropped it. I picked it back up in complete disbelief that it was off and checked it again just to confirm that it was off. How is it possible that it was making noise when it was off? I held it in my hand, the hair on the back of my neck standing on end, and waited for it to make another noise.

I waited and waited and heard nothing but silence in return. I looked around the dimly lit room and felt it. Someone was watching me.

I stood up slowly, shut off the lamp, and slowly walked back upstairs. My son heard me and called for me. I went into his room and he asked: “Dad, what was that noise”?

“My phone. No biggie. Go back to sleep.”

He rolled over and I kissed the back of his head. I left and headed back to my bed. My wife was sitting up. “What were you doing downstairs”? she asked.

“Turning on the air conditioner. It’s getting muggy.”

She rolled over and snuggled back into her pillows. I was awake for another hour or two waiting for the beeping to continue. It never did and I eventually fell back into a nervous and sweaty sleep.

So, you ask yourself, “How do you parent when your house has ghosts?”

Lie. Lie your head off, cover it up, swallow it down, and write an article about it in the dark.