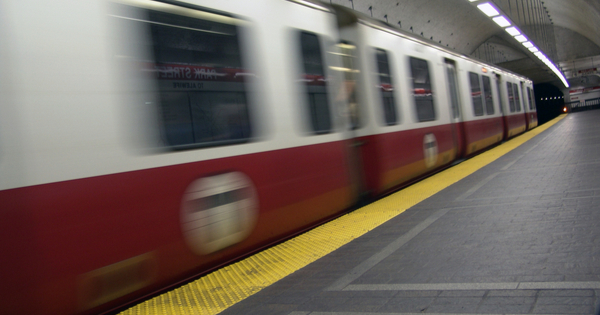 On Wednesday, I had a series of appointments in Boston, and the prospect of facing hours of rush hour traffic convinced me to use all of the public transportation modes available.  I boarded an Amtrak train in Kingston, Rhode Island, hopped onto a BlueBike to ride from the Back Bay Station to Dorchester, road the T back to downtown and continued my day with a mix of walking and riding, til returning home that night.

During all this movement, I was mindful of an everyday spirituality – particularly an urban version of it.  My friend Laura Everett has written about this in her book, Holy Spokes.

I remained aware of my breathing, walking, moving, and singing as expressions of Everyday Spirituality.  But, it was while riding the T that a Holy Intervention struck me.  (The photo below was taken just moments before this all happened) 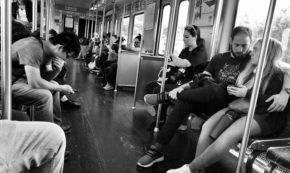 While everyone was immersed in their cell phones, an older woman in a wheelchair was attempting to exit the subway car. Her left wheel got caught on the part of the doorway.  She was stuck and in distress.  It took a minute for all of us to realize what was unfolding.

Soon, many people were up to her aid with one person offering the woman assurance, and two others working on getting her wheelchair unstuck.  All this unfolded in a matter of, maybe, a minute and a half. Eventually, she was on her way, and the riders returned to their seats.

But, for a minute or two strangers exchanged reflections on what happened, evaluations of the safety of her wheelchair, the nature of riding on the T and thoughts of well being for the rest of the day.

For a brief moment, we were a community – just seconds before we were all in our worlds, strangers with no connection, and no interest in connecting. But, something broke that all apart, and transformed us into generous and concerned human beings.

I’m not saying God caused that to all happen through the woman in distress, but I am saying that when the woman’s emergency occurred and people responded, a certain kind of holiness was born into the world – the holiness of the best of human nature.  There’s something sacred in that, and that’s an example of Everyday Spirituality.

Do you have stories like this from your life? Let me know [email protected]

Facebook9TweetPinEmail1Shares10
wpDiscuz
0
0
Would love your thoughts, please comment.x
()
x
| Reply
Share this ArticleLike this article? Email it to a friend!
Email sent!