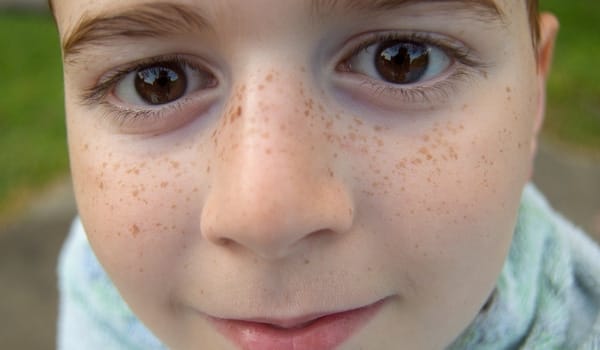 Did you know that just because someone looks like someone you know doesn’t mean they act the same?  And, did you know “something’s funny” sometimes means you’re never supposed to laugh?

La, la, la, we were on vacation, the whole family.  That meant Aunt Bernice and Cousin Linda, too.  Seven of us crammed in Dad’s station wagon, going home.  I love vacations, but ten days up north—and they make me sleep in the “ante-room”—that’s not for aunts, more like for ants—because I have allergies.  So, I’m outside on the tent’s porch, up on a cot, and if it rains I get dripped on.

Where was I?  Oh—coming home.  Tired of being outside day and night.  I love vacations but it’s a relief when you give up and get to go home.

Oops—Cousin Linda has a temperature.

Oops—we’d better stop, neither my mother nor my aunt remembered to bring a thermometer.  (How not?  They brought everything else!)

Oops—“I don’t want her to have ‘vulsions,” my aunt’s pleading but in a husky whisper.  Me—in the back backseat (the backseat in back of the backseat) secure between suitcases, ice chest and Coleman stove—I can hear everything and, with my aunt and cousin and mother together I’ve learned to expect half what I hear may not make sense.

My father wasn’t mumbling exactly, but way in the back I couldn’t hear him.  And when my mother and Aunt Bernice talk at the same time, he usually laughs and shrugs and does what they want.  He’s driving the car, but that’s just for looks.

“Besides, we’ll be home in less than an hour—” Dad pointed out.

“But then we’ll have to turn around and find a hospital at home,” my mother answered.

“Okay, I hope you’re right,” my father turning off the highway onto another road, two-lane, going in almost the opposite direction.

Big place, lots of buildings.  But if this is a hospital, I thought, why don’t the buildings touch?  You know, come together?  Like the hospital I know, the buildings all connect.  Here they’re set apart, you’d have to cross a field to get to—

“Park over there,” my mother directed.  There was a parking lot, and she wanted a parking spot under a tree for the shade.  Why?  Were we gonna stretch poor hot Linda under a tree to cool off?

Screech, stop, park.  Long way to any door I could see.  But there were people, people dressed in white but wearing white shorts and playing—  Maybe it was a bunch of hotels, maybe there’d be a swimming pool, maybe—  But, no signs, nothing big and splashy that looked like a hotel’s big splashy entrance.  Another look at the buildings, there were no open windows, no balconies, no beach towels hanging out.

Mom would stay in the car.

I could guess why.

At home, she takes a nap every afternoon.  The doctors burned out her ‘roid—which is like a switch under the chin in your neck, not in your thighs.  Which makes her poop out about two o’clock.  We have to be very quiet when we come home from school till we know if she’s up or not.

Oh—and it’s not a sore throat.

Anyway, Mom’s decided we all have to get out of the car so she can stretch out and take a nap on the backseat.  “Just be quiet for an hour, okay?  You can go watch them play tennis, won’t that be fun?”

Dad and Lewis have gone with my aunt and Linda inside the first big brick building.  Gary and I are “too young to go in”.  So, we get to watch-tennis-fun.

Big field of grass, mowed short like a golf course.  Gary and I dashed towards the tennis courts, the people swinging their arms methodically, like half of a swimming stroke but not in water.

High fence all around the tennis courts, and four tennis courts inside, and the fence—no place to enter I could see.  High fence like a baseball diamond’s backstop, but it went all around the courts with only one place that might be a gate, made out of fencing, too, and closed like you’d have to ask someone to let you in.

Snooty hotel, if it’s a hotel.

At the fence Gary and I stood, fingers through the fence, looking, couldn’t do anything but look.

Back-and-forth, back-and-forth, and most of the time the ball stopped after a single smack, the players stopped to retrieve it, to smack it again—hard—but only once.  Stop, retrieve, smack.  Not much to look at.  Nobody close enough to explain why they didn’t play catch instead.

Nobody?  Oh yes there was someone.

A woman not wearing white, sitting on the grass twenty feet away.  Inside the fence, but she wasn’t—it didn’t look like she was playing tennis.  She dressed, she looked exactly like my grandmother.

I sidled right beside him.

—Where the woman sat inside the fence, holding out one hand now but not like a wave, as if she had something in her hand, on her hand, she was holding out to offer us—to feed—

“What a pretty speckled little bird!” the woman said, sweet-voiced, almost like a song.

“What a pretty speckled little bird!” the woman said again, same tone exactly.  Smiling up at us, still holding out her hand, not laughing.

‘S when I looked at Gary’s face.  White.  The white, with his freckles, the color of a giraffe.

‘S when Gary’s head bobbed again, this time bobbled hard as if somebody hit—

He turned and ran.

I turned and ran, too—no time to figure why, to ask him what she said, what it meant what she said.  We darted across the grassy field towards our car.

This cut short my mother’s nap.

My brother a bird?  He does have a cowlick and flap his arms a lot, but did the woman really think he was—?!?

By the time my dad returned, by the time I’d practiced saying it three times (“Pretty speckled little bird”), by the time I asked Dad why the woman said that—did she really think Gary was a bird?  We were already packed in and driving away.  Nobody in the car would answer, though the farther away we got the funnier it seemed to be to my father and Lewis.