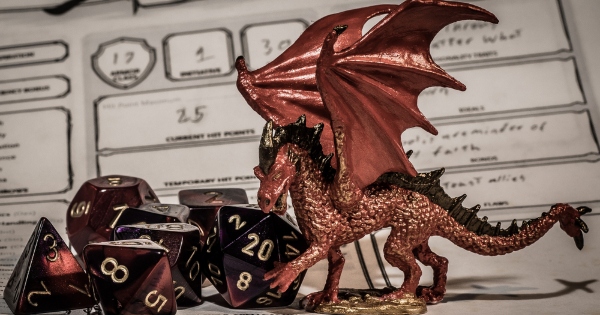 —
I have been playing the game Dungeons & Dragons off and on since 1978 when my father, an avid gamer before anyone called themselves a gamer, bought the very first incarnation of that very first role-playing game. I was twelve then, and it seemed like a revelation the first time I played it. Here was a game where you told stories collaboratively, where you had your own character whom you worried for and whose victories you celebrated, and where there no winners and losers. The point of the game was simply to have fun.

Though D&D, as it was always known, grew quickly in popularity, it remained a niche hobby, favored by a particular set of (almost entirely) boys who were comfortable spending a night or an afternoon essentially playing make-believe. It was as if we’d taken all our toy soldiers and knights and dragons and found rules and dice to bring them life. There was no competition; no trophies were handed out. I felt a little as if I was in a secret society. I didn’t want to mention how much I loved playing the game to anyone who didn’t play it themselves. Seen from a certain angle, it seemed like the sort of thing that maybe should be left to children, and my friends and I were no longer that.

The game has, in the last five years, exploded in popularity. I hear it’s now cool to play it. I believe this is a healthy development, and not just because I still play it myself. Fifteen years ago, I was running a game one night with, among other people, a friend I knew from high school. He was a successful software engineer, and a father of two boys. At the end of the night he confessed that he couldn’t quite figure out why were still playing the game. “Don’t you ever wonder,” he asked, “about the point of spending a night sitting around a table rolling these dice?”

“Don’t you ever worry that maybe it’s a waste of time, that all these hours could be better spent doing something else?”

In fact, it was a question that so nagged at me I would occasionally declare that I was done with the game, and put all my books and dice away and not think about it for several years, before being drawn back in for one reason or another. The other night I was playing–via an online, virtual tabletop–with a group of old, old friends. It was the best sort of game, where the players (I’m what’s known as the Game Master, or Dungeon Master, the one who constructs the framework for the game’s story) made some unexpectedly poor choices and were nearly wiped out, saved only by a few very lucky rolls. It was exciting, spontaneous, and hilarious.

Afterward, I was sitting with my wife, Jen. I could still feel the happy glow within me the game left behind. I thought of how all my friends had gone back to their lives, to their wives and children and jobs and mortgages and various real adult responsibilities just as I was returning to mine. I looked over at my wife. There had been maybe nothing more real in my life than my relationship to her. I have always felt that my choice to be with her was the choice against which all other choices were measured. Yet what really told me to pursue her? What was that a choice for?

“God that was fun!” I said. I thought of trying to explain why it had been such a good session, but Jen is not a game-player. Whenever I mention D&D, I can feel her containing an eye-roll. I love her just the same. In fact, her eyerolling is part of what I love about her. They please though they bring me nothing, earn me nothing, put nothing on my table; they cannot tile my roof or repair my car. All they do is fill me with that same happy glow, a thing I cannot touch or see or measure but which I would not want to live one day without.