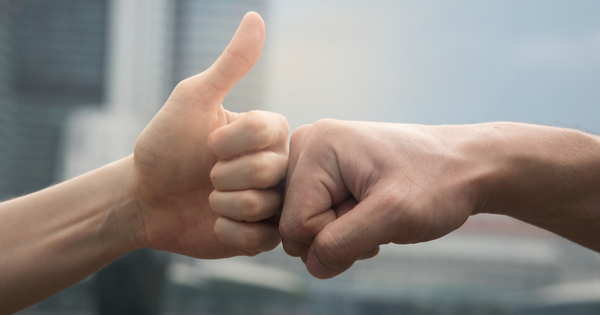 Several weeks ago at the beginning of a business meeting, I greeted a close female colleague whom I had not seen for a very long time with a kiss on the cheek. It wasn’t until she tensed that I realized that under the new rules of behavior, I had made a mistake. We were surrounded by less familiar faces, and my gesture, however innocent, was no longer an appropriate professional greeting. As I said goodbye we shook hands.  In a follow-up meeting, we shook hands again, when I arrived. But as I departed, I asked if it was all right for me to give her a hug.  She laughed, nodded, and we exchanged a kiss on the cheek.

This incident has triggered a series of reflections.  The question is, “What altered the dynamics of the exchange between my old friend and me?” I think the answer is the power of consent.

It’s my perception that men are experiencing less touch in our casual social interactions with women these days.  There’s a chill in the air, in part because the #MeToo Movement has made us all self-conscious, and wary.  Men want to make sure that we aren’t taking liberties or asserting ourselves in ways that are inappropriate.  But I also believe that the increasing distance in our daily contact isn’t healthy for either men or women, and we must lean in to define a better set of norms to replace our current, awkward dance.

Many researchers and social commentators have documented the fact that men experience “sense deprivation” or “touch isolation” as we leave childhood. Dan Kindlon and Michael Thompson wrote about the phenomenon extensively in their book Raising Cain, noting that physical contact grows less frequent by around the age of eight or nine, and decreases more precipitously during adolescence. The impact of this deprivation is harmful both to our health and emotional well-being.

Because the absence of touch growing up has been linked to anger and physical violence, the stakes of making a new set of rules are very high.

My sense of touch isolation has been intensifying of late as we men, young and old, have had to step back from social conventions that used to be considered not only normal, but proper. There’s a stutter step where there used to be a two-step that men of my era knew how to gracefully execute.

I do miss the days when it was perfectly natural for me to give a female acquaintance a kiss on the cheek when meeting up, or a hug upon departure. On the other hand, I recognize that there are some women who are rightfully uncomfortable with this form of contact, and agree that men must become much more attuned, understanding when a woman prefers a handshake to a kiss.

A fundamental requirement for “the new rules” that we are working out is that men must learn how to use their words to secure consent before any physical contact occurs. The history of women receiving unwanted contact necessitates that the conversation starts there.

Men must also become much more practiced in the nuances of non-sexual touch. That means that we must rethink how we raise boys.  Frankly, adult men have to take some responsibility here—, discarding old norms, and demonstrating how men can express themselves physically, maintaining a healthy level of touch with their sons as they grow up.

Lately, I have begun to realize that the way in which I was raised may have been a happy accident that could provide some clues as to what this might look like. Although I would never hold myself as a shining example of skilled practitioner of the language of touch, I do think that I probably have more exposure to the variety of expression that exists, partially because of the way that I was raised, and in part because of the open posture that seems to be core to my physical and emotional being. For whatever lucky reason I was unwilling to decrease physical contact as I became a young adult, as most other men do.

When I was young, I was allowed by my parents, grandparents, and neighbors to exercise my need for physical contact without shame or embarrassment. Later, as I entered my twenties, that willingness to approach life with an open mind and body turned out to be a gift. It was another form of connection. I discovered that there are gestures, dialects, nuanced phrases that a fluent translator of body language can use with great personal effect and positive impacts, regardless of gender, for mutual, non-sexual pleasure.

I have an unusual number of role models to thank for educating me on all this. My mom and dad were great teachers.  They were aided by a string of male mentors who ran the gamut from small-town farmers, educators and entrepreneurs in Ohio to laid back hippies, doctors, lawyers, wildcatters and cowboys in Texas. All decent guys, each with their own vernacular as to what was appropriate behavior. I watched them closely and adapted their idiom to my own communications pattern.

My female tutors were all strong women, feminists in the seventies who were comfortable with some form of non-sexual touch. When I was in college, an older woman would often ask me dinner. I was a shy young man at the time, but as we sat with her guests at a glittering table, she would lay her hand on my forearm and talk directly into my ear in a way that communicated her strong appreciation of my emerging masculinity. Over time, with her admiration and support, I eventually found myself joining the remarkable conversation that unfolded each evening. While her voice and self-assured dignity certainly lifted me up, it was her touch that gave me the confidence to speak up, at a time when I barely spoke a word in class.  That’s the power of touch.

Despite these “happy accidents” in my upbringing, I am thankfully still learning.  Are we inventing a new dance? I hope so.
It’s clearly a work in progress that must be negotiated on a case-by-case basis. We’re going to make mistakes, as we literally feel our way into it. Perhaps all this uncertainty is a good thing, a chance to re-examine our assumptions and reframe old behaviors with new, fresh vitality.

I do believe that we can move beyond the current general discomfort, even distrust, to experience a delight in our day-to-day movements. If I could wave a magic wand, I would create a class during high school that teaches the many different ways that one can ask for consent and the language of touch. Nothing could be more important than helping young men and women learn the subtleties of physical self-expression.

After a lifetime of adventures exploring the many ways in which men and women interact physically, I am absolutely certain that consent and a nuanced sense of touch is absolutely essential to our wellbeing. We need to make a concerted effort to rediscover the joy and beauty in this basic form of communication, the lost language of touch.

Facebook17Tweet2PinEmailShares19
wpDiscuz
Share this ArticleLike this article? Email it to a friend!
Email sent!