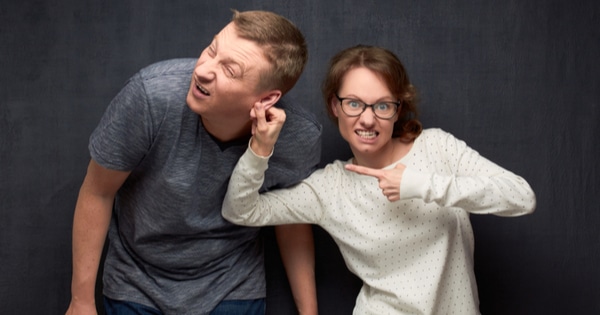 This is something my wife will say to me a lot:

Not everything’s about you, Raymond

These arguments begin when we’re going over how she feels about something or other. She’ll tell me what’s happening and how it makes her feel. I’ll instantly go on the defensive — and then we’ll both achieve nothing from there. Mainly it’s because I’m hot-headed and she’s stubborn as a mule. I’ll argue with her and she’ll be mostly unmoved.

We don’t argue much my wife and I, but when we do it can get heated; not violent, but we’ll certainly do quite a bit of back and forth until we meet some middle ground, or she tells me to drop it and move on.

One thing she said to me in the middle of an argument a couple of years back was that sometimes it wasn’t about how I feel, it was about how I was making her feel. It took me back quite a bit because I hadn’t considered that position before — that her wagging her disapproving finger at me in anger wasn’t about her having a moan at me, it was basically how I was making her feel inside.

Before you read on, you’ll have to realize that I grew up a single child to two incredibly selfish parents. They weren’t aware of this of course, in their minds they were tremendously giving and outwardly helping with whatever they gave. In their minds they were pinnacles of societal philanthropy — but it all came at a price, you see. There was always something attached to it to be collected at a later date. A covert contract as to speak. So, I had a steep hill to climb when it involved thinking the world didn’t revolve around me.

I was working in my last full-time job around that time, before I started freelancing. And it had occurred to me that all these skills of impartiality I was learning at my work, I could apply them to my home to make my marriage better. I’d start listening to my wife better to make her happier. It was a start of course. I had recognized at work that by just listening to people I could get them to reveal so much more about themselves than by talking at them.

So, I listened to her.

Turns out I hadn’t been listening for quite some time because as her feelings poured out like a dirty sewer pipe I could see as she was doing so there was a lot of frustration in her words. So I listened, even when it hurt like a knife in the chest.

Sometimes, it really isn’t about me. Sometimes it was more so about how she felt than how her words were making me feel. What she was saying hurt quite a bit, but I refrained from speaking, or getting angry, or even judging her for what she said — it had to come out somehow, right? And if I was cannon fodder for that moment then so be it.

And then I acted upon what she said. I listened, and I acted on it.

I know my wife. There was no malice behind what she was telling me; she only wanted a good life for her, me and Alex, and the way things were at that moment in time, well, it wasn’t making her supremely happy. So I acted upon what she was telling me and now things are better. I’m able to get her to be more forthcoming with me and I do whatever she’s asking of me — because realistically she’s never really asked for much.

People tend to palm each other off with the phrase:

Don’t worry about it

But I realized through listening to my wife that was a way of palming off what she was saying and putting it to the back burner. It hurt you see, to talk about these things, and rather than bring them to the surface it was easier for me to say,

Don’t worry about it, everything will be fine

But to her it came across as if I didn’t just care, or that I wasn’t interested. When I really did care, it just hurt to talk about.

But it works both ways you see. I noticed as I was listening to her more and more then she was more forthcoming and treated my worries and fears a lot more seriously; she had gone from not caring that much to vigorously defending my ability to fulfill my life again.

Sometimes couples get stuck in a negative spiral — this was the one we had when I was unemployed. I wasn’t fulfilling my life and in turn that was having negative impacts on my family life and so on — and sometimes we can’t see the forest for the trees. It only takes one to move forward and break that cycle.

Sometimes you have to be the bigger person and step up, make that first move, make that difference in your life.

Doing so changed my life for the better!