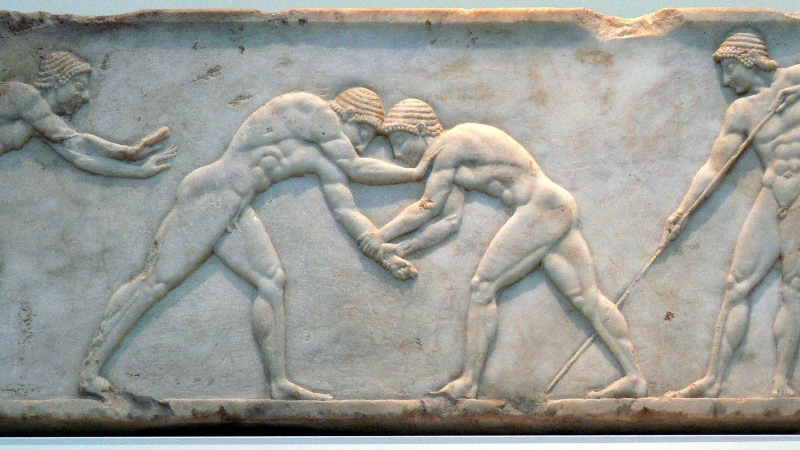 The art of living is more like the wrestler’s art than the dancer’s in this regard, that it must stand ready and firm to meet whatever happens to it, even when unforeseen.

Greek and Roman youths typically engaged in combat sports, including wrestling, boxing, and the pankration, which combined elements of both. It should be no surprise that we find many references to these sports in the writings of ancient philosophers, many of whom must have had personal experience engaging in them, as well as watching others compete.

The Historia Augusta says that in his youth the Stoic philosopher, and Roman emperor, Marcus Aurelius was “fond of boxing and wrestling”, and that he had been trained to fight in armour. However, we’re told that over time he became more physically frail, suffering from chronic health problems, and his interest in philosophy came to distract him from these physical pursuits.

As well as wrestling in his youth, Marcus led a dance troupe called the College of the Salii. They performed ritual dances dedicated to Mars, the god of war, while dressed in arcane armour, carrying shields and weapons. So when he says that the Stoic attitude toward life more like that of a wrestler than a dancer, he’s speaking from years of personal experience in both disciplines. As we’ll see, the idea that the mind-set of a philosopher should resemble the fighting stance of a wrestler had already been stressed centuries earlier by one of the leaders of the Stoic school.

Elsewhere, Marcus elaborates on different aspects of this analogy, such as in the following passage:

In the gymnasium, someone may have scratched us with his nails or have collided with us and struck us a blow with his head, but, for all that, we do not mark him down as a bad character, or take offence, or view him with suspicion afterwards as one who wishes us ill. To be sure, we remain on our guard, but not in a hostile spirit or with undue suspicion; we simply try to avoid him in an amicable fashion. So let us behave in much the same way in other areas of life: let us make many allowances for those who are, so to speak, the companions of our exercises. For it is possible, as I have said, to avoid them, and yet to view them neither with suspicion nor hatred. — Meditations, 6.20

In another well-known passage, Marcus compares the principles of Stoic philosophy to weapons.

In the application of one’s principles, one should resemble a pankratiast, and not a gladiator. For the gladiator lays aside the sword which he uses and then takes it up again, but the pankratiast always has his fist and simply needs to clench it.

Indeed, Marcus describes the ultimate goal of Stoicism, as becoming “a wrestler in the greatest contest of all, never to be overthrown by any passion, deeply steeped in justice, welcoming with his whole heart all that comes about and is allotted to him, and never, save under some great necessity and for the good of his fellows, giving thought to what another is saying or doing or thinking” (Meditations, 3.4).

Stoicism as Wrestling in Epictetus

The philosopher whom Marcus Aurelius quotes most often is the Stoic teacher Epictetus, who liked to compare training in philosophy to training in wrestling.

But see what the trainers of boys do. Has the boy fallen? Rise, they say, wrestle again till you are made strong. Do you also do something of the same kind: for be well assured that nothing is more tractable than the human soul.

Like Marcus, Epictetus portrays philosophy as the greatest fight of all, for the prize of good fortune and happiness.

For we must not shrink when we are engaged in the greatest combat, but we must even take blows. For the combat before us is not in wrestling and the pankration, in which both the successful and the unsuccessful may have the greatest merit, or may have little, and in truth may be very fortunate or very unfortunate; but the combat is for good fortune and happiness themselves.

However, this metaphor was probably already common in Stoicism before the time of Epictetus.

…opposing judgment and forethought like arms and hands to the strokes of fortune and the snares of the wicked, lest in any way a hostile and sudden onslaught be made upon us when we are unprepared and unprotected.

Stoicism as Wrestling in Panaetius
In a less well-known passage, from the Roman grammarian Aulus Gellius, we find the same analogy being attributed to Panaetius, the last head or “scholarch” of the Athenian Stoic school. The chapter in Aulus Gellius’ Attic Nights is titled:

Of an opinion of the philosopher Panaetius, which he expressed in his second book On Duties, where he urges men to be alert and prepared to guard against injuries on all occasions.

He notes that Panaetius’ On Duties had particularly influenced Cicero, generations earlier. In it, says Gellius, was to be found an “incentive to virtue”, which ought especially to be kept fixed in the mind. Almost three centuries before Marcus Aurelius, Panaetius states very clearly that the Stoic wise man must adopt a mental attitude, of constant mindfulness and vigilance, resembling the fighting stance of a pankratiast:

The life of men who pass their time in the midst of affairs, and who wish to be helpful to themselves and to others, is exposed to constant and almost daily troubles and sudden dangers. To guard against and avoid these one needs a mind that is always ready and alert, such as the athletes have who are called ‘pankratiasts.’

Panaetius continues, by describing the fighting stance of an ancient pankratiast:

For just as they, when called to the contest, stand with their arms raised and stretched out, and protect their head and face by opposing their hands as a rampart; and as all their limbs, before the battle has begun, are ready to avoid or to deal blows — so the spirit and mind of the wise man, on the watch everywhere and at all times against violence and wanton injuries, ought to be alert, ready, strongly protected, prepared in time of trouble, never flagging in attention, never relaxing its watchfulness, opposing judgment and forethought like arms and hands to the strokes of fortune and the snares of the wicked, lest in any way a hostile and sudden onslaught be made upon us when we are unprepared and unprotected.

I think these earlier passages help to provide some more context for Marcus Aurelius’ remarks and give us a more rounded idea of what the Stoics meant by saying that the art of living is like the art of wrestling. It means being constantly mindful, alert, and prepared in advance to meet life’s challenges. The wise man, in other words, is never to be caught off guard by the blows of fortune.

Previously published on Medium.com and is republished here under permission.
—

Facebook428Tweet13PinEmail1Shares442
wpDiscuz
0
0
Would love your thoughts, please comment.x
()
x
| Reply
Share this ArticleLike this article? Email it to a friend!
Email sent!