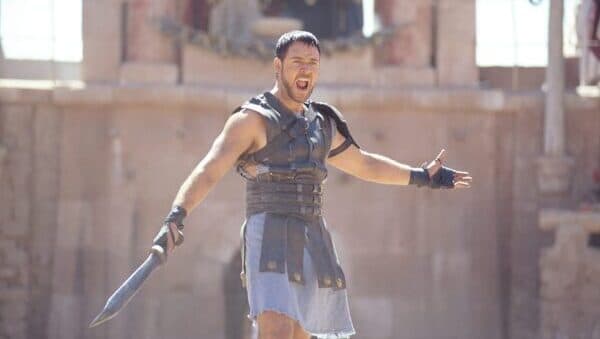 In 2018, Deadline announced that Paramount Pictures have green-lit a sequel to the hugely successful sword-and-sandals action movie, Gladiator (2000). Gladiator 2 will be directed, like its forerunner, by Ridley Scott. Back in 2006, the musician Nick Cave wrote a fairly surreal script for Gladiator 2 that was perhaps bound to be rejected by the studio. This time it’s been announced that Peter Craig, who worked on two of the Hunger Games films, is writing a new script.

Of course, Maximus, Russell Crowe’s character, dies at the end of Gladiator. So how can there be a sequel? Well, it’s been reported that Gladiator 2 will continue the story of Lucius Verus II, the young son of Lucilla and grandson of Marcus Aurelius in the original movie. In reality, although Lucilla and her husband Lucius Verus did have a son called Lucius Aurelius Verus, he died young unlike the corresponding character in the movie. Commodus, the son of Marcus Aurelius, is described in the movie as Lucius’ uncle.

Producer Walter F. Parkes has confirmed “It picks up the story 30 years later… 25 years later.” Lucius was a child of about twelve years old in the original, so we can probably expect to see him in his late thirties or early forties. Given that Gladiator was set in 180 AD, it seems the sequel will be set around 205/210 AD. In the real world, this would be during the reign of the Roman emperor Septimius Severus.

Will I be known as the philosopher, the warrior, the tyrant. — Marcus Aurelius, Gladiator

There’s obviously a fair amount about Marcus Aurelius and his son Commodus in Gladiator. It’s not, of course, meant to be entirely historically accurate. Much of the story is fictional, although many details do correspond with real aspects of Roman history. For example, Russell Crowe’s character, Maximus Decimus Meridius, isn’t real. However, he does bear some resemblance to the real Marcus Aurelius’ senior general during the Marcomannic Wars, Tiberius Claudius Pompeianus.

Seemingly like Crowe’s character, Pompeianus rose from humble origins to become the most highly regarded general on the northern frontier and a trusted advisor to Marcus Aurelius. Whereas Crowe’s character seems romantically linked with Marcus’ daughter Lucilla, in real life Pompeianus actually married her. Marcus reputedly asked Pompeianus to keep an eye on Commodus after he died but the young emperor abandoned the military camps and returned to Rome, leaving Pompeianus behind. Moreover, like Crowe’s Maximus, Pompeianus was reputedly asked by Marcus to serve as his interim successor, as emperor, not to restore the republic, as in the film, but until Commodus was mature enough to assume the throne. For some reason unknown, Pompeianus refused — like Crowe’s character, perhaps, he was reluctant to assume this kind of power.

In his youth, Marcus Aurelius was also friends with an older Roman general, a Stoic, called Claudius Maximus, who became a mentor to him. Marcus remembers him as being a highly self-disciplined, focused, plain-spoken, and down-to-earth man. Some of his traits appear relevant to Crowe’s similarly-named character:

[I learned from Maximus:] to be master of oneself, and never waver in one’s resolve… to set to work on the task at hand without complaint. And the confidence he inspired in everyone that what he was saying was just what he thought… never to be surprised or discontented; and never to act in haste, or hang back, or be at a loss, or be downcast, and never to fawn on others… To give the impression of being someone who never deviates from what is right rather than one who has to be kept on the right path; and how nobody would ever have imagined that Maximus looked down on him, or yet have presumed to suppose that he was better than Maximus… — Meditations, 1.15

In an ancient novel called The Golden Ass by Apuleius, a contemporary of Marcus Aurelius, the same Maximus is described as a highly disciplined Roman statesman and general, with extensive military experience, committed to the Stoic philosophy of life.

Perhaps this was unintentional, but Crowe’s Maximus character seems like a hybrid of these two real-life Roman generals, Pompeianus and Claudius Maximus, combining some aspects of the former’s life with some of the character traits attributed by Marcus to the latter.

Although there are references in Gladiator to Marcus Aurelius being a philosopher, Stoicism is never mentioned by name.

My father spent all his time at study, reading books, learning his philosophy. — Commodus, Gladiator

However, we can probably discern three obvious references to ideas from Stoic philosophy in the script. The first is a sort of negative allusion, where Commodus is talking about the virtues he lacks:

You wrote to me once, listing the four chief virtues — wisdom, justice, fortitude, and temperance. As I read the list I knew I had none of them. But I have other virtues, Father… But none of my virtues were on your list. Even then it was as if you didn’t want me for your son. — Commodus, Gladiator

Anyone familiar with Greek philosophy will recognize these as the four “cardinal virtues” associated with the Socratic tradition, especially Stoicism. Notice that Commodus says that Marcus wrote to him of these virtues, which he actually wrote of many times in The Meditations.

In a 2003 article about Gladiator and Stoicism, the philosopher John Sellars has argued that the most Stoic character in the film is actually Proximo, portrayed by the late Oliver Reed. While training his gladiators, Proximo says:

Ultimately, we’re all dead men, sadly we cannot choose how, but we can decide how we meet that end in order that we are remembered as men. — Proximo, Gladiator

Apart perhaps from the concern with how they are remembered, this sounds very much like typical Stoicism. We should accept our own death as natural and inevitable, placing more importance on how we choose to meet it than upon the event befalling us itself.

He also says to Maximus:

Proximo later repeats the phrase “shadows and dust” to himself as he meets his own demise, being encircled and executed by Commodus’ guards. It might remind us of passages such as the following:

Let your thoughts constantly dwell on those who have been greatly aggrieved at something that came to pass, and those who have achieved the heights of fame, or affliction, or enmity, or any other kind of fortune; and then ask yourself, ‘What has become of all that?’ Smoke and ashes and merely a tale, or not even so much as a tale. — Meditations, 12.27

Shadows and dust; smoke and ashes… Finally, toward the end of the movie, Maximus laughs as he says to Commodus:

I knew a man once who said, death smiles at us all. All that man can do is smile back. — Maximus, Gladiator

Commodus sneers “I wonder. Did your friend smile at his own death?”, to which Maximus replies “You must know. He was your father”, thereby attributing the saying to Marcus Aurelius. There are no direct quotations from The Meditations in Gladiator but some commentators have seen this line as resembling a loose paraphrase of the book’s final sentence:

So make your departure with a good grace, as he who is releasing you shows a good grace. — Meditations, 12.36

It’s also been compared to a passage near the start of the book, which concludes:

[Seek to die not] with complaints on your lips, but with a truly cheerful mind and grateful to the gods with all your heart. — Meditations, 2.3

In any case, although phrased somewhat differently it’s fair to say that Maximus’ line in the movie about smiling back at death captures a typical idea from The Meditations of Marcus Aurelius.

Marcus and Stoicism in Gladiator 2

We know very little as yet about the sequel to Gladiator. However, I’m hopeful that we may see a few more traces of Stoicism in the movie for the following reasons. First of all, it would seem only natural for the character of Lucius to make allusions to his deified grandfather, the emperor Marcus Aurelius, much as the characters of Maximus and Proximo did in the original film.

At the end of Gladiator, both Commodus and Maximus are dead. Lucius Verus, Marcus’ son-in-law, adoptive brother, and the father of the boy Lucius Verus II had already passed away before the start of the movie. So it’s not clear where that leaves things regarding the succession. Perhaps, as Marcus requested before he died, Rome will return to being a republic, although that might be too much at odds with the real history of events. Perhaps the boy Lucius is perceived as the rightful heir to the throne, although during this period, at roughly twelve, he’d probably have been considered too young to actually assume the position of emperor. Perhaps, therefore, someone steps in and seizes power, becoming either emperor or dictator of Rome — that would seem the most likely scenario to me. It would make sense dramatically because it would leave Lucius disenfranchised from the imperial succession, most certainly placing his life in danger because he’d be perceived as having a rival claim to the throne. He’d probably be forced into exile if that’s the case.

Lucius’ mother Lucilla was still alive at the end of Gladiator. By the time of the sequel, she would be aged roughly 55–60. Unless she’s passed away between times, we’d naturally expect to see her and it would be surprising if she didn’t at least mention her famous father, especially as the events surrounding his death presumably set the stage, in part, for this episode in the story. So it seems likely to me that Marcus Aurelius will at least be mentioned in the new movie and if they’re going to do that, as in Gladiator, it’s arguably a good opportunity to throw in some more hints of the philosophy for which he was famous.

I recently wrote a book called How to Think Like a Roman Emperor: The Stoic Philosophy of Marcus Aurelius. In fact, I’m currently working on a graphic novel about the life and philosophy of Marcus Aurelius, due for publication by St. Martin’s when it’s complete. So I’m eager to see Gladiator 2 when it’s released because I’m very interested in this part of history. Although it only really hinted at ideas from Stoic philosophy, I know the first Gladiator movie did encourage a great many people to learn more about Marcus Aurelius and The Meditations. So perhaps the sequel might also have a similar effect.

FacebookTweetPinEmailShares207
wpDiscuz
0
0
Would love your thoughts, please comment.x
()
x
| Reply
Share this ArticleLike this article? Email it to a friend!
Email sent!