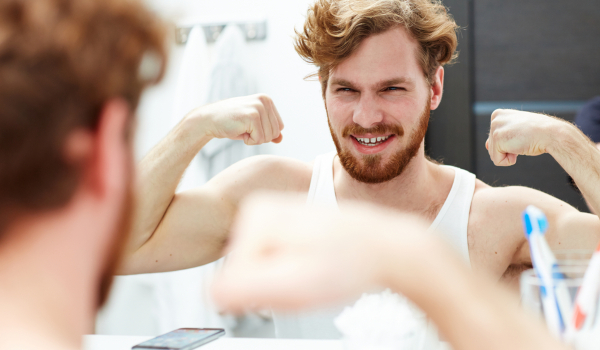 About 15 years ago I could bench press 245 pounds. That was about 100 pounds above my body weight: A decent lift. In Aikido I can throw the 250-pound man to the mat. Not bad. Could be better. Yet, all that doesn’t make me strong. That really doesn’t make a profound difference in life. No, not really.

For a good deal of my life, I saw myself as weak: I wasn’t good enough. That sourced more from my childhood, where Dad scared the hell out of me. No, being 8 years old, I wasn’t strong enough to stand up to him. My story from the past: I disappointed Dad. I was ‘weak’, because I was like my Mom, not like him. Dad yelled at me, “You’re just like her!” No, that wasn’t intentional props from Dad, in any interpretation.

So I pursued weight training. I met my buddy Charlie at the YMCA, who was very knowledgeable about weight lifting and bodybuilding. Given my nature, I went all in. I got stronger. Yet, stronger will never be strong enough, by definition. Just saying.

One day Charlie asked me if I wanted to check out an Aikido class in West Los Angeles. Cool. I said, “Yeah”. You see, Mom made me take Aikido when I was 12 years old. I was the short, nerdy fat kid, not good at any sports. Yet, something about Aikido clicked for me. I was actually good at it. And I liked it, too.

However, I gave up Aikido training when I attended the all-boys private college prep school. My parents paid a lot of money at that time. I thought I needed to quit Aikido to concentrate on my studies. I would forsake my dreams of becoming a black belt. Too bad. That was about 14 years ago.

We watched the Aikido class, which was actually a seminar with a Sensei from Japan. I liked what I saw. Both Charlie and I signed up to take classes. That’s how I eventually met Sensei Dan.

Although Sensei was over thirty years older than I was, he was so strong. He was powerful. Sensei didn’t say a whole lot. He was no bullshit. I got that I could learn a lot from Sensei. That began our 25-year journey together.

Sensei saw that I was a lot stronger than I knew. He really didn’t care about physical strength. Sensei was about putting in my time. Coming to class. Repetition. I did techniques over and over and over and over, again. His mantra: “Just train.” Unlike my dad, Sensei gave me something to use.

Sensei wanted his students to look within, develop their strength inside. Sensei wanted us to build character. Thomas Hardy said, “Character is fate.” So just train.

That became oh so transparent during my Nidan (2nd-degree black belt) test. Five bigger stronger black belts chased me around the mat for a couple of minutes as I tried to evade the attack or throw them to the mat. I was fucking tired. It wasn’t about technique. I just had to hold on a little longer than I thought I could.

That’s what Sensei was looking for. Yeah, I passed that test. Because of Sensei, I became Yondan, 4th-degree black belt.

About 4 years ago, I began seeing my therapist Lance, when I suffered from depression. I had gotten laid off from my Systems Engineering job. I found what I thought was a cause in my next job, in a completely different field. However, the company execution and subjective business narrative betrayed the cause, at least for me. That resurrected my unreconciled childhood fears of my Dad: Not being good enough, rather just not being enough.

In my throes of depression, Lance reminded me of all that I had accomplished in my life. Initially, I thought that was utter bullshit. Then I started to look deeper within. I remembered what Sensei taught me about being strong. He said, “Just train.” I had to grind this out. I had to look at what frightened me. So I began to do so. I took my baby steps in healing myself.

While watching “The Edge of Seventeen” over the Thanksgiving Holiday, I had an epiphany. Poignant Hailee Steinfeld’s 17-year-old self-loathing Nadine tearfully confessed to her older brother Darian, played by compassionate Blake Jenner:

You know, ever since we were little, I would get this feeling like… Like I’m floating outside of my body, looking down at myself… And I hate what I see… How I’m acting, the way I sound. And I don’t know how to change it. And I’m so scared… That the feeling is never gonna go away.

I got it. I was Nadine. I really needed to love me and to give myself a fucking break. I needed to be kind to me. Or at least stop hating on me. I had to “Just train” to love and forgive me.

The strength that makes a difference starts with loving and forgiving myself. O-Sensei said, “True victory is victory over oneself.” After nearly 50 years of hating on me, I had to be kinder to me, and forgive me. As we forgive and love ourselves, we discover that we’re a lot stronger than we know. Rather, we were always strong but had dismissed that.

So I’ll still hear that voice in my head saying, “Jon, you suck!” When I do, I listen for Sensei’s voice, “You’re a better teacher than me.” I hear Mom, “I’m proud of you.” Yeah, that’s the strength that makes a difference. Just saying.

END_OF_DOCUMENT_TOKEN_TO_BE_REPLACED

Facebook33Tweet1Pin1EmailShares35
wpDiscuz
Share this ArticleLike this article? Email it to a friend!
Email sent!