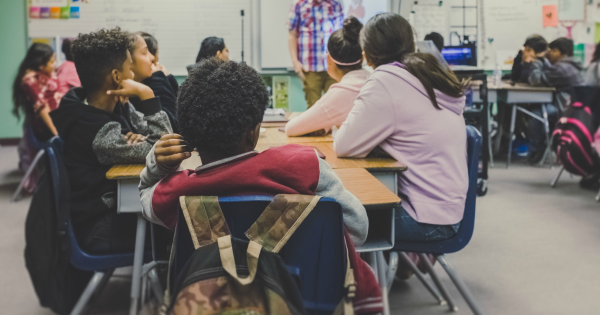 For four years I was a junior high school teacher in a primarily low-income area of Los Angeles in two of the most ethnically diverse schools in the district. Here homes and housing tracks were interspersed with industrial and chemical plants—twice we were put on evacuation alert with the threat of a chlorine gas cloud. Junior high school students were completely honest, emotionally labile, silly, noisy, mischievous, affectionate, needy.

I loved them immediately; I grew to hate the institution over time. This experience and my students taught me many things for which later my social welfare education would give me labels and theories to explain. The first hard lesson was “blame the victim.”

As a new teacher, I was given the classes filled with the students the other teachers did not want. One such class was my seventh-period geography class, a class of 42 students in a room with 40 seats. This was not a problem, because there was never a day when all 42 students showed up.

The students in this class were seventh graders reading at a third grade level. Among the students was a boy who if I took my eyes off of him would crawl on his belly and pinch girls’ legs, another who one day on a dare jumped out the window (luckily we were in a first floor bungalow), and another who was removed to attend a fire department class after lighting matches and tossing them out the window. My job was to interest this group in such things as which city in France was famous for manufacturing cheese.

At the end of the first ten weeks, it was time for report card grades. Doing what I had been trained to do in my education classes and expected to do by the school district, I added up test, quiz, and homework grades to arrive at a final grade. Given the classes I had, despite their own and my efforts, many of the students received a D or an F on their report cards that day.

I remember one student in particular and even her name because her last name was Lechuga, which means lettuce in Spanish. She was a sweet little bird of a girl, a 12-year-old who looked about 10, with a beautiful little face and her hair tied in a knot at the top of her head that made her look like a Latina Tinkerbell. She handed me her report card and I wrote DSE across it and handed it back to her.

She took the card, smiled at me and politely said, “Thank you, Miss de Anda.” At the end of the day, I closed and locked my doors, then put my head on my desk and cried for half an hour for what I had done to my students. My view of teaching changed forever that day.

It was clear that the educational system had failed these children year after year, but turned the blame on them with the rows of D’s and F’s that filled their report cards. It was also clear that this meant I had to choose sides; I chose the kids. From then on, the needs of the children directed my teaching, and I learned to begin “where they were at” even before a social welfare dictum told me that was the logical place. Teaching became a subversive activity, and I locked my doors once the children were inside my classroom.

I tailored each lesson plan, each exercise, each homework assignment to make sure that the students found learning to be a successful experience. I stayed up until the wee hours of the morning creating and typing worksheets on ditto masters (these were pre-computer days) specific to the reading levels and abilities of each class. I devised learning activities that made learning fun for students for whom the classroom had offered one crushing defeat after another.

As I went on to teach undergraduate and graduate students at the university for more than thirty years, I took the lessons I had learned as a junior high school teacher with me. I never forgot that I needed to start “where they were at” and build on this knowledge base. I recognized that I was teaching a “person,” not just a “student,” and that they had valid priorities beyond the classroom.

And so, I refused to go along with colleagues who lowered grades for papers turned in late (the content was what mattered, not an arbitrary timeline) or students tardy to class after fighting a losing battle with L.A.’s freeway gridlock. Ill students could get a xeroxed copy of the lecture they missed rather than be punished for not dragging themselves to class.

What I found, from the junior high school to the doctoral student, was that this flexibility based on student needs did not result in their “taking advantage of me” as colleagues warned. To the contrary, it resulted in their expending greater effort to match or repay my efforts on their behalf, and the breadth and depth of the content were never sacrificed by me or by my students.

I never abandoned the adolescents who had taught me how to teach and had let me see the barriers in their lives and environment that interfered with their learning. My career involved training social workers to recognize and attend to their needs. And I continued to listen to the youth whose stories guided my development of programs that taught them to deal with the violence and stress in their environment and my efforts to help teachers recognize that education is not just an intellectual process, but needs to address the whole person.
—

Photo by NeONBRAND on Unsplash

Facebook26TweetPin1EmailShares27
wpDiscuz
Share this ArticleLike this article? Email it to a friend!
Email sent!