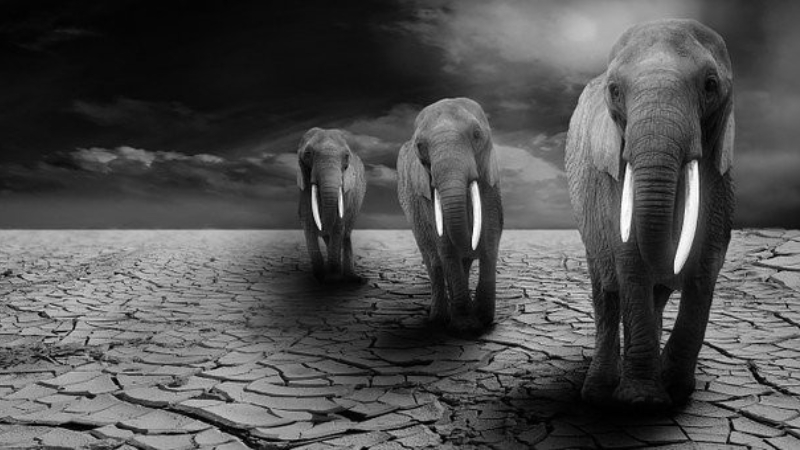 Years before “An Inconvenient Truth”, the Internet sounded the alarm for those of us who talk to Inuit or Athabascan Indians.

Animals, they said, were turning up in the wrong places or at the wrong times or failing to turn up at all. For people who still practice subsistence hunting, such things are hard not to notice. Later, buildings situated on the permafrost began to lose their perma — everything from cracking walls to entire buildings sliding downhill.

I took the remarks about the animals seriously. My grandmother used to say that the chickens were better fixed to warn us of an approaching tornado than the weathermen on the Tulsa TV stations. While I no longer keep chickens, I think she had a point. Animals seem to know a lot more about the weather than most modern human beings are equipped to learn from them.

It was based on alarms from other species in the frozen north I applied to learn enough to speak in terms the settlers would take to be more credible. I got picked for one of Al Gore’s early classes in Nashville to go out and show the slides that were continuously updated since An Inconvenient Truth.

I threw in with the scientific method as a youth and I’ve never backed off it as a method of policy analysis. My academic bailiwick is the linkage between social science and law, which is not as robust as the claims settlers made when justifying their right to make policy without regard to indigenous ways of understanding.

The data told me that earth was presenting humans with some kind of disturbance in the far north. My traditional understanding was and is that there is only one earth and it is subdivided by ecological niches, not lines on a map. The radical change happening was not “bad” in some cosmic sense, but it was threatening to humans accustomed to their niche and the change was not likely to remain localized.

I was hoping Mr. Gore was offering a scientific explanation for those of us who are not subsistence hunters with buildings on permafrost. Anything Mr. Gore told me was easily fact checked from the world class research library at Indiana University.

I learned that a one degree rise in temperature at the equator could translate into twelve degrees in the polar regions, that the earth moves heat to the poles on currents of air and water just as the earth “breathes.”

(1) It’s not problematic and we are getting alarmed over part of a natural cycle.

(2) Climate change has gotten dangerous but the danger is not caused by human beings and the cycle will revert to the mean on its own.

(3) Climate change is an existential danger to human civilization and is caused by human beings but the problem is so huge we really can’t do anything about it.

Most Indians, I quickly discovered, breeze right past (1) and (2). They have already noticed that the weather has been out of whack. They have blood memories of major ecological catastrophes caused by the settlers long before the term “ecological” was coined.

The Kiowa know that human beings caused the buffalo to go away. Spokanes have been missing the salmon, and they understand it’s not because the salmon just decided to leave. The Makah ceremonial cycle around the whale hunt almost went extinct when it had to be banned for years to protect the whales.

Let me be clear that I would not advocate allowing a species to go extinct — but when a threatened species has rebounded to the point taking a few animals under a rigid permit system is possible, I will advocate for the people who have subsisted in balance with the threatened animals for generations getting the first permits.

My childhood view of human environmental depredations was colored by the oil boom and how in those days the oil companies were not forced to care about the waste products of drilling.

Migratory birds drowned in oily water and foul stinks in the air were the price of getting rich, or at least some people getting rich. Natural gas, not having the market value it (sometimes) has today, was simply flared off, lighting up the night among the oil derricks that were emblematic of the “new” Oklahoma.

So Indians understand that the climate is changing and people have the power to change it and no better sense than to let it happen. That third problem has a peculiar spin in Indian Country. It’s not so much that nothing can be done as an attitude that we are not responsible and therefore it is not our problem. The white man broke it and he should fix it.

The Indian spin is certainly true, but the fact is that fixing it is everybody’s problem, whether that’s fair or not. It’s also true enough — as the naysayers use Indians to make fun of environmental progress — that if we all lived in tipis and gave up electricity and air conditioning and went back to riding horses, our CO2 release would diminish considerably. Think Amish: no electronics and travel by buggy.

Admitting to the truth in that bit of ridicule does not mean an 18th century lifestyle is what will be required. It’s true that we will have to give up some things to maintain the sort of habitat to which humans have adapted, but it’s up to us which things to give up. The main thing we have to give up is greed. Every human being, every family, city, state, tribal nation or continent has a “carbon footprint,” an amount of carbon we put into the atmosphere because we live and because of how we have chosen to live.

Human beings in the U.S. have the most extensive carbon footprints in the world. Can anyone suggest a moral justification for this? Is it nothing more than we get to consume more of the commons because we have the power to take more than our share?

Human beings, collectively, will either learn to let the science of climate change drive public policy or the climate will become, in many parts of the world, no longer adequate to support life. Shekhar Chandra wrote for CNN:

Experts at the Massachusetts Institute of Technology (MIT) say that even if the world succeeds in cutting carbon emissions, limiting the predicted rise in average global temperatures, parts of India will become so hot they will test the limits of human survivability.

Parts of the Middle East are already testing those limits, and heat waves kill people even in the U.S. every year.

In 1969, faculty and students at MIT started a non-profit organization called the Union of Concerned Scientists for the purpose of forging and maintaining connections between science and public policy. The organization is probably best known for taking on the probable results of a nuclear exchange among the superpowers, but it also started early trying to popularize the idea of a “world carbon budget.”

The purpose of the carbon budget is to calculate the amount of CO2 the entire planet can spew into the atmosphere without exceeding the temperatures that will have dire consequences for everybody.

The Union of Concerned Scientists proposed a world carbon budget that they claimed would reduce the chances of catastrophic climate change to 50–50. All the industrialized nations could release 700 gigatons of carbon between 2000 and 2050 with 160 gigatons apportioned to the U.S.

Sticking to U.S. habits just after the turn of the 21st century would mean the U.S. would be allowed to emit 265 gigatons…rather than the 160 gigatons that would give the world 50–50 odds of avoiding catastrophe if and only if the rest of the world did not exceed their share of the world carbon budget.

What could possibly go wrong?

The strongest carbon control bills introduced in Congress would have gotten us under 265 gigatons. There was not even an attempt to hit 160 gigatons.

So what, when even if there were legislation passing to deal with the problem, President Trump would not sign it into law. Say this slowly and out loud to have a chance of getting your head around it better than I have:

The President of the United States thinks climate change is a matter of belief rather than a matter for measurement. Since he does not believe in climate change, it is not a problem.

The Union of Concerned Scientists has passed the carbon budget baton to the Intergovernmental Panel on Climate Change, although they continue to follow the issue on their blog.

There has been ample discussion but very little legislative action. Most organization on the ground has given up on prevention and taken up mitigation. Lots of ink has been spilled over climate change to little avail. It appears that lots of tears will follow before anything effective is done.

So you can see that our relatives up north were correct, the animals are going crazy. The two-legged animals.