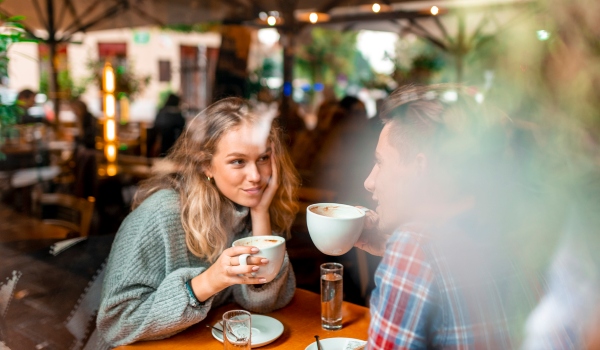 —
That awful, awkward silence that happens sometimes on a date. You know exactly what I’m talking about.

You’re sitting there on a date. You’ve been looking forward to this date. You’ve build up a whole fantasy in your mind about this person. You really think that this is going to be the woman (or the man) for you.

Now they are sitting there next to you. After about twenty or twenty-five minutes, however, the conversation just kind of dies. Then there is that awkward silence.

It’s funny. When you’re with somebody for a long time, you have what people call comfortable silence. In the first twenty minutes or half hour of the beginning of this so-called relationship that you were so sure was going to happen, though, it’s called an awkward silence.

So what do you do in that situation?

At those moments, it’s time to make a joke. Just look the person in the eyes and say, “We’re having our first moment of comfortable silence together. It’s so nice, isn’t it? It’s like we’ve been together for a long time. Here we are. We’re both eating our burgers right now, and we’re having that comfortable silence that people have who have been dating for like six months. Don’t you feel it, too? Aren’t you as comfortable as I am right now?”

Now, sometimes, there is silence on a date for another reason. Maybe twenty minutes or a half hour into the date you realize that there may not be as much chemistry between you as your mind had imagined there would be.

In that case, that awkward silence may be because of a total lack of chemistry. You can play that situation two ways.

One, you do the thing that I actually told you to do, i.e., make a joke about it, and then try to finish the date as enjoyably as possible. Two, you can look at the person and say, “Hmmm, do we have a lack of chemistry?” Since I don’t suggest going with the second option, I recommend you go with the first option.

This post was previously published on Davidwygant.com and is republished here with permission from the author.