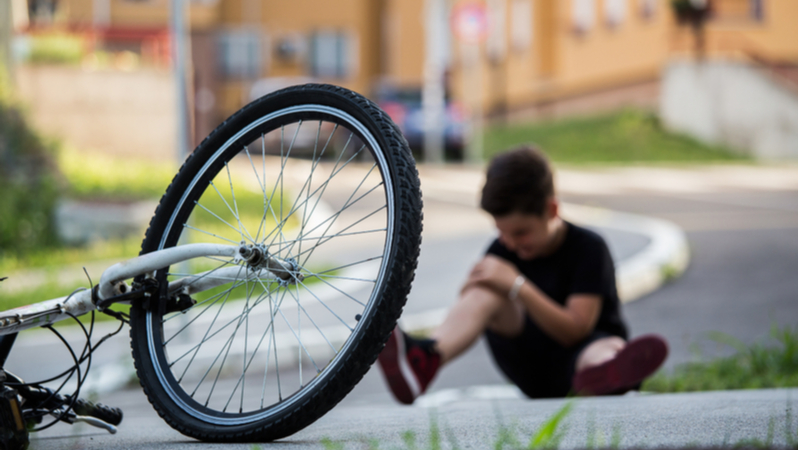 Inside my third-story apartment, I was half-heartedly cleaning while listening to music. Another pristine spring day, another day of COVID isolation.

Outside my window and across the street, I saw a group of kids on bicycles chasing each other through an empty parking lot. Two of the kids jumped off their bikes and dashed down a grassy hill. They leaped over a dry creek bed and scampered up another hill into a field. A third kid—a boy—gave chase down the hill, but he mistimed his jump and landed full force on an awkwardly bent leg.

Through my closed window I could hear him scream.

His friends rushed to his side. The boy lay on the ground howling yet not moving. The street near the parking lot was normally full of traffic. But on this day, with so many in doors, it was deserted. I wondered if I was the only person to witness this.

I waited several seconds too long before grabbing my shoes and bounding down three flights of stairs. When I crossed the street, I saw five kids in total, boys and girls, all huddled around the crying kid who was still sobbing loudly, clutching his leg. They were probably between the ages of eight and ten, the same age as my kids. The boy’s leg was still bent. He had not even attempted to lift himself up from the dry creek bed.

When he saw me, he said right away that he thought his leg was broken. “Yea,” I said, “I think so too. I saw the whole thing.”

I struggled to remember my first aid training from my military days. Is anything bleeding? Am I supposed to ask his name? Where exactly does it hurt?

“It hurts from down there to up here,” he answered, tracing his finger from his ankle to his knee. I could not see anything protruding — a reassuring sign. I went to touch his leg but halted. My hesitation surprised me.

Without realizing I had broken the six-foot barrier of social distancing which by now had been beaten into me. It was also the closest I had been near anyone who was not related to me in weeks. My other doubt was the perception of a strange man standing in a field among a group of distressed kids.

What if someone pulled up and only saw the commotion and then me? I was stunned to see how quickly my mind formed a coherent alibi, just in case this entire situation went sideways.

Then common sense kicked in. I pushed back the doubt and reached for the boy to help him to his feet. He howled so loudly that I encouraged him to lay back down.

I asked the kids where they all lived.

“Around the corner, up the hill,” they replied almost in unison.

“How far away are your parents”, I asked. “If his leg is really broken, we should probably call for help.” I pulled out my cellphone and started to dial.

The kids responded breathlessly that they weren’t supposed to be playing outside. And they were definitely not supposed to be in this parking lot. If their parents found out, they would be in huge trouble.

A rapid debate broke out about what to do next.

A slightly older boy emerged as the leader. They would get their buddy home and put ice on his leg.

“You get the ice from the refrigerator,” he says pointing to the girl. “Make sure you find something to wrap it, like a towel.”

Another girl chimed in, “We can come around to the house the back way… and you,” she said, pointing to another boy, “can go ahead to see where our parents are.”

Spurred, perhaps, by the reality of facing angry parents, the injured boy powered through pain and tears to stand up on one foot. Together, we helped him hop back to the bicycles in the parking lot. Well, this is another good sign, I thought to myself. If his leg was really broken, he probably wouldn’t be hopping on one leg. Hopefully it’s just a very bad sprain.

In a moment of tenderness, I pictured my younger self exactly in these kids’ shoes. Probably pent up in the house on a gorgeous spring day. No school. Stressed-out parents thanks to a crazy virus. The last thing anyone needs right now is a trip to the hospital. Of course I didn’t want them to get in trouble. Yet being a parent myself, I weighed this outcome against the possible negligence of allowing these kids to depart into greater harm.

The kids rallied. They encouraged their comrade every hop of the way. One of them wheeled the boy’s bike up so he could use it as a crutch. All of them thanked me several times.

I was not sure I had done anything. Maybe all the situation needed was a caring adult presence to calm their shock.

I watched as the group formed up In solidarity. They all walked their bikes slowly out of the parking lot, flanking their injured comrade on all sides to conceal his limping from the outside view. Again, I remembered being a kid. Oh the cunning logistics of escaping adult wrath.

I turned and walked across the field towards my apartment. As I got ready to cross the deserted street, the older boy yelled to me in a loud voice, “Thank you again, Mister. I hope you have a very nice day!”

I looked back, and with a smile, I returned his salutation.
—