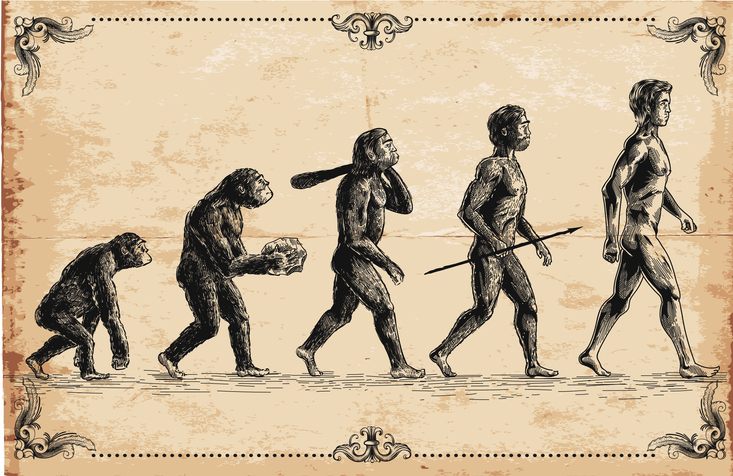 It’s bred into your blood for literally a hundred thousand generations. Use it.

It’s another beautiful dawn on the veldt, two million years ago. You’re an antelope. And something appears on the horizon, approaching at a steady lope. As it gets closer, you recognize it as a dangerous predator. No problem; you’re an antelope, and you’re built to run. You take off in a burst of speed that would blind most species, and the predator recedes toward the horizon.

Except that when your sprint ends, it’s still coming.

You run again. You run to the limits of your endurance, until the predator is a dot in the distance, until you can’t run another inch.

But the dot in the distance is still coming, that same steady lope unchanged.

By the time it’s close enough to make you afraid again, you’ve got enough left in you for one more phenomenal sprint, which carries you miles away in minutes.

But the predator’s still coming, and it catches up to you. And it’s got a knobbly stick in one of its gripping limbs, and you’re how that particular homo erectus feeds its family that week.

Nothing can beat it. Nothing can fight it. Some things can outrun it but that doesn’t matter. Because there’s no hack for “doesn’t ever quit” and so nothing on your veldt can compete with that two-legged, goofy-looking predator and its unbeatable strategy.

That strategy is called persistence hunting, and there’s strong evidence that it’s how we, humans, evolved as a species. That it was our first great advantage over the other species, the one that kept us going when the Smilodon and Eohippus gave way to better, more efficient models. The dinosaurs became chickens, and we became as gods. And it wasn’t language, it wasn’t binocular vision, it wasn’t even opposable thumbs. (Not that I’m complaining about the thumbs. They’re terrific.)

If you are alive and reading this, you are the heir of two million years of not quitting. Before we mastered language and learned to team up better than anyone, before we mastered weaving and made the baskets that made us the best hunter-gatherers in the universe, before we mastered agriculture and built cities and invented civilization, we had one hack, one exploit, one superpower that made all the rest possible.

But when that happens, try this. Picture an antelope receding across a veldt faster than you can run. You’ll never be as fast as the antelope, and it knows that. It thinks it’s safe, it thinks you’ll starve, because you can’t outrun it.

You are better at not quitting than anything that has ever lived on this planet. Just remember that.

For more of the story, read “Born to Run”.

Gee, that puts us right up there with the wild dogs of Africa, wolves and other predators. Who would have thunk that?

It only took reading two posts for me to decide to subscribe to this blog. I can’t wait to dig in and explore the site further!

Interestingly there is another superpower that enabled that persistence, and that is a human’s ability to cool it’s body by sweating. No other species has such a highly developed ability. This is why a cheetah often will lose its prey after it catches it. Although it can run up to 55 mph, the cheetah must wait up to an hour to allow its body temperature to cool. The homo sapien chasing that antelope is able to continue the chase due, in large part, to his ability to thermoregulate more efficiently than its prey.

Saying that we’re tenacious is all well and good, but I’ve always thought the real interesting aspect of that story is the science behind what enables us to go for so long. The biggest factor is our lack of body hair and sweat glands. It allows us to shed heat through our whole body, whereas an antelope only has it’s tongue and nose as heat syncs. It’s not about tenacity so much as it’s that we didn’t overheat and shut down our brains while our prey did. There’s also something to be said for running barefoot too.

Why do Americans always romanticize hunter-gatherer societies? I suggest they travel to Africa and look around. Get a grip. 🙂

Africa after colonial exploitation and deforestation is not a good representation of the way indigenous people live.

back in those days, hunter-gatherer society was the top. it isn’t our ancestor fault that the others subsequent way of life where more efficient and effective…

We had superior cardiovascular endurance. We used that adaptation to our advantage to hunt, because if we didn’t we would starve. Persistence to survive is shared by all species that have ever existed, and isn’t exclusive to humans.

I’ll thank my ancestors for running, and running well.

This brings to mind one of my favorite quotes:

While I concur with what John Hardman says, the perspective that not-quitting is a super power is, well, simply superb! I am going to start using that to motivate myself to do things I always gave up on! Like getting up in the morning to run! Also, John, intelligence is not necessary for survival. Before all our creativity and all our philosophising, comes the basic tenacity to live. Intelligence maybe a side effect of many things and we destroying our planet and ourselves maybe a side effect of intelligence as well; at least the limited intelligence we have. But, take… Read more »

If you’re a “naked ape” as Desmond Morris tagged us, yes intelligence is necessary to survive. We call ourselves homo sapiens, humans who think, because that is what set us apart from all other animals. We live in a symbolic world beyond our natural world and because we are so weak and vulnerable, we tend toward being hyper vigilant and hyper active. It is this drive, channeled into creation of symbolic meanings that drive us to create lives beyond simple survival and procreation. In fact, we will sacrifice our survival for our symbolic structures (tribe, country, flag, religion, etc.) rather… Read more »

“:Also, John, intelligence is not necessary for survival.” Completely wrong. Our intelligence is unique and is the ONLY reason we not only survived, but thrived. Example: Primates typically spend 9-12 hours a day FEEDING. That’s eating, looking for food and digesting the food, sometimes all at the same time. We used our intelligence hundreds of thousands of years ago to use our first human tool, which is fire (not weapons, tons of animals use inanimate objects as weapons). We used fire to cook food, which is good for predigesting it and killing harmful bacteria. That’s one of the main reasons… Read more »

I wouldn’t call persistence a “super power”. My cat will sit at a gopher hole for hours waiting for her persistence predator moment, yet cats never evolved past being the consummate predators that they are. Besides, humans are more than mere predators. We are homo sapiens or “thinking” hominids. We persevered because we could create symbolic goals beyond mere existence. Our super power is to imagine goals beyond just sitting in front of gopher holes waiting for vermin to appear. My cat is a far better and more persistent predator, but it was our ancestors that elevated the cat to… Read more »

Facebook11kTweetPin22EmailShares11k
wpDiscuz
Share this ArticleLike this article? Email it to a friend!
Email sent!