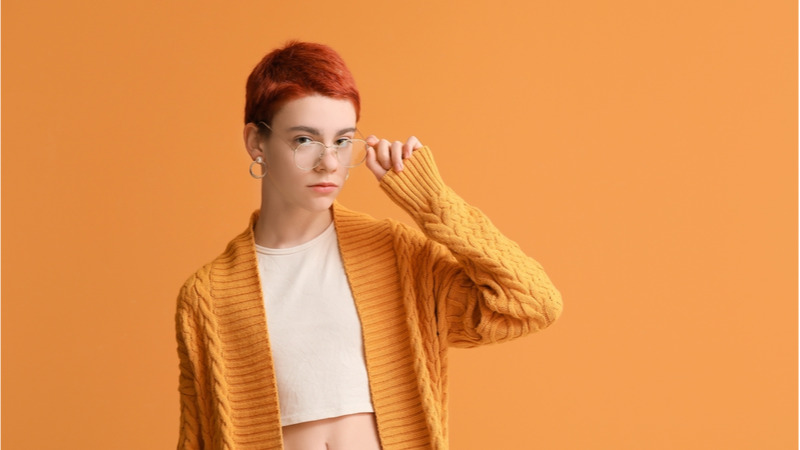 So you’ve got the 101 stuff out of the way. Gender and sex are different. There are more than two genders. Non-binary people exist. It’s not a phase, and we’re here, and we’re queer.

You might be thinking, “Awesome! Now I know all the things I need to know, and I can go forth into my allyship without anything else to worry about!”

Uh, I appreciate your enthusiasm, but not so fast…

I am sad to report that I am still hearing weird, inaccurate things about my gender. Even from allies, no less! I thought we had an understanding here, y’all.

Non-binary folks are still being dehumanized and misunderstood, and it’s time that we address it, especially within the communities that work to advocate for us.

And yes, your words do matter. These myths matter. Myths around my lived experience hurt – a lot – because they often make me, and so many others, feel mocked, invisible, and invalidated.

That being said, I’m still kind of excited to unpack those myths, too.

As our lives become more visible, and folks begin to think about a/gender more deeply and more critically, we’re bound to encounter more misconceptions and more questions about our community.

Call me an optimist, sure, but I think of this as a sign of progress – that people took something away from the conversation, and now they’re coming back to the table with an eagerness to learn more.

Welcome back to that table. Refreshments are to your left. Please make yourself at home.

And let’s talk about some of the myths that I’m still hearing about non-binary folks.

1. Non-Binary Isn’t a Gender by Itself – It’s More an Expression (Or, You’re Still Technically a Man or Woman)

Hold up! Non-binary folks aren’t “technically” any gender but the one they’ve identified with.

A quick definition of gender, so we’re on the same page: Gender is a sense of self that we realize and express through the lens of culture (namely the ideas of masculinity, femininity, and androgyny).

It’s what we feel inside,  compared with and contrasted against what we’ve learned, to help us understand who we are. Got it?

It comes from this really intense fixation with the binary – that only two genders are the “true” and “real” genders, and everything else is secondary, or a varying shade. You’re saying that you don’t actually recognize our gender at all – that you still place us in the binary, a binary that we’re not comfortable with and don’t identify with.

Being non-binary isn’t a costume. It’s an identity, like yours. It is just as valid as “man” or “woman.” Being “different” than the cultural norm does not make it less sincere or valid.

I’m not a man or a woman – not on the surface, not at the core, and nowhere in-between.

I am literally just genderqueer.

We exist in a system which only acknowledges binary gender. It’s up to us to challenge that system, and validate non-binary people. That starts with recognizing our genders as equally legitimate and valid, and to resist placing us back in that oppressive binary.

It’s about reclaiming your gender (or lack thereof) from the restraints of “man” and “woman,” and, instead, expressing yourself in whatever way feels good and authentic for you.

To get a better understanding of this, though, there are some things to keep in mind here.

Firstly, physical appearance and expression don’t actually tell us anything about a person’s gender, although sometimes it can hint at it. Gender is about identity, right? And while we can certainly express our identity with our clothing, there isn’t necessarily a connection between what’s on the outside and what’s on the inside.

So, really, a non-binary transition could look any sort of way.

The second thing to keep in mind is that when we’re talking about non-binary folks, it doesn’t necessarily mean removing every trace of femininity and masculinity. For some non-binary peeps, it’s all about playing with gender expression and breaking the “rules.”

And that doesn’t necessarily mean that all non-binary people want to appear “gender neutral.”

Folks often conflate a “gender neutral” appearance with being non-binary, but in fact there are hella diverse expressions of gender within our community!

Not necessarily! Some NB folks certainly feel that way. And others don’t.

How many times do I gotta tell you about my agender siblings?

There are plenty of non-binary folks who simply do not have gender. They don’t experience gender and thus don’t identify with it. They aren’t “in-between” anything; they are entirely outside of it.

It’s kind of arrogant to say that people can only understand their gender in light of these binary identities – man and woman – as if they are the only valid points to examine, reflect on, and experience.

There are plenty of people whose genders do not rely on those concepts to be understood or expressed.

4. All Non-Binary Folks Use Gender-Neutral Pronouns

I am a non-binary person, and I use he/him/his pronouns. The short answer as to why: I feel empowered when people must consistently affirm my masculinity when their gut instinct is to gender me as a woman.

It feels awesome to have a not-often-perceived part of myself acknowledged when people talk about me.

Other non-binary folks use more neutral language, like they/them, ze/hir, and others, to reflect that their gender exists outside of those binary categories. That’s a totally valid choice, too.

Every non-binary person has their reasons for the pronouns that they use –whatever they are!

The thing to keep in mind is that pronouns are simply words, and anyone can use them for a variety of reasons. Pronouns don’t necessarily correlate with gender identity or expression because no gender has ownership over a set of pronouns.

Non-binary folks aren’t any less valid if they opt for he or she pronouns. Whatever the reason, our identity is legitimate no matter what.

5. The Only Non-Binary Bodies Are Able, White, and Thin

Maybe you haven’t said this explicitly – I really hope you haven’t – but I’m including this on the list because your behavior might be reinforcing this idea, or you might hold this idea without realizing it.

When I ask you to picture someone who is androgynous, what do you see?

There is a prevalent (and harmful) idea that the only valid non-binary or androgynous bodies are those that are thin and white and able-bodied. And as a result, a lot of the non-binary voices that we amplify (and photos that we repost – I see you, Tumblr!) often end up being from white, thin, able-bodied people.

And while that may feel innocent enough, it creates a power dynamic in our community. It privileges an already privileged group of non-binary people over those of color and size and disability.

And yes, all the intersections in-between and within need to be visible and present.

The only qualification for a body to be a “non-binary body” is that the person inhabiting that body identifies that way.

And if our community is going to be visible, we need to uplift everyone – not just the bodies that society tells us are valid, but every body, every damn beautiful body, because every one of us is valid.

6. Non-Binary Is Just a Pit Stop on Your Way to a Binary Transition

It’s true that some folks do identify as non-binary or genderqueer somewhere in their journey, and they don’t always stick around – and that’s entirely valid, too. Gender is fluid, and sometimes our experience with it shifts.

But the point is, that isn’t the case for every non-binary person.

And when you suggest that it is, what you’re really telling us is that our entire identity is a phase, is insincere, or invalid. And not only is that not true to our experience, but it’s also (obviously) pretty offensive.

When we tell you what our gender identity is, it isn’t appropriate to scrutinize or rename the experience for us.

It’s your job to believe us, to validate us, and to recognize us for who we are – not who you think we should be.

7. You Can’t Identify as Gay or Lesbian When You’re Non-Binary

There are a good number of non-binary folks who identify as gay or lesbian, which for most folks suggests that they must have a binary gender. This confuses people, and I’ll admit, it confused me for a long time as well.

Let me give you an example.

Let’s say we have a non-binary person who, while they don’t identify as a woman, consider themselves to be on the more feminine end of the spectrum (as they see it). They feel comfortable within the lesbian community, identify with femininity, and they are attracted to women and feminine-identified people.

It would make perfect sense, then, that they might claim the label of “lesbian.”

There are tons of other permutations that might make sense as well.

Maybe you have a bigender person who goes between two genders – neutrois, let’s say, and woman – and in their ordinary life, they identify as neutrois, but when they are having sex, they identify as a woman and have sex with women and feminine-identified people. They, too, might claim the label “lesbian.”

This might feel confusing to you, especially as an ally – and that’s okay. But what’s important to keep in mind is that confusion around this stuff is the result of needing more information around it, not the result of someone being confused about their own experience.

Ultimately, we know our identities best, and there are plenty of situations where a non-binary person might claim a sexuality that seems gendered. It doesn’t mean that they aren’t non-binary, though!

And it’s necessary to accept and support that.

There’s always learning to be done – not just for allies, but even for non-binary folks like me! That’s because our knowledge around these issues is constantly expanding and growing.

So yes, I’m sure there will be another time when I ask you to come back to the table and chat.

As allies, part of the job that you have is to remain committed to educating yourselves. Articles like these are a great first step. And as a non-binary person, it means a lot to me when allies take the time to better understand my experience and the experiences of my community.

Because at the end of the day, when we break down myths like these, we are one step closer to fully humanizing and validating not just non-binary folks, but folks of all gender expressions and identities.

And hey, that’s not such a bad thing.

This post was previously published on EVERYDAYFEMINISM.COM and is republished with permission.